Snowfall in NYC is rare. The city has an average of just two days of snowfall in December and four in January. Actual accumulation is even more rare. While the storm that hit the East Coast disrupted air travel, I was already safely on the ground in Manhattan and enjoying not one, but two days of snowfall that quickly stuck thanks to chilly temperatures barely creeping above 20°F. Naturally I headed to Central Park, NYC’s 843 acre public park, as giddy to play in the snow as the kids skipping ahead of their parents with sleds in tow. Take a look at Central Park under snow and some of the attractions not to be missed with us!

Just steps away from 59th Street, the iconic Gapstow Bridge is one of 36 bridges and archways in the park and facing south awards you with views of the famed Plaza Hotel and NYC skyscrapers rising from the edge of the open space. With postcard picture views, it’s no wonder just about couple visiting the park pauses on the bridge for a picture in front of skyscrapers reflecting on the pond. Missing Tim, who couldn’t take the time off work to make the trek across the Atlantic with me, these two mini hugging snowmen were to represent us. Little did I know Central Park would see my tweet and share the photo to literally thousands of people’s delight on Facebook and Twitter! 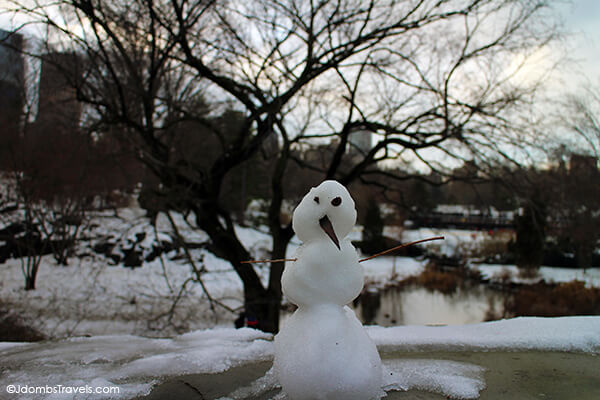 Another of my snowmen on Gapstow Bridge

I’d never explored much of the park beyond the south end and wandering into Central Park during a fresh snowfall is like wandering into a still white wilderness. I was glad to have my friend and New York insider at Walks of New York, Jeff, to lead me to some of Central Park’s further afield sights. 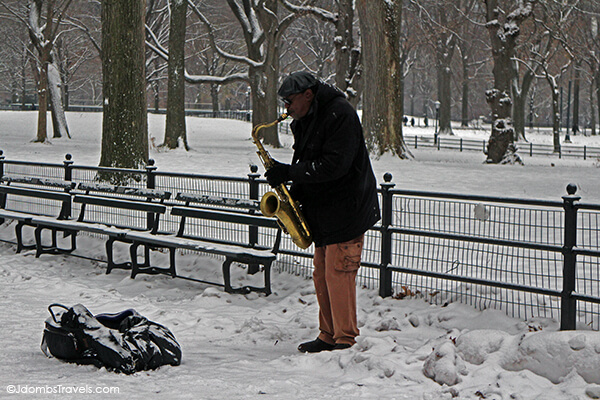 A sax player on the Central Park Mall

The Central Park Mall, the only formal walkway in the park, is usually teeming with skateboarders, rollerbladers, and street performers. On a snowy day in Central Park, it was eerily quiet and a lone saxophone player broke the silence with some Christmas tunes. You wouldn’t know it under all the snow, but those trees lining the Mall are one of the largest and last remaining stands of American Elm trees in North America. Perhaps this is why the Mall is the most filmed location in all of Central Park. 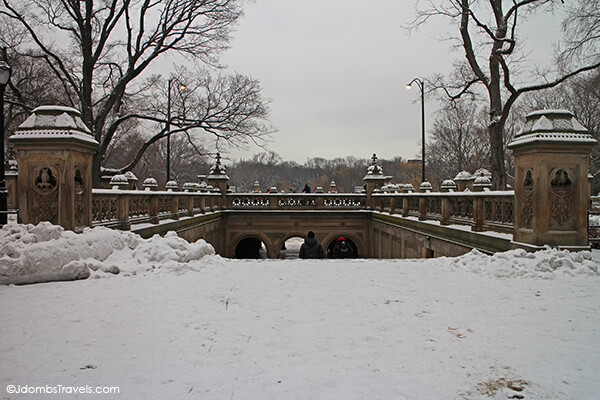 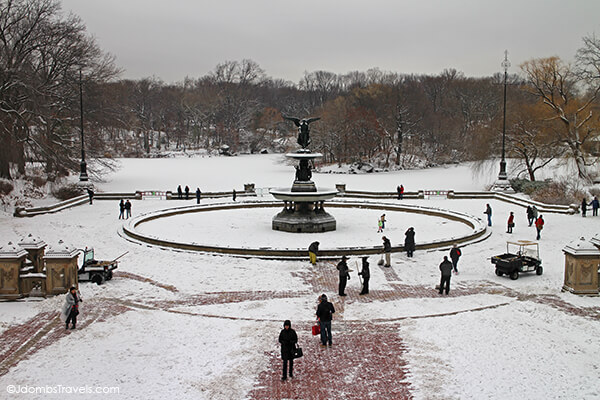 The Bethesda Fountain is the most popular meeting spot in Central Park, even on a snowy day!

The Mall runs from 66th Street to 72nd Street, ending at the Bethesda Terrace Arcade. It was here that in the olden days, the horse carriages of the wealthy would await their masters to finish their stroll along the Mall. A grand staircase, ornately carved with various birds, leads down to the Bethesda Fountain. The fountain is topped with the most recognizable icon in Central Park – the famous Angel of the Waters statue. Designed by Emma Stebbins in 1873, the statue celebrated the new Croton Aqueduct that both fed the fountain and supplied fresh water to a city that how long been plagued by infectious diseases from the unsafe water supply. The Bethesda Terrace, along with the lovely view of the Boathouse and lake have been the cinematic backdrop for holiday movie favorites like Home Alone 2: Lost in New York and suspenseful thrillers like Ransom. Though my favorite on screen moment at this beautiful spot is when Carrie and Big fall off the dock and into the lake in Sex and the City. Though on such a snowy day, I’d hardly even recognized it was a lake until I spotted the iconic Boathouse with the skyscrapers of the Upper East Side rising up behind it. The San Remo Apartments, with its twin towers, seen from Central Park

On this snowy day in Central Park, the Upper East Side wasn’t my destination. I continued along the snow covered (and a little bit icy) paths along the lake toward the Upper West Side’s most desirable address. The San Remo Apartments have epitomized Upper West Side luxury since their construction in 1929 and still today it remains amongst the most expensive locations in all of Manhattan. It’s no wonder many celebrities and business tycoons call this building home. 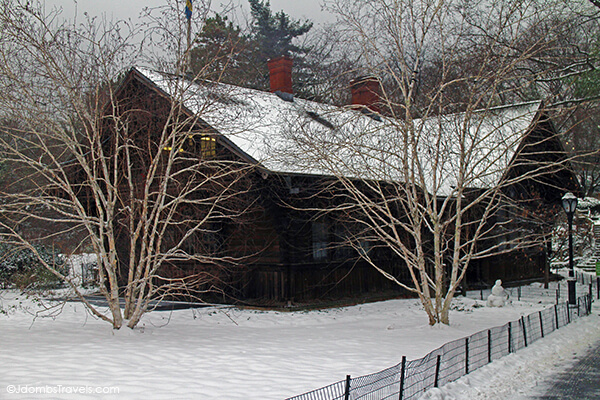 I headed just a little further north still, passing by the Swedish Cottage Marionette Theater. It got its name as the Swedish Cottage because it was built in Sweden in 1875 as a traditional schoolhouse. It was moved to Central Park in 1877 and has served a number of purposes, including as a headquarters for Civil Defense during WWII. Since 1947 it has delighted children with its marionette theater performances. 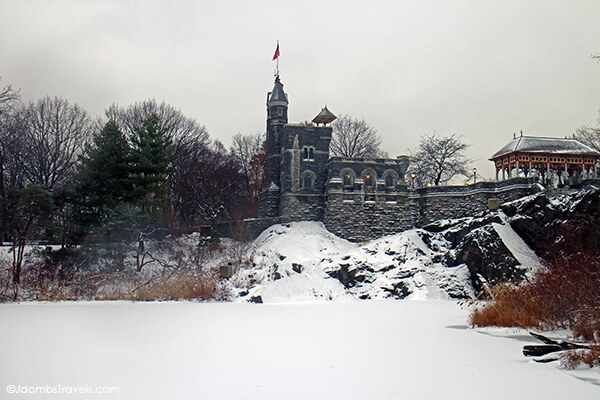 As the snow began to fall even faster, my last stop was at the Belvedere Castle. Designed in 1865, its purpose was really nothing more than to provide a beautiful backdrop. That it does, but since 1919 the Belvedere Castle has also served as the National Weather Service’s station to take measurements of wind speed and direction and rainfall (or on a day like this, snowfall). If you’re ever lost, just look for a light pole!

While some 63 miles of serpentine paths, it’s actually incredibly easy to get lost in Central Park (I didn’t, in case you were wondering). Even more so on a snowy day when you practically have Central Park to yourself, especially areas like The Ramble around the Boathouse. Jeff gave me an excellent tip – the light poles all have a number on them and the first two numbers indicate the street you’re at. Central Park is only a 1/2 mile across, so you’ll likely be able to find your way out and know exactly which block you’ll come out at.

No matter if you cover the equivalent of 20-some blocks like I did or if you just wander in as Central Park South, Central Park is not to be missed. There is plenty going on in the park and it’s always a nice escape from the hustle and bustle of Manhattan. Especially on the rare occasions that Central Park is under snow and a visit is like walking through scenes on a holiday card.

Bonjour from Corsica! 😍 If you’ve seen my St