You are here: Home / Europe / Belgium / In Bruges Bruges is known as the Venice of the North because of its picturesque canals. Once directly connected with the sea, gradual silting since around 1050 has caused the city to lose its direct access to the sea. The historic city center was added to UNESCO’s World Heritage List in 2000. The current city boundaries still coincide exactly with those of the medieval city center, and the spaces and structures remain largely unchanged since the 16th century, making Bruges a very idyllic and picturesque place to visit. There is so much history behind the buildings, that we decided to take a guided tour of the city to learn a little more. 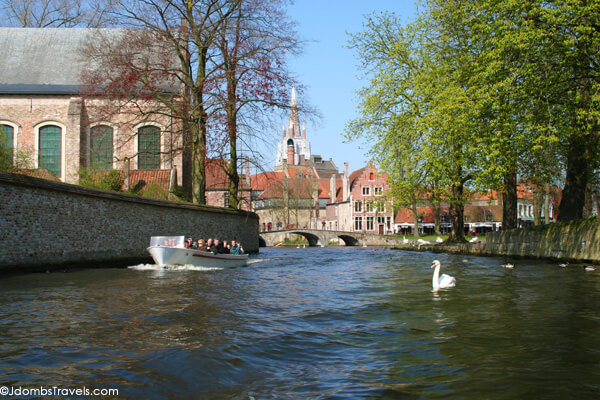 Entering the city gates, we first came to the Lake of Love with its many swans swimming about. The legend about the swans of Bruges is that in 1488 the people of Bruges had executed one of the town administrators belonging to the court of Maximilian of Austria. The town administrator’s, called Pieter Lanchals with the name meaning “long neck”, family coat of arms featured a white swan. Legend has it that Maximilian punished Bruges by obliging the population to keep swans on their lakes and canals until eternity. Hearing the legend, we were immediately drawn in… 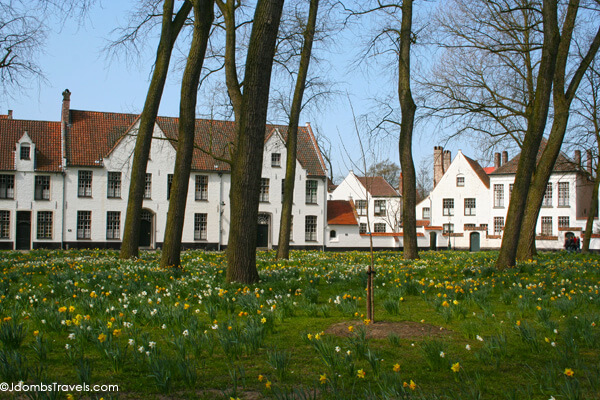 Continuing our walking tour with a knowledgeable guide, we came to the Princely Beguinage Ten Wijngaarde with its whitewashed house fronts, tranquil convent garden, and beguinage museum that was founded in 1245 by Joanna Countess of Constantinople. Today the nuns of the Order of Saint Benedict live at the site. Posing along the canal in front of St. John’s Hospital

In front of the Church of Our Lady stands the large complex of the medieval St. John’s hospital, one of the oldest still existing hospitals in Europe. It was a functioning hospital until 1978 and now serves as a museum. The Church of Our Lady, who brick spire reaches an astounding 122 meters, houses the Madonna and Child from 1504. It is one of only a few of Michelangelo’s works to ever leave Italy within his lifetime. The sculpture was originally meant for the Siena Cathedral in Italy but was purchased in Italy by two Brugean merchants and brothers, Jan and Alexander Mouscron, and donated to the Church of Our Lady in 1514. 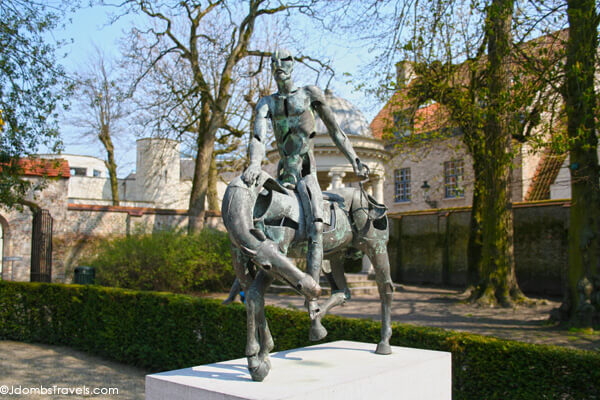 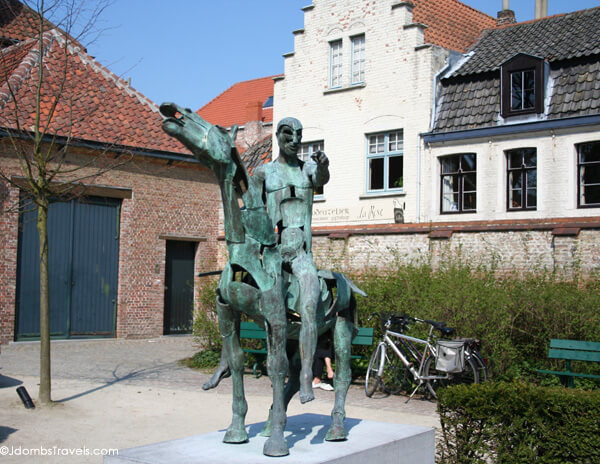 The Arendts Garden has modern sculpture representing the Four Horsemen of the Apocalypse, which are described in the Book of Revelations, the last book in the New Testament of the Bible. Though some interpretations vary, the four riders are seen as symbolizing Conquest, War,  Famine, and Death.

The Basilica of the Holy Blood was originally built in the 12th century as the chapel of the residence of the Count of Flanders. The basilica is comprised of an upper and lower chapel; the upper chapel houses a venerated relic of the Holy Blood allegedly collected by Joseph of Arimathea and brough from the Holy Land by Thierry of Alsace, Count of Flanders after the Second Crusade of 1147 – 1149. The lower chapel, The Chapel of  St. Basil, remains virtually unchanged with a 12-century representation of the baptism of Saint Basil. One of the most beautiful buildings of Bruges can be seen in Burg Square, the Gothic town hall from 1376. In the front facade are six Gothic windows. On the front side are also displayed the town weapons of the cities and villages that were under administrative rule from Bruges. 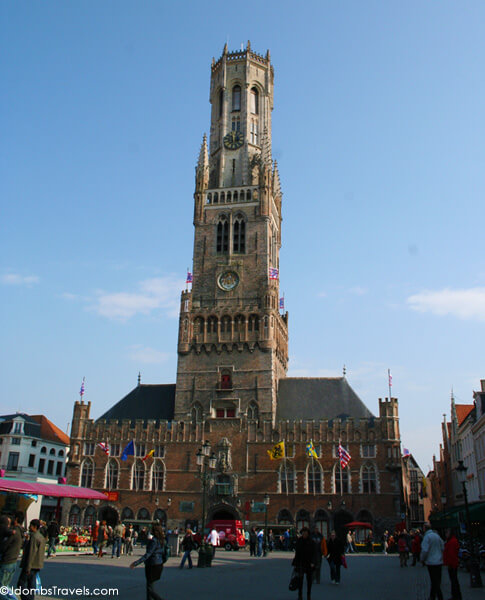 Bruges’ most famous landmark is its 13th-century belfy. It is 83 meters high and leans about a meter to the east. The city still employs a full-time carillonneur, who gives free concerts playing the 47 bells on a regular basis. You can even climb all 366 steps to the top to see the bells up close. Bruges’ canals were once navigate by ships, originally probably by the Vikings themselves. Nowadays the canals are exclusively used for tourist boats. 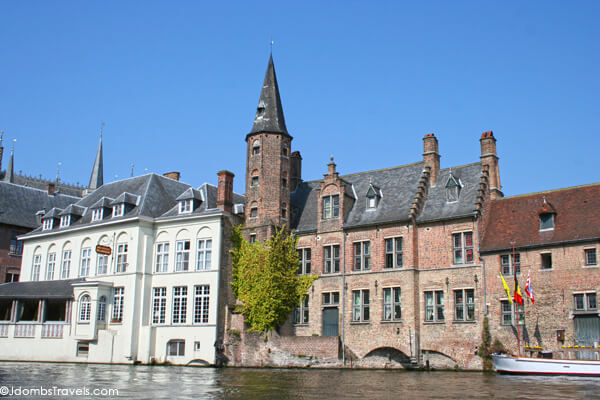 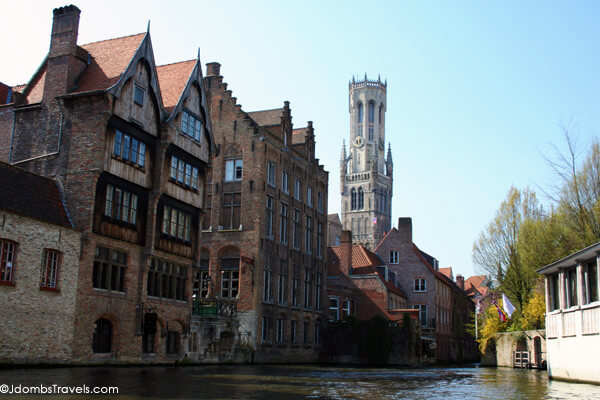 There are five families with the rights to organize tourist excursions by open boats on the canals and each family has four boats. The clippity-clop of horses’ hooves can be tempting to take a carriage ride through the nearly car-free city, but we say skip the carriage ride and take a canal tour instead. Finish off your visit to Bruges by visiting some of the city’s best chocolate shops like Chocolaterie Depla.

For movie filming locations from In Bruges, check out this guide from Sofie at Wonderful Wanderings.


BookingTips
Bruges is easy to visit on the Ghent and Bruges Day Trip from Brussels and costs $62 per adult and $31 for kids ages 4 – 12. Children under 3 are free.
Round trip transport from your hotel is included and there is free time in both Ghent and Bruges. Lunch and optional boat cruise in Bruges (approximately $8 per person) is not included.