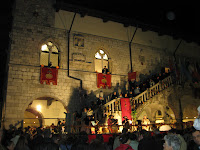 The Festa della Zucca is held every year in Venzone, Italy. The historical town center transforms into a Medieval town with fire eaters and dancing. The streets are lit by torches and candles, and are peopled by nobles, knights and ladies, innkeepers and tavern keepers, shopkeepers and merchants.The shops are decorated with pumpkins and gastronomic delights such as pumpkin pizza, pumpkin gnocchi, and pumpkin crostini can be found all throughout the town. 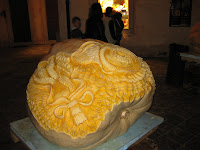 The origins of the Pumpkin Festival are legendary. The Noble of the village of Venzone had made available all his wealth and his own money to beautify and fortify the town. In short, their availability for the completion of restoration and renewal of the country ended and many workers were not rewarded. Among them, a master of Udine, who was called by Venzonesi, was hired to complete the copper dome of the Cathedral of Venzone with a golden ball. But he too was not paid for his work. He then replaced the ball on the golden dome of the cathedral with a pumpkin. The townspeople realized that they were tricked by the artist only on the day when the ball fell from its position on the dome and smashed to the ground. 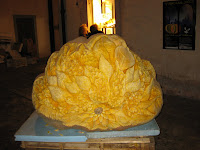 This is a popular festival, so prepare for a walk from where you can find a spot to park. We walked a little over a mile into the town. The main square had a stage set up where musicians and the fire eaters performed. We sampled the pumpkin pizza with pancetta and pumpkin crostini, both which were delicious! 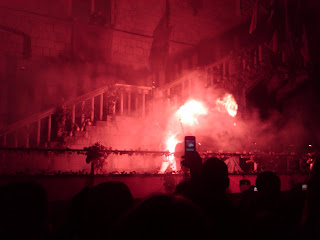