As I sipped the most expensive Aperol Spritz I’ve ever had in Italy at a restaurant just because of its stellar location on a terrace overlooking the magnificent Colosseum in the Monti District, I seriously wondered how the tourists surrounding me could force down the awful looking plates of pizza and pasta being delivered to them. I reminded myself that they were there for the same reason as me; basking in the golden glow of the Colosseum as the sun began to set while sipping wine on a terrace is the stuff movies are made of and a dream come true for any traveler to Rome. 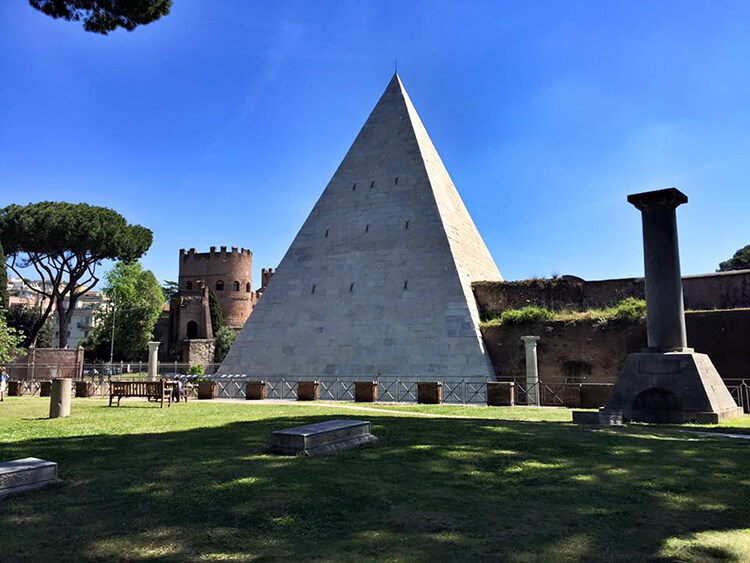 The Pyramid of Cestius is the oldest monument in Rome

But what they didn’t know is that authentic Roman cuisine can still be found just a short bus ride away in Rome’s Testaccio neighborhood. Sure, it’s not as pretty a neighborhood as Monti; but Testaccio is home to a monument even older than the Colosseum – the oldest in all of Rome, in fact – and is the birthplace of Roman cuisine.

Testaccio is where the foodies-in-the-know go.

In the name of research and my ongoing expertise in all things Italian, I needed to try the best of the best. Who better to help me discover the true Cucina Romana than a born and bred Roman? So, off I went with Eating Italy Food Tours for the Taste of Testaccio Tour food extravaganza.

I’m no stranger to fabulous food tours. They’re one of my favorite ways to discover urban places. As a food tour connoisseur, I knew to skip breakfast because I would be extremely well fed over the course of my 4-hour tour. And I definitely wasn’t disappointed.

Eating Italy’s Taste of Testaccio tour includes 12 – yes, TWELVE – different tastings. I’ll just tell you about a few of my favorites and as for the rest, you’ll just have to book a tour yourself to see all of the delicious things that await in the Testaccio neighborhood. 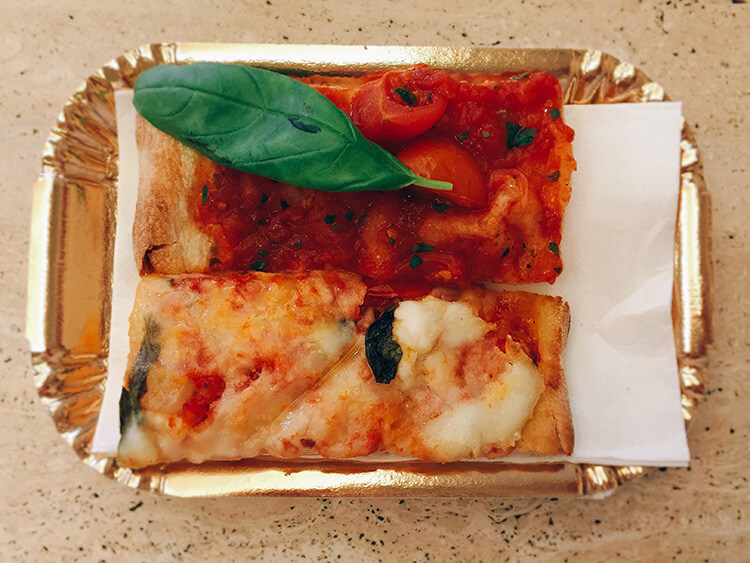 Two different kinds of pizza by the slice at Volpetti Piu

Pizza is one of my favorite Italian foods. Living in Italy for the last seven years has seriously ruined me and no other pizza will ever stack up. It should be no surprise then that I was thrilled to hear our very first stop would be at one of the number three rated pizza restaurant out of more than 1500 in all of Rome.

Pizza al taglio means pizza by the slice and Volpetti Più serves it up cafeteria-style with the majority of customers taking it away for lunch. And though lunch was officially at least two hours away, a steady stream of Romans flowed through the shop.

Pizza was invented in Naples, Italy to the south of Rome about 200 years ago and the very first pizza was actually a white pizza. Tomatoes, if you can believe it, are not native to Italy and once upon a time Italians even believed they were poisonous. It was Christopher Columbus that brought tomatoes back to Italy with him from the New World and the Spaniards that figured out what the heck to even do with them.

It wasn’t until the late 18th century that Italians began turning them in to a delicious sauce to put atop their pasta and eventually their pizza, with Naples’ invention of pizza Margherita in 1889 to honor the Italian queen with a pizza that represented the tricolori of the Italian flag. 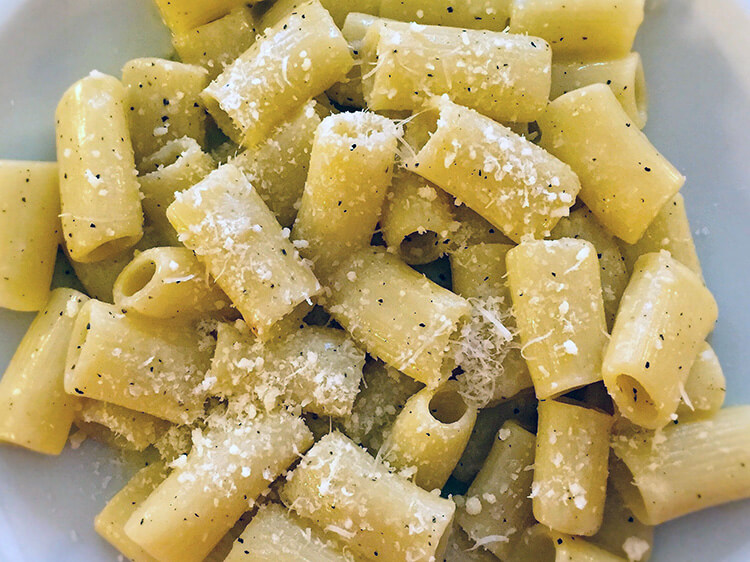 Fettuccine alfredo is not a Roman dish. In fact, it’s an American adaption of another Roman pasta that has been brought back to Italy. I’ve never actually seen fettuccine alfredo on a menu, but if you do see it you should leave the restaurant immediately…if not sooner.

A true Roman dish that is similar in concept to fettuccine alfredo is cacio e pepe. Along with pasta carbonara, cacio e pepe is among the most traditional Roman dishes you can find. 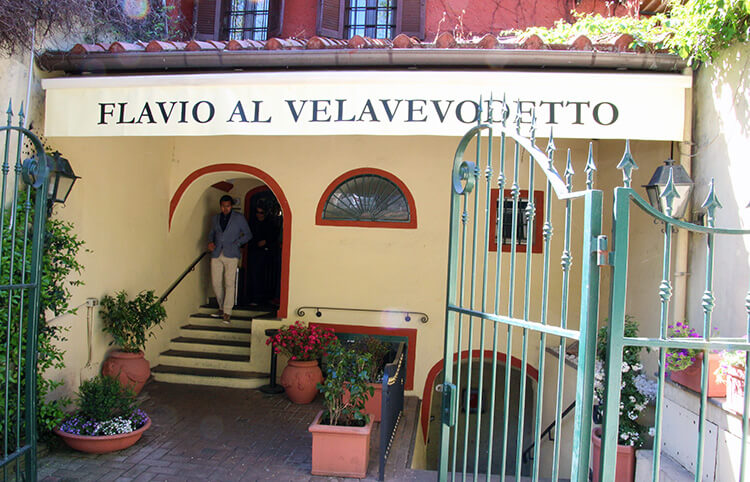 Literally translating to cheese and pepper, cacio e pepe is a simple Roman dish made with Pecorino Romano cheese, black pepper and pasta. And one of the best places to sample it is at Flavio al Velavevodetto, an award-winning restaurant built in to the side of Monte Testaccio.

We actually tried three different Roman pastas at Flavio al Velavevodetto and all were delicious, though it was the cacio e pepe that I filled with my plate with seconds with. This stall at the Testaccio Market sells fresh mozzarella bufala

I couldn’t pick just one favorite of the three tastings we had at Testaccio Market. In fact, I could have put together a full multi-course meal from the covered stalls in the new market hall alone.

When I say new, that’s new by Roman standards. The Testaccio Market opened just over three years ago now in a bright, modern building. But don’t let the surrounding graffiti by famous street artists and the sleek look of the market square fool you; beneath that covered hall are some of most delicious things you’ll find in Rome.

From vendors selling fruits and vegetables to Roman street food, Testaccio Market is more than a place the locals come to get their groceries. It’s a place to eat and socialize. We assembled our own bruschetta at the Testaccio Market

Our Eating Italy Food Tour made its way to several of the stalls, picking up fresh tomatoes that the proprietor kindly chopped up in a bowl for us and then some freshly baked bread. These were used for some DIY bruschetta.

And though Italy is certainly known for its wine, we couldn’t leave the Testaccio Market without sampling some Italian craft beer and street food. 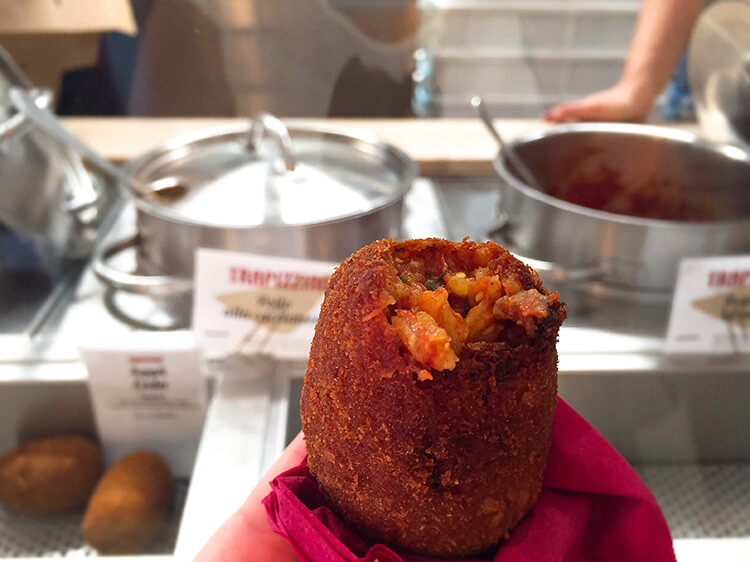 Suppli are Roman fried rice balls stuffed with mozzarella, sauce and other ingredients

I’m no stranger to arancini, but my Eating Italy Food Tour introduced me to arancini’s Roman cousin – the suppli. Like arancini, it’s a deep fried rice stuffed with delicious fillings though the suppli is more oval shaped and can easily be broken in half. And as you break it in half, the ooey-gooey melted mozzarella stretches between the two pieces.

Though suppli can be found in many pizza shops around Rome, some of the best are sold at Trapizzino in Testaccio. Grab a few extra for snacks later. I did for my train ride back home to Venice! Tiramisu in a chocolate cup

Though tiramisu was actually invented in the Veneto region, it’s a famous dessert that can be found all over Italy in different variations these days.

Pasticceria Barberini, which has been delighting Romans with their coffee and pastries since 1934, serves up their tiramisu in a chocolate cup. And it’s just oh-so-lightly dusted on top with just the right amount of cocoa powder. First world problems, I know, but there’s nothing worse than taking that first bite of a tiramisu coated in cocoa powder. These from Barberini were just right. I can’t not mention gelato! As a seven year resident of Italy, I already know how to spot the real gelato from the stuff made from a mix and being pedaled as the real deal. But our Eating Italy guide had invaluable tips for the rest of our group on what to look for.

The easiest way to spot artisan gelato is to look at the color. Since gelato is made with natural ingredients, the colors should be muted and come from mashing up a banana or crushing a pistachio. Pistachios are more gray in color; pistachios are not bright green and your pistachio gelato shouldn’t be either. You’ll also want to steer clear of those gelaterias with what I refer to as poofy gelato, or the stuff piled up way higher than their little metals bins. That’s a sure sign that it was made with a mix and has a lot of air in it.

Giolitti is the real deal and one of the best in Rome. I was super excited to spot an “adult” gelato called zabaione, which is made with an Italian spirit by the same name. Zabaione is a creamy liqueur made with sweet Marsala wine, egg yolks and sugar and it is delicious. A scoop of zabaione gelato was the sweetest way to end my eating and walking tour of Rome’s Testaccio neighborhood.

Where To Stay in RomeBooking
Some of our favorite hotels in Rome:
The Taste of Testaccio Tour Eating Italy Food Tour is available Monday – Saturday at 9:45am, 10:30am, 11:15am and 12pm. It runs 4 hours in length.
Book Now

My tour was provided by Eating Italy in order to bring you this story. However, Luxe Adventure Traveler maintains full editorial control of the content published on this site. As always, all thoughts, opinions, and enthusiasm for travel are entirely our own. This article contains affiliate links. When you book on Booking.com or Eating Italy Food Tours or shop on Amazon