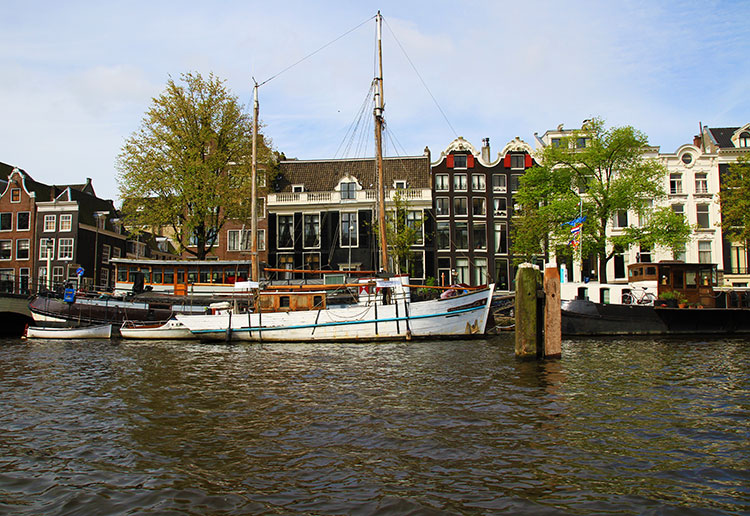 Amsterdam was founded as a fishing village in the 12th century

Amsterdam got its name from the Amstel River.

As we set out from the Intercontinental Amstel Amsterdam, which is one of the oldest buildings in Amsterdam and located on the Amstel River, the captain explained that Amsterdam was originally founded in the 12th century as a fishing village. The village derived its name from the Amstel River and the dam that was built in 1220 to avoid the floods from the ZuiderZee (South Sea) entering the inlands. Over time Amstellodamus evolved into Amsterdam. 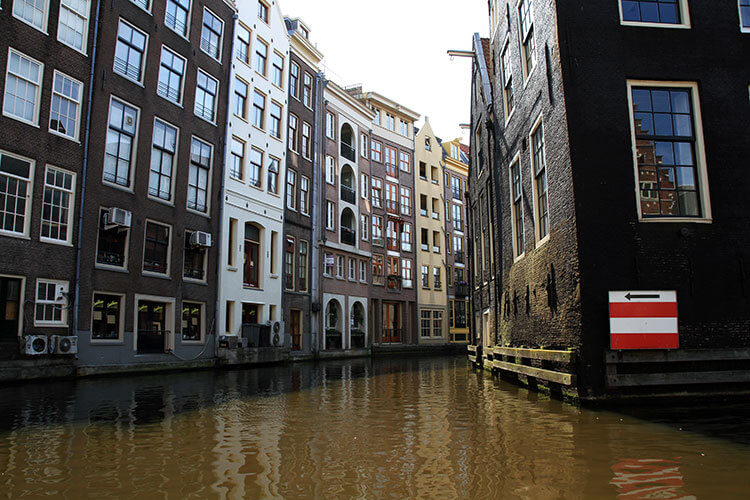 The canals stretch for about 60 miles

There are 165 Amsterdam canals that combine for a length of over 100 kilometers (about 60 miles). The Canal Ring became part of the UNESCO World Heritage list in 2010. 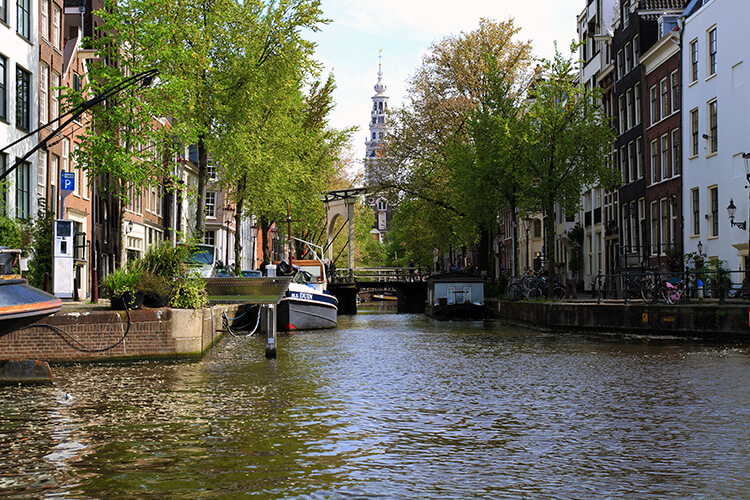 Monet painted this scene many times on his visits to Amsterdam

Monet painted the South Church during a visit to The Netherlands.

The Zuiderkerk, or South Church, was the first church built in the city for Protestant services and was built between 1603 and 1611. French impressionist Claude Monet painted the church 13 times during his visit to the Netherlands and the captain stopped for us to admire the exact angle as the Monet painting with the Groenburgwal canal leading up to it. 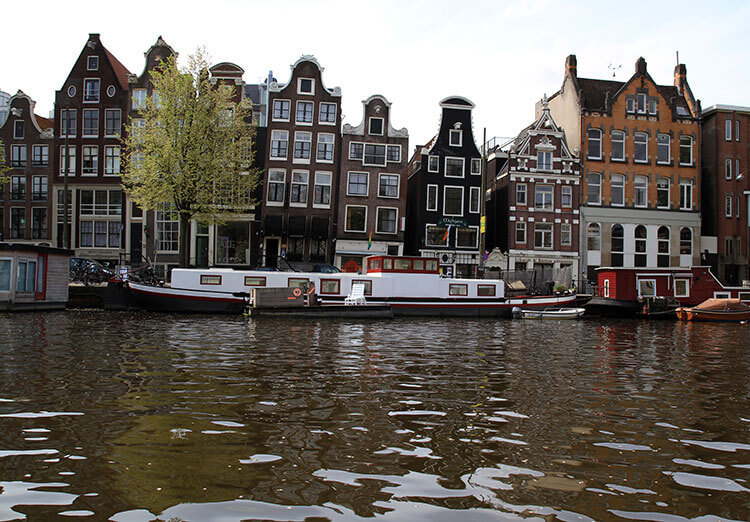 The houses all sank and became crooked, earning them the name Dancing Houses

The houses were built for the wealthy bankers and merchants and did double-duty as both houses and work spaces. The soil was so swampy that they had to built on stilts and that caused them to wobble and sink into the river, so now they are each a little off kilter! 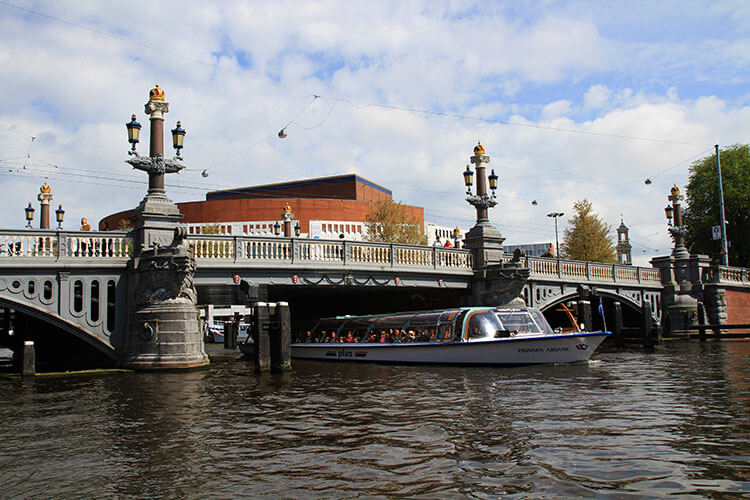 The Blue Bridge is just one of Amsterdam’s 1200 bridges

Amsterdam has more bridges than Venice.

It’s almost hard for us to believe as we’ve trekked over Venice’s bridges countless times during our time living outside the Italian city, and it sure feels like there are thousands. There are only in fact 409 bridges connecting Venice’s canals. Amsterdam actually has 1281 bridges. That’s three times as many as Venice! 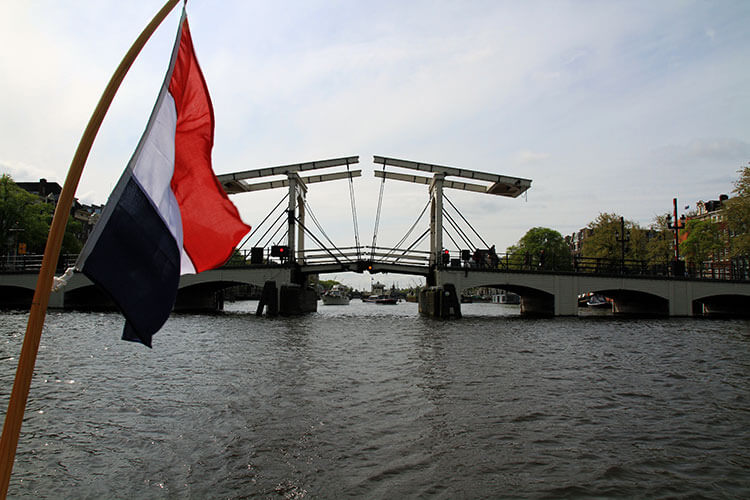 Magere Brug is the most famous bridge.

Of the 1281 bridges in Amsterdam, the Magere Brug (also known as the Skinny Bridge) is the most famous. Approximately every 20 minutes, the Dutch draw bridge opens to let boats pass through. 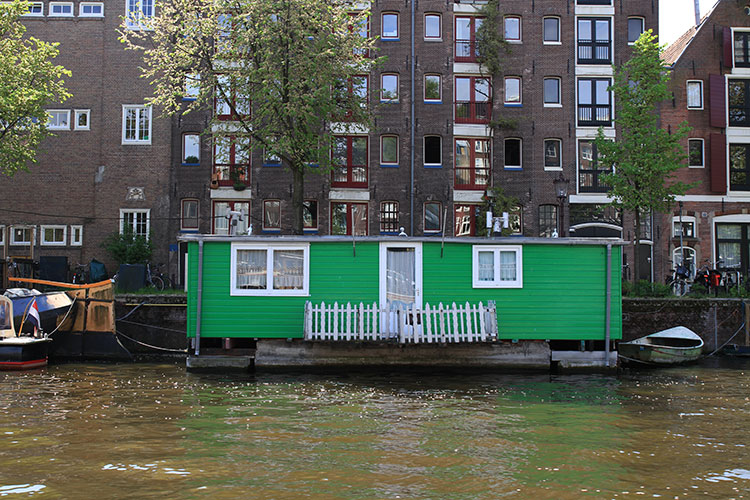 Amsterdam has the equivalent of a HOA for houseboats

There are 2500 houseboats in Amsterdam.

2500 houseboats line Amsterdam canals and many have been afloat for more than a century. There are different types of houseboats and the concrete kind are the most desirable as they don’t need to be taken to the shipyard for repairs. Amsterdam has laws about the houseboats and the wooden ones need to be repainted every three years. Most are residential, but visitors can find houseboat hotels, rentals and even a Houseboat Museum if you just want to see what it’s like on one. 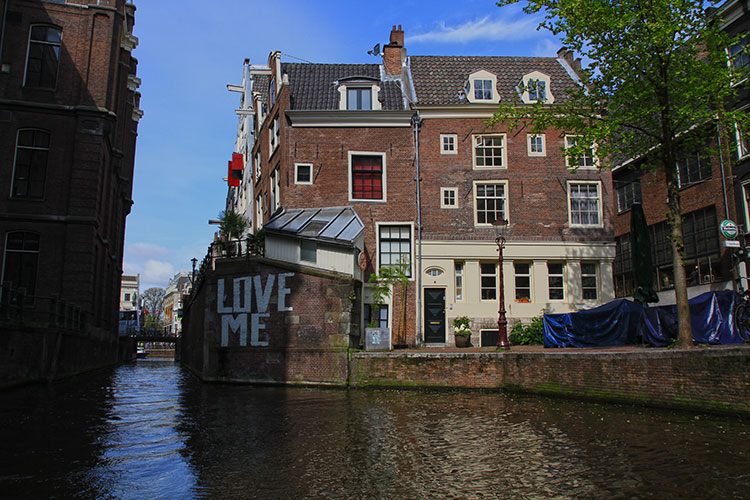 The first wall of Amsterdam

Amsterdam was once surrounded by defensive walls.

Built in the Middle Ages, the walls of Amsterdam were meant to defend the city against an attack. The walls were torn down in the 19th century, but remains can be seen when cruising the canals.

Powered by GetYourGuide. Become a partner.

or GetYourGuide through our affiliate sites, we earn a small commission at no additional cost to you.