On the southern end of Santorini sits an archeological excavation site of the ancient Minoan city of Akrotiri. Dubbed the Greek Pompeii, it too was destroyed and preserved all at once by a volcanic eruption. Only ancient Akrotiri is much, much older than Pompeii. Ash and pumice from the eruption of Mount Vesuvius buried and destroyed Pompeii in 79AD. Ancient Akrotiri was settled sometime between 5000 – 3000 BC and was a thriving agricultural center where grains and olive oil were cultivated by around 2000 BC. In one of the largest volcanic events ever recorded on Earth, ancient Akrotiri was destroyed and the island collapsed creating the four mile wide caldera sometime around 1450 BC. 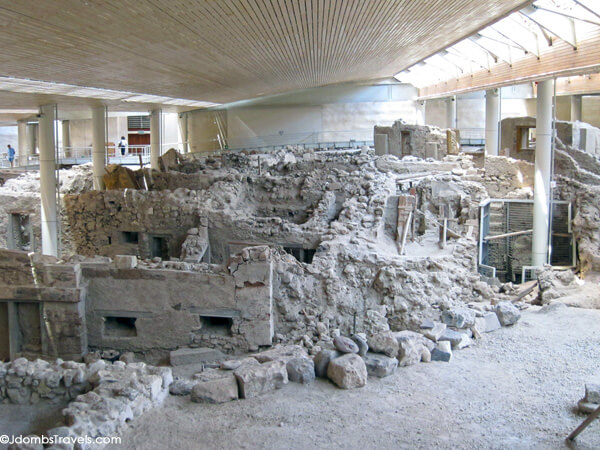 After the massive eruption of 1450 BC, Santorini remained uninhabited for around two centuries. It wasn’t until 1860 when workers quarrying volcanic ask for use in the Suez Canal discovered Akrotiri. Excavations didn’t begin until over 100 years later in 1967, under the direction of Professor Spyridon Marinatos of the University of Athens. Sadly, excavations had to halt in 2005 when a roof collapse killed a British tourist at the archaeological site. After being closed for 7 years, excavations resumed once again and the site was re-opened with a new steel and wood covering in April 2012.

So far only about 40 buildings have been uncovered and are estimated to account for just 1/30 of the site. Visitors to the site stroll down Main Street and we were given a rare glimpse into Minoan life. For an ancient city from 5000 BC, surely the oldest we’ve ever set foot it, we were surprised at how advanced the Minoans were. Plaques in four languages, including English, tell about the buildings, some up to three-stories tall, the pottery, and even the sewer system which surely must be the oldest in the world. 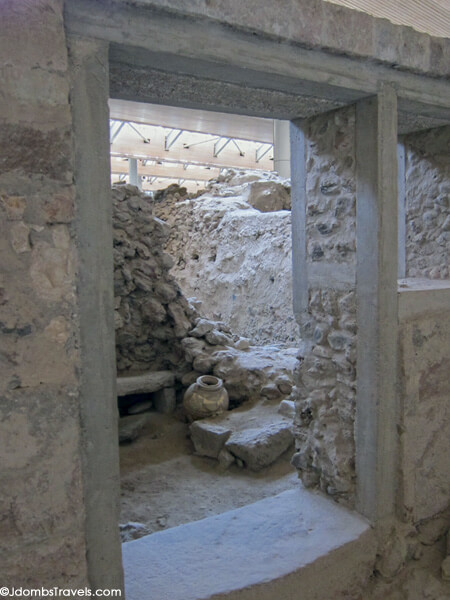 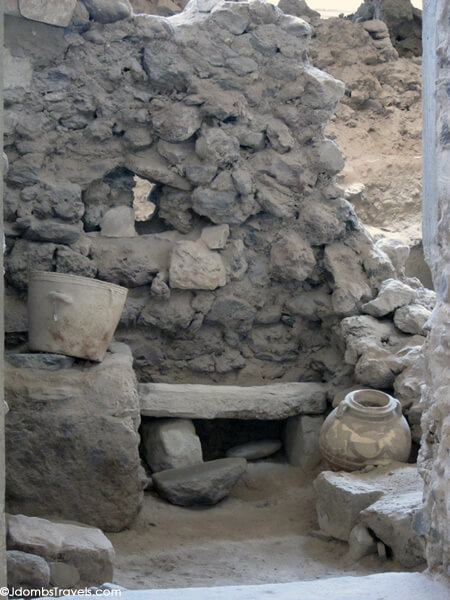 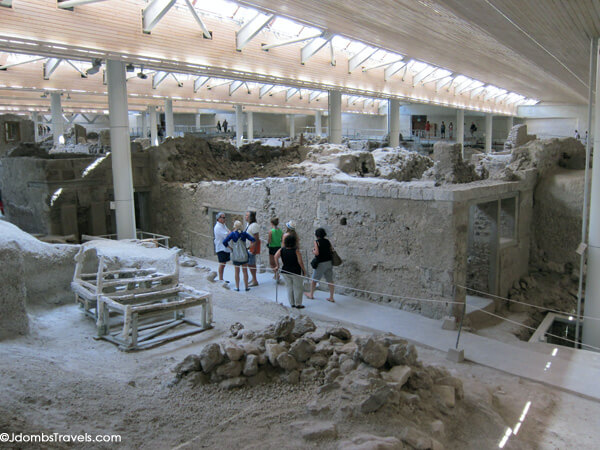 Pots (pithoi) were incredibly well preserved in the ash and many were found with traces of olive oil, onion, and even fish still inside indicating that these buildings were stores. The complex is called Mill House Square and we wandered between the almost fully excavated buildings and poked our heads inside to see the beautiful earthen jars left behind. What we guessed were tables lay off to the side, pumice clinging to them from the eruption.

The wealthy households were extensively decorated with frescoes and those too were incredibly preserved in the eruption. Most of the frescoes now reside in the National Archaeological Museum in Athens and some can be seen at the Museum of Prehistoric Thira on Santorini. Pictures on the placards show which frescoes were found in the excavated buildings. Our favorite area of the excavation site was the Pithoi Storeroom. It was the first building brought to light in the excavation by Professor Spyridon Marinatos and full of large storage jars. It was determined that the structure was a three-story building and the presence of a preserved loom suggests that weaving took place there.

One thing that was never found at Akrotiri, unlike Pompeii, is human remains. It is believed that the Minoan residents had ample time to abandon the city before the volcanic explosion. Though it is said that the explosion was so powerful that not only were the Minoans on Santorini lost, but that the explosion also wiped out settlements on the coast of Crete, sent tidal waves washing over Egypt, and that the destruction was the basis for Plato’s story of the lost city of Atlantis. I don’t know if it is the lost city of Atlantis, but I do not it is not to be missed on a visit to Santorini!