You are here: Home / Wine Wednesday / The Art of Pairing Food and Wine at Cafe Kandahar

I recently ate an 11-course meal. Yes, you read that right – ELEVEN courses. An 11-course wine pairing meal, at that. But when a James Beard multi-time semi-finalist is personally cooking for you and teams up with a sommelier to pair perfectly matched wines that accentuate the food, you eat every last bite. I definitely left Cafe Kandahar feeling satisfied, and surprisingly not like the button on my pants was about to pop, after having one of the best meals of my life.

Cafe Kandahar at Kandahar Lodge is the creation of Executive Chef and owner Andy Blanton. Distinguished as Montana’s finest dining restaurant, the restaurant has the accolades such as “The Wine Spectator Award of Excellence” (since 1998) and the “Wine Enthusiasts Award of Unique Distinction” (since 2004) to back up that distinction.

There is a 5- or 7-course Chef’s Tasting Menu on offer at Cafe Kandahar. Serious foodies might want to take it a step further and book the Chef’s Table, where Chef Andy Blanton will personally develop your meal and prepare it before your eyes in the show-style kitchen. 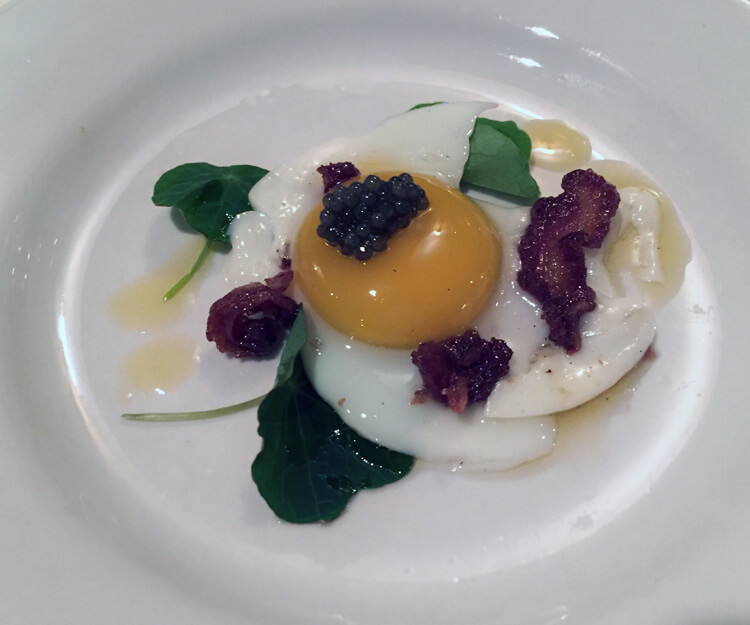 From the very first plate, a quail egg topped with duck prosciutto and Yellowstone caviar and paired with a glass of Champagne, I knew I was in for a real treat. Plate after plate of heavenly bites arrived, each accompanied by a new glass of wine from Cafe Kandahar’s extensive wine cellar. But I’m not going to tell you about each dish; I’ll just show you! 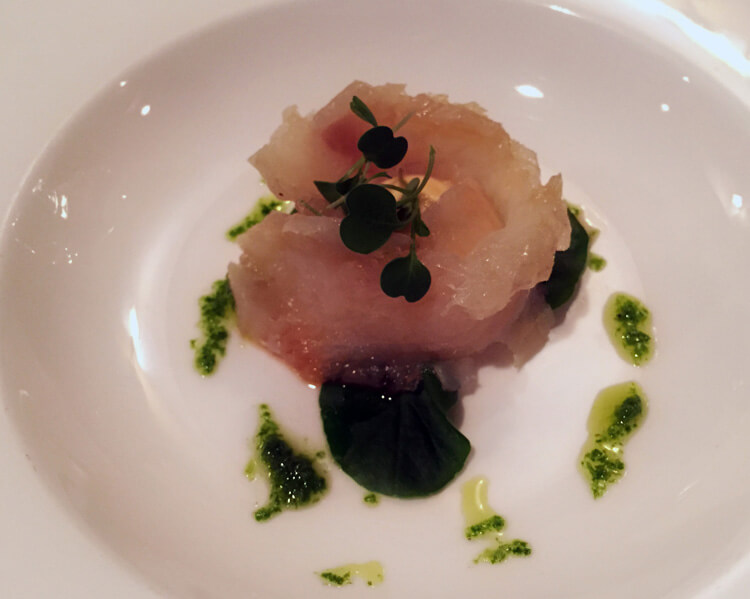 Okay, I know I said I would just show you but I do have to mention this particular plate. Of all the dishes listed on the menu, it was the one I scrunched my nose up at reading it. And it turned out to be favorite bite of the entire meal. Holy smokes, was this halibut lox flavorful! 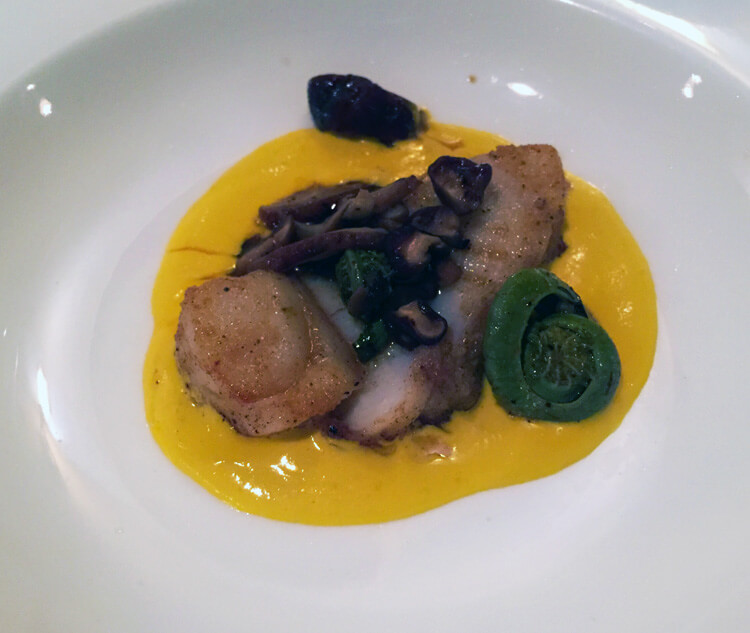 Sable fish with lemongrass, saffron and fiddleheads paired with a 2014 Saint-Veran from France 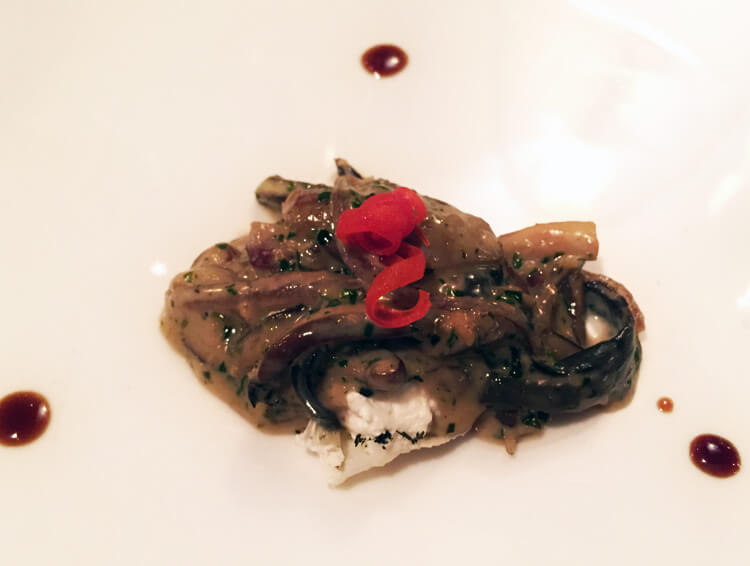 This one might not look like much, but the forest mushrooms with Madeira cream and Montana Chevre cheese were divine. It was paired with a 2013 Chardonnay from California. 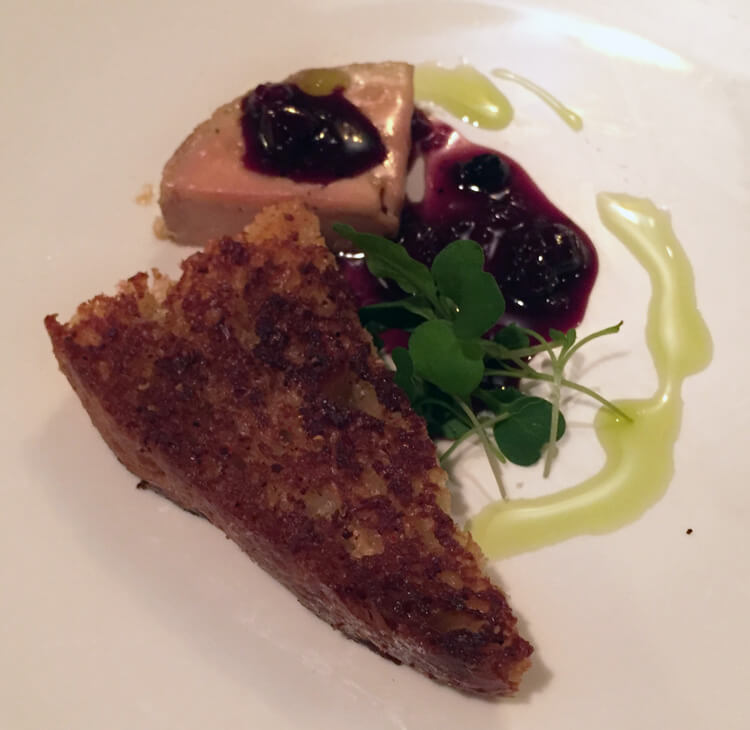 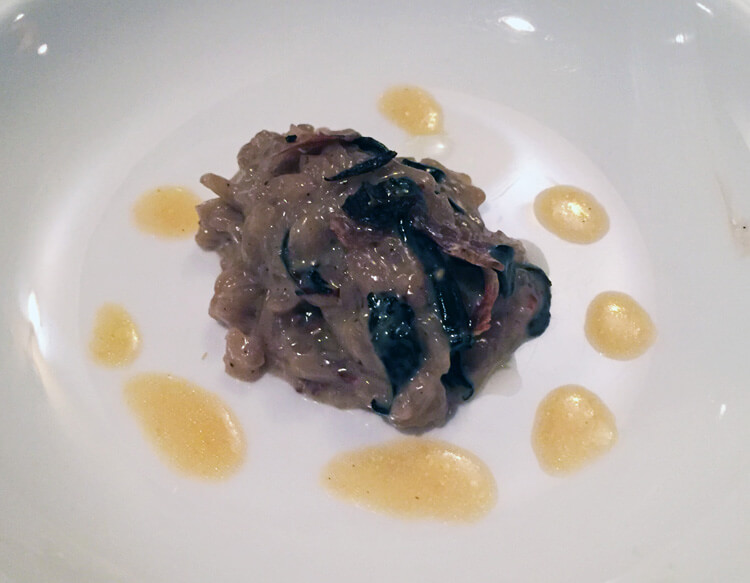 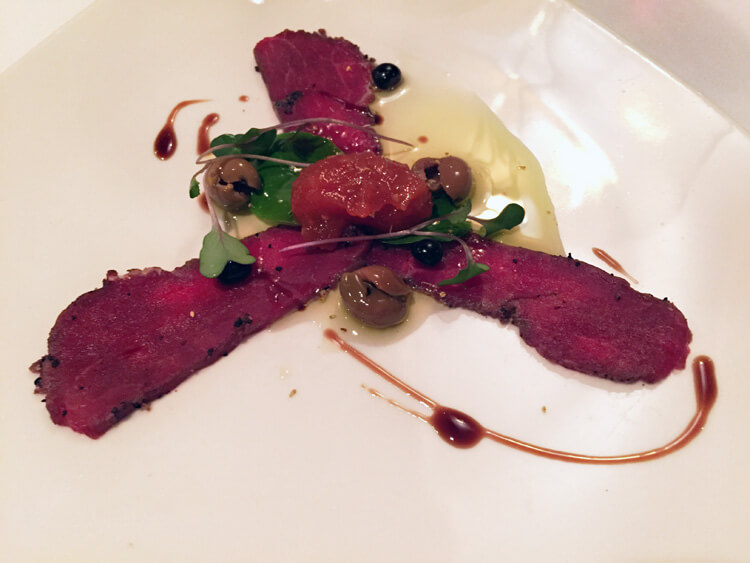 This one I was delighted to see on the menu. Yak are native to Tibet, but Kalispell (practically down the road from Whitefish) is home to the Spring Brook Tibetan Yak Ranch and I actually had yak two nights in a row – first as a yak burger at Hop’s Downtown Grill in Kalispell and then as carpaccio at Cafe Kandahar. I know what I’m eating if we ever go to Tibet, because yak are delicious and honestly taste a lot like a very lean beef (yak has just around 5% fat). 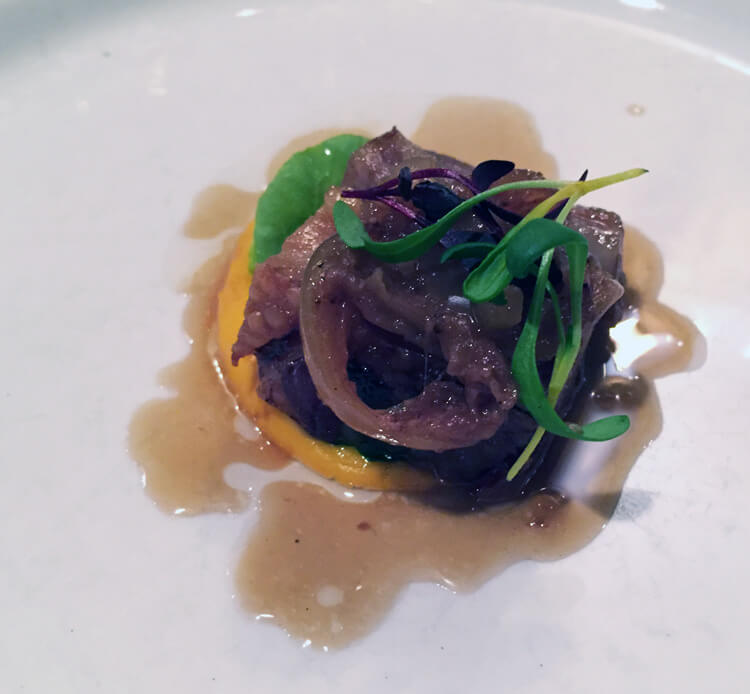 Pork belly confit with candied ginger and maple bourbon bacon…Oh. My. Gawd! Paired with a 2013 Vin Gris from California. 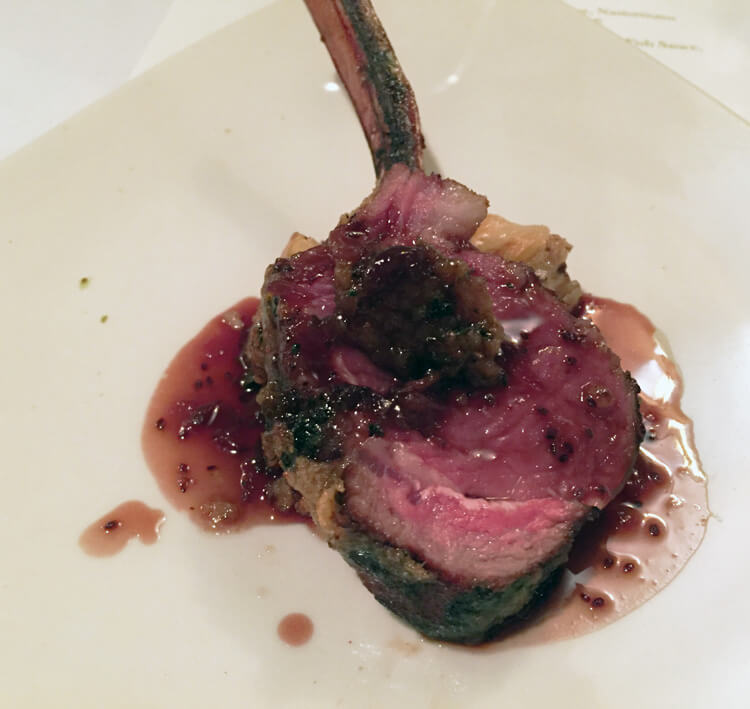 About halfway through our epic meal, another party arrived and was seated nearby. Curiosity killed the cat, and it wasn’t long after watching a couple of courses arrive at the table that they ordered “whatever we were having”. Good choice, fellow diners, good choice. 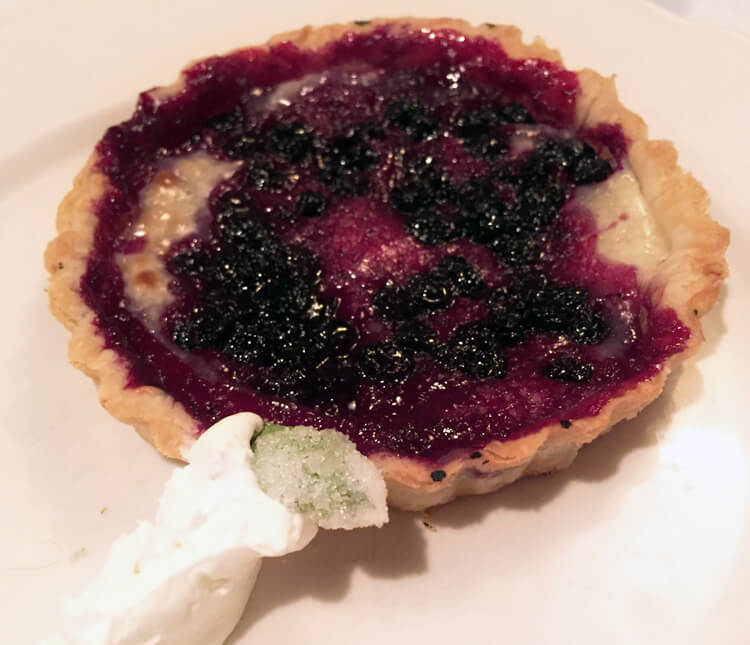 When in Montana! A huckleberry tart. 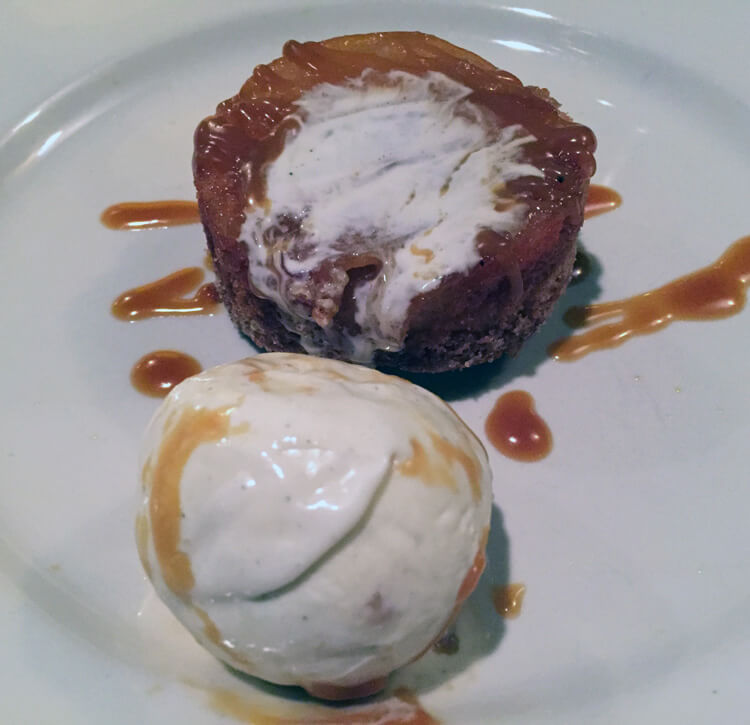 When you’re having an 11-course meal, you won’t simply get one dessert. No, that would be a disgrace. You get three desserts, actually as the twelfth, thirteenth and fourteenth courses. Somehow I managed to miss photographing the creme brulee and plate of chocolate dessert samplers. A late harvest Malbec from Mendoza, Argentina paired nicely with all of the desserts.

Don’t judge. I left nothing on a single plate but the garnishes. In my defense, every single course was beyond delicious and I was famished from a full day of learning to snowboard at Whitefish Mountain Resort. I also had a snowshoe hike in Glacier National Park and fat biking the trails around Whitefish planned for the next day, so I knew I’d work this meal off. That’s how they do it in Whitefish!

BookingWhere To Stay
Cafe Kandahar is open for the summer and winter season. Their seasons run from mid-December through the end of March and mid-June through the end of September. Be sure to make a reservation, especially if you plan to have the Chef’s Tasting Menu.
Cafe Kandahar is located inside the Kandahar Lodge. Not only are they are ski-in and ski-out boutique hotel, it was nice to be able to stumble just up the stairs to my room after 11 glasses of wine.

My trip was provided by Glacier Country Montana in order to bring you this story. However, Luxe Adventure Traveler maintains full editorial control of the content published on this site. As always, all thoughts, opinions, and enthusiasm for travel are entirely our own.