You are here: Home / Europe / Carpigiani Gelato University: An Education in the Art of Gelato

Forget Underwater Basket-weaving 101. There’s a new fun class in town and you even get to eat your homework! The Carpigiani Gelato University is an entire school dedicated to the art and traditional production of gelato. And I’m now a proud graduate! No, I’m not giving up traveling the world to open up my own gelato shop in Prata, but I am now schooled on all things gelato.

So what is gelato anyway?

Gelato is usually translated to ice cream in English, but like most Italian to English translations, that is a very loose translation of the word. Gelato and ice cream are very different as I learned at Gelato University. Gelato has less fat than ice cream and is even nutritional!

In fact, water – not milk or cream – is the key ingredient in gelato. Fruit gelato, actually called sorbet, contains no milk or cream at all. The simple banana sorbet we made as our very first attempt at gelato had a very short ingredient list:

My day at Gelato University began with a lesson by Gelato Maestro Luciano Ferrari in the gelato lab. He first explained how to determine the quality of gelato. It should have gusto, meaning it be taste intense, natural, and fresh. The color should be a natural color. For example, banana should be a grayish color, not bright yellow. And pistachio should be a dull green-gray color, not bright green. Finally, it should be dense yet creamy.

Artisan gelato is produced fresh daily because without preservatives, it is only good for no more than 48 hours.

After reviewing techniques and the base recipe for both gelato and sorbet, we actually made gelato. And more importantly, we ate gelato! After all, we had to taste it to make sure it met Maestro Ferrari’s quality standards (but you sure didn’t have to twist my arm).

After class and gelato making, we were treated to a guided tour of the Carpigiano Gelato Museum by its curator Luciana Polliotti, which officially opens on September 27, 2012. The museum features an interactive tour through the evolution of gelato, the history of production technology, and the places and means of enjoying gelato. Multimedia presentations on iPads accompany more than 20 original machines and tools from the gelato trade.

After a lunch in the university cafeteria, we were back in the lab where Maestro Ferrari and his best students and staff were putting the finishing touches on a cornucopia (literally a giant cone made into the shape of a cornucopia) filled with various fruit sorbets. After snapping some pictures, our group was anxious to sample gelato made by the experts themselves!

In total I’m not sure how much gelato I consumed over the course of the day. But my favorites were the Punch-a-la-Romaine (a recipe of peach and Prosecco created by Maestro Ferrari himself), Barbera wine sorbet, hazelnut and rosemary, and the chocolate with orange sauce.

Thank you to Carpigiani Gelato University for hosting me! All opinions and decisions to eat gelato until my stomach hurt are my own. 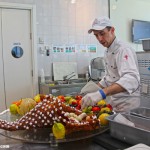 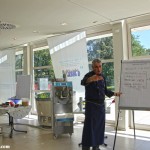 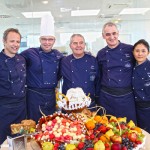 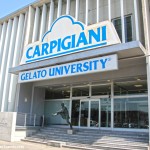 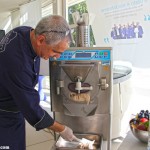 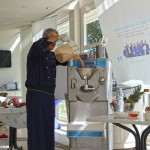 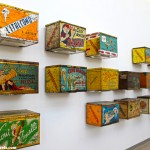 Vintage crates cones were packaged in 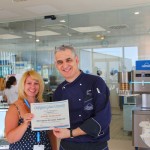 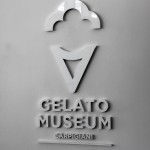 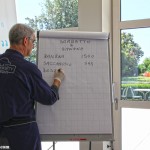 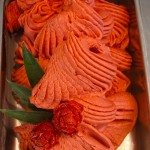 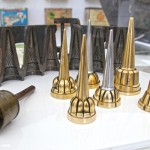 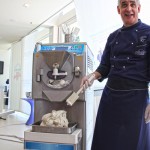 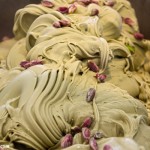