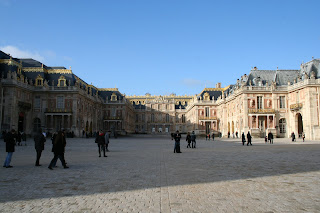 Originally a small royal hunting lodge, this structure became the core of the new palace, or Château de Versailles. The court of Versailles was the center of political power in France from 1682, when Louis XIV moved from Paris, until the royal family was forced to return to the capital in October 1789 after the beginning of the French Revolution. Versailles is famous not only as a building, but as a symbol of the system of absolute monarchy of the Ancien Régime.
A visit to the chateau begins with the Grand Apartments, which are known as the grand apartment du roi and the grand apartment de la reine (the private apartments of the king and queen respectively). These are richly decorated with colored marbles, stone and wood carvings, murals, velvet, silver and gilded furniture. Beginning with the Salon d’Hercule, each room is dedicated to an Olympian deity. 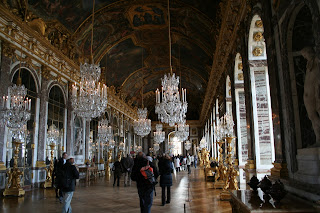 The Galerie des Glaces (Hall of Mirrors) connects the apartment of the king with the apartment of the queen and is where the 1919 Treaty of Versailles was ratified, ending World War I. Here seventeen mirror-clad arches that reflect the seventeen arched windows that overlook the gardens. Each arch contains twenty-one mirrors with a total complement of 357 used in the decoration of the Galerie des Glaces.

Not to be missed, even on a crisp winter day, are the Gardens of Versailles. In addition to the meticulous manicured lawns, parterres of flowers, and sculptures are the fountains, which are located throughout the garden. Dating from the time of Louis XIV and still using much of the same network of hydraulics as was used during the Ancien Régime, the fountains contribute to making the gardens of Versailles unique. 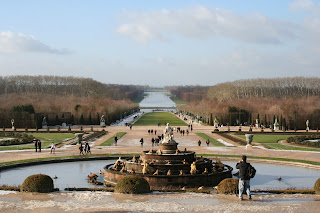 The Bassin de Latone, constructed between 1668–1670, depicts an episode from Ovid’s Metamorphoses. Latona and her children, Apollo and Diana, being tormented with mud slung by Lycian peasants, who refused to let her and her children drink from their pond, appealed to Zeus who responded by turning the Lycians into frogs.

With a length of 1,500 meters and a width of 62 meters, the Grand Canal, which was built between 1668 and 1671, was the setting for Louis XIV’s many boating parties. On a clear, crisp day, it’s the perfect place to purchase a delicious topped baked potato from a hot potato vendor and enjoy the picturesque gardens and glistening golden chateau. 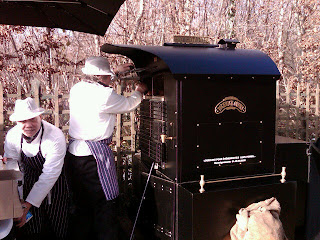 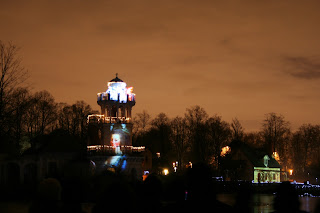 We were lucky to plan our visit with the Les Feeries de la  Reine at Marie-Antoinette’s Estate. The Queen gathered her favorites and staged refined, elegant fêtes where courtiers tried to seduce her with fireworks, trying to outdo each other’s wittiness and inventiveness. Fireworks, water effects and characters made of light glitter on the pond between the Dairy and the Mill, and illuminate the Queen’s splendid houses. It was the perfect end to a perfect day in Versailles! 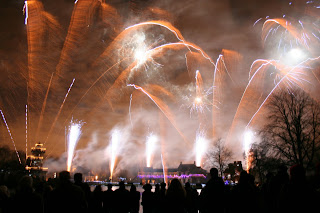