You are here: Home / Europe / Switzerland / Guide to Christmas in Zürich 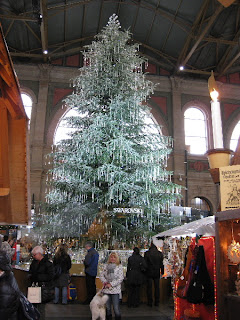 Zürich’s Christmas atmosphere is simply captivating with snow-capped Alps framing Lake Zürich and a plethora of holiday lights and Christmas trees in every square! 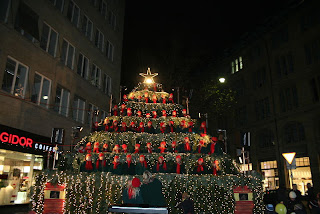 Located behind RailCity, the Live On Ice skating rink is set up against the backdrop of the Swiss National Museum. Hundreds of Christmas trees, a fondue tent, mulled wine and a cosy panoramic lounge keep the Christmas spirit alive.

Next, stroll over to Werdmühleplatz to take in the Singing Christmas Tree concert. Children from local schools stand on a tiered stage, arranged and decorated to look like a Christmas tree, and sing Christmas carols and other popular songs. A small Christmas market is also in the square.

Bahnhofstrasse is Zürich’s main downtown street and one of the world’s most expensive and exclusive shopping avenues. This year, new Christmas lighting known as “Lucy”, gives a special brilliance to the world-famous Bahnhofstrasse. Thousands of LEDs create moving clouds of light and gentle showers of luminescence. 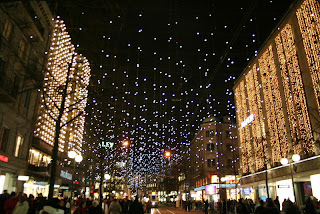 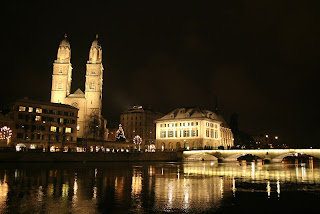 The twin towers of the Grossmünster are regarded as perhaps the most recognized landmark in Zurich.The two towers were first erected between 1487 and 1492. Originally, they had high wooden steeples, which were destroyed by fire in 1781, following which the present neo-Gothic tops were added. 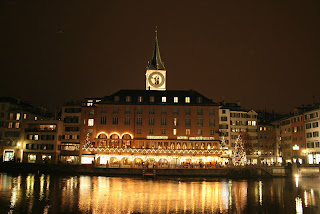 Across the Limmat River stands St. Peter Church. The steeple’s clock face has a diameter of 8.7 meters,  was built in 1534 and is the largest church clock face in Europe.

A short walk from St. Peter is the Fraumünster abbey, founded in 853 by Louis the German for his daughter Hildegard. He endowed the Benedictine convent with the lands of Zürich, Uri, and the Albis forest, and granted the convent immunity, placing it under his direct authority.

Don’t miss the beautiful guild houses all throughout the Old Town. There are fourteen historical Zünfte(guilds) under the system established in 1336 with the “guild revolution” of Rudolf Brun. They are the 13 guilds that predated 1336, plus the Gesellschaft zur Constaffel, originally consisting of the city’s nobles. Perhaps most beautiful, especially decorated in twinkling Christmas lights, is the Hotel Savoy, formerly two guilds, tanners and shoemakers, united in 1877. 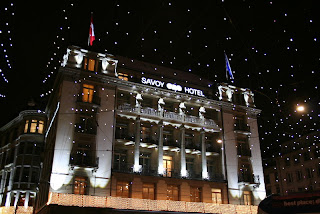 Of course, no trip to Zürich would be complete without dining on fondue. Restaurant Le Dézaley, famous for their array of fondues (cheese, chinoise, and bourguignonne). The moto Le vin se boit au Dézaley “pure le matin, a midi sans eau, le soir comme le bon Dieu l’a fait. (The wine in Dézaley drinks himself, purely in the morning, at noon with no water in the evening God has made him such) adorns the walls of the restaurant. 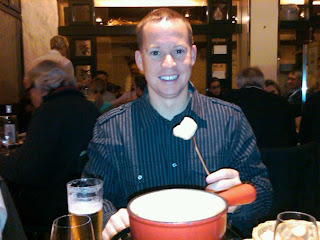 We dined on both the famous family secret recipe cheese fondue and the chinoise fondue. The chinoise is a Court Bouillon. Veal, beef, and chicken are dipped to cook in the broth and then dipped into an array of dipping sauces. At meal’s end, the much flavored broth is served with or without sherry wine.

The history of fondue is centuries old. In the Alps, the herdsmen were cut off from much of the environment. The staple foods, which could be easily produced there, were bread and cheese and thus came about the fondue.

In Switzerland, the cheese fondue holds status of a National Court and many customs and habits have grown up around it. Thus, it is as common custom a participant who loses his piece of bread, buys a round of white wine, brandy, or the like, or gets up to sing a song.