You are here: Home / Europe / Italy / Visiting Cinque Terre and the Gulf of Poets by Ferry Overhanging coasts colorful with houses that cling to the cliffsides, bays and small beaches, terraced vineyards climbing up from the sea: this is Cinque Terre and the Gulf of Poets. Hiking trails run between each of the five villages, which Cinque Terre (literally translated to five lands) is name for. Over-crowded and popular with tourists in summer, we visited in the peak of the season when it was just too hot and miserable to even consider hiking between any of the villages. Instead, the ferry is an excellent option to see the villages from the water and hop-on-hop-off to the villages of interest. 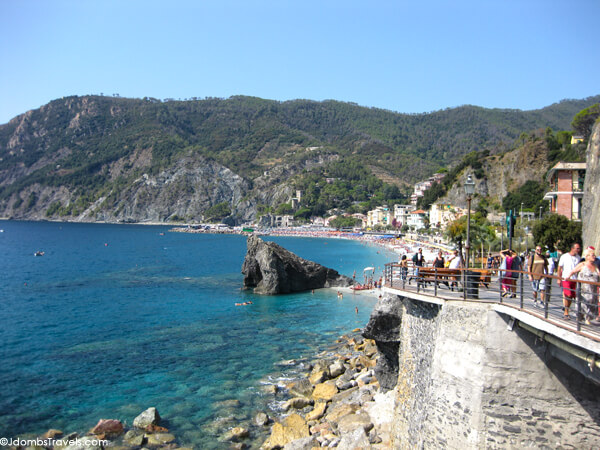 Monterosso al Mare is the northernmost of the five villages of Cinque Terre and is divided by a central tunnel that connects the Old Town and the New Town. It is also the most extensive sand beach of the five villages and is well used by tourists and locals alike. Monterosso al Mare was our favorite of the villages and we spent time wandering in and out of the shops around the Old Town and searching for the perfect cup of gelato in the New Town. Vernazza is said to be the most dramatic and picturesque of Cinque Terre. The web of carrugi (narrow lanes) and staircases converge in Piazza Marconi, the main square, overlooking the sea. The church of Santa Margherita d’Antiochia, built in 1318, stands in the piazza and is said to have foundations in the sea. Opposite on the craggy cliff stands the Doria Castle, which was once a strategic defense against and lookout tower for spotting pirates. Vernazza also has a tiny beach, but the rocks are a perfect place to soak up some sun and have a picnic lunch.

Corniglia is the only of the five villages that cannot be visited by the ferry since unlike the other villages, it is not directly adjacent to the sea. A wildfire dominating the hillside prevented anyone from visiting and we watched a helicopter and plane make a continual loop as they scooped up water from the sea and dumped the water fighting to extinguish the fire before it spread further. While we did enjoy Monterosso al Mare, we found the colorful houses and medieval streets that lead up from Portovenere’s harbor to the castle to be much more charming and far less crowded than the village of Cinque Terre. Below the castle sits the picturesque black and white striped church of San Pietro, which was once the site of a temple to Venus for which Portovenere gets its name. There are fantastic views of the church of San Pietro on the path leading up to the castle. Lerici, just minutes from the villages of Cinque Terre, has largely managed to evade the tourist radar and we were more than happy to make it our base during our stay. A jumble of pastel colored buildings line the crescent shaped beaches and waterfront cafes look out to the craggy cliff melting into the sparkling sea. An imposing medieval castle looms above Piazza Garibaldi, Lerici’s central piazza, where you’ll find Gelateria Arcobaleno serving up the best gelato in the area.

Where To StayWhere To EatGetting Around Cinque Terre
Stay at Doria Park Hotel Lerici, just a few minutes walk from Lerici’s Piazza Garibaldi.
Book a table at Bontà Nascoste (Via Cavour 52, Lerici). It is renowned for its pesto and seafood, but only has 8 tables so be sure to make a reservation.