You are here: Home / Europe / Italy / Cittadella: A Hidden Gem in the Veneto

I couldn’t believe I was the only one on the Medieval wall. “It’s like this most of the time,” Ilaria told me as we walked. On one hand, it was utter bliss to be away from the crowds that descend on Italy’s most popular cities in summer. On the other, it’s a shame so many travelers miss a hidden gem like Cittadella because it isn’t in the guide books. Though you can walk it end-to-end in about 10 minutes, Cittadella has a lot to offer and makes a fantastic day trip from Venice. 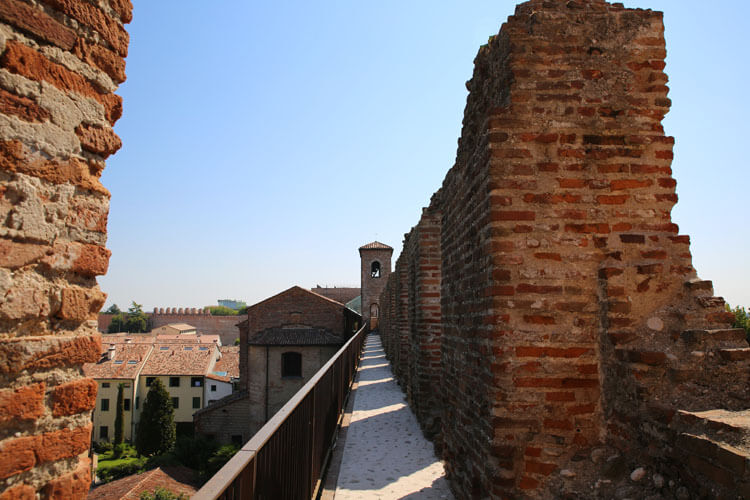 Walking the walls above Cittadella

The Veneto, most famous for the Venetian Lagoon, is dotted with walled towns. None are so well preserved as Cittadella, located just one hour by train from Venice. And unlike the Veneto’s other walled towns like Marostica and Castelfranco Veneto, you can walk the nearly 1.5 kilometers of Medieval defensive walls for a birds-eye view of the town. 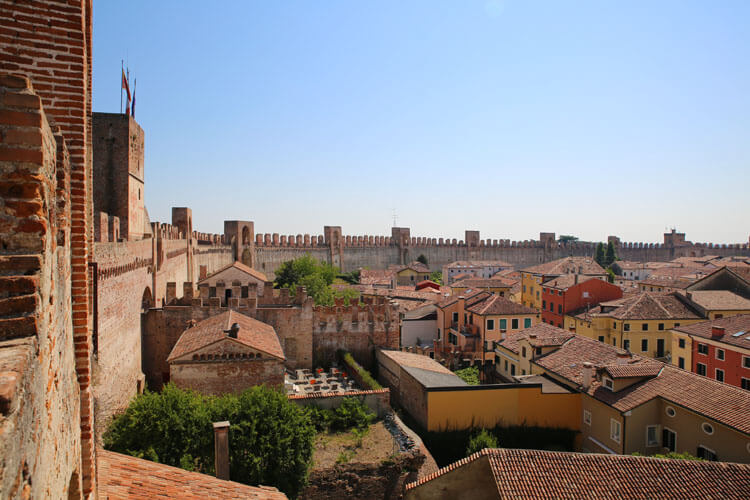 This area of the Veneto was settled by the Romans and in 148 BC they built the Postumia Road that connected Genoa with Aquileia. It wasn’t until the 13th century that Cittadella was built though; its location strategically chosen to defend Padua’s borders from Treviso and Vicenza. And defend it did through a series of wars that saw the town change hands from the Carraresi to the Venetian Republic and even Napoleon and the Hapsburg before finally being returned under the new Kingdom of Italy. 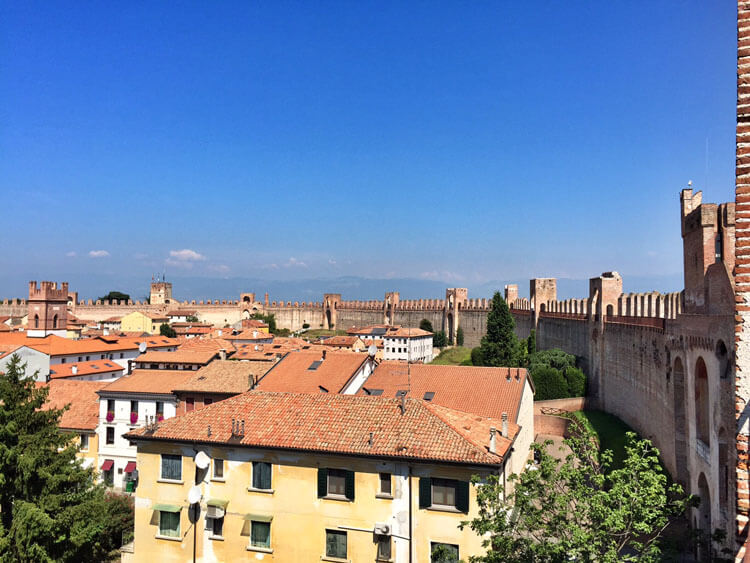 The 1461 meters of walls hug the historic center of Cittadella in an oval shape, making them some of the most unique and beautiful defensive walls in all of Europe. Just two meters thick and 14 meters high, a walk around the entirety of Cittadella isn’t for acrophobes. But if peering down upon the buildings below you doesn’t make you go weak at the knees, spending the hour or so it takes to circle the city is well worth it.

The views seems to change every couple of meters and before you know it, you’ve snapped hundreds of photos from every seeming angle. 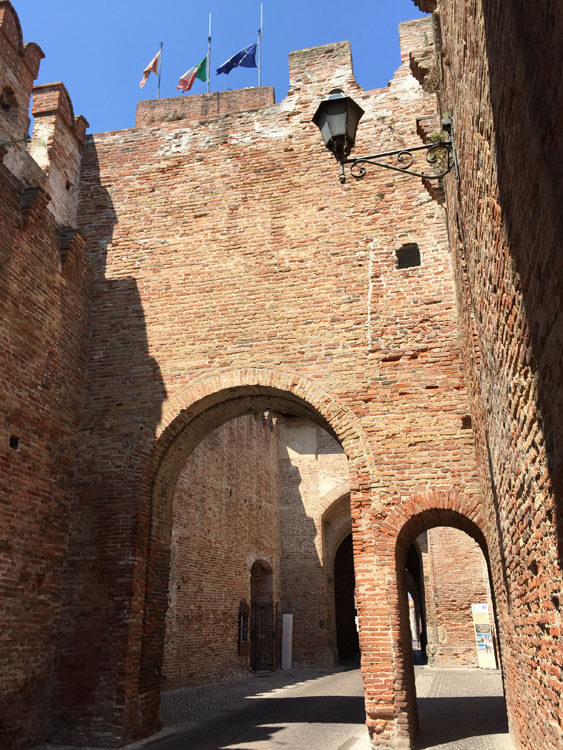 Cittadella has four gates to the city, each with  a keep, and twelve towers. You enter the walls after purchasing your ticket from the Tourist Office, which is located at the Bassano Gate. This is the most strongly fortified and important of the gates, with a system of five gates and both an exterior and interior moat. The gate faces in a direction that you could easily see enemies approaching from both Treviso and Vicenza. 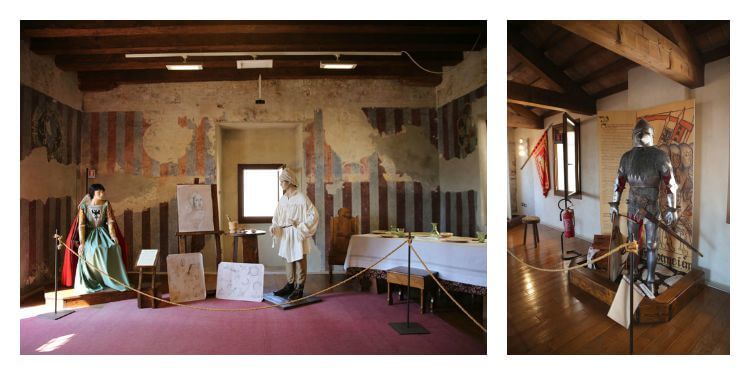 You can also visit the Captain’s House, which houses some of the best preserved frescoes from the Malatesta family in the 16th century and a small museum that shows the progression of armor worn by soldiers that defended the city. At the Porto Padova directly across the city from Porto Bassano, you can visit the small archeological museum and climb to the roof of the Malta Tower. 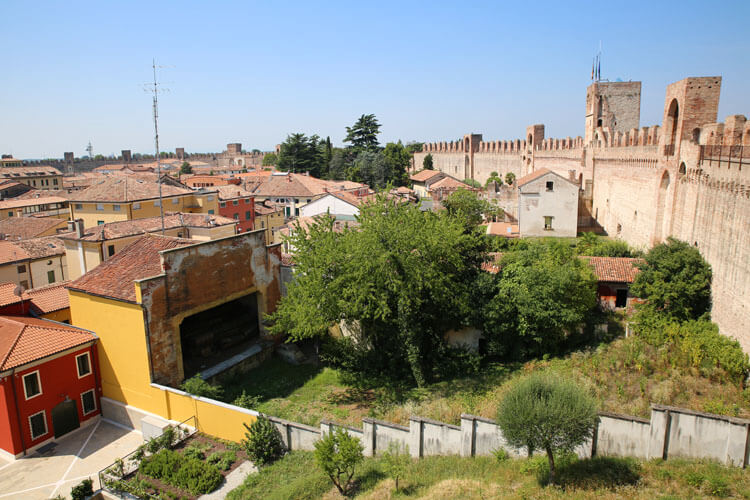 Looking down on the old cinema

You can also exit the walls if you don’t want to walk the full circumference, but I highly recommend continuing the full way around. You can get a look at the old cinema, where the movies were projected on the wall. It’s fallen in to disrepair, though I could imagine watching a movie under the stars.

For a different perspective of the walls, you can also rental a motor or row boat and enjoy boating around the city’s exterior moat. 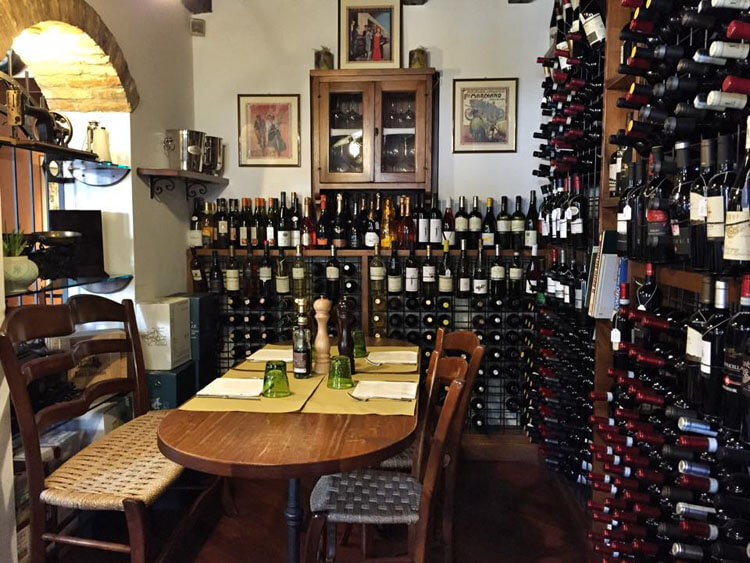 A day up on the walls and rowing around the city is sure to leave you famished. Ai Bei is one of Cittadella’s best restaurants and you won’t want to miss the opportunity to dine in the enoteca’s wine cellar. The food is outstanding and I highly recommend the fettucine with porcini mushrooms and smoked goose. It’s keep piping hot wrapped up in paper and as you untwist the parchment, the delicious scent of the ragu wafts out. It was too hot to be hungry for a multi-course meal on my visit, but another table ordered the steaks, which were plump and juicy.

Ai Bei is located at Piazza Scalco 10 and is open for lunch Tuesday – Friday and Sunday from 11:30am – 3pm, for dinner and the bar 6pm – 2am Tuesday – Sunday. Closed Monday. 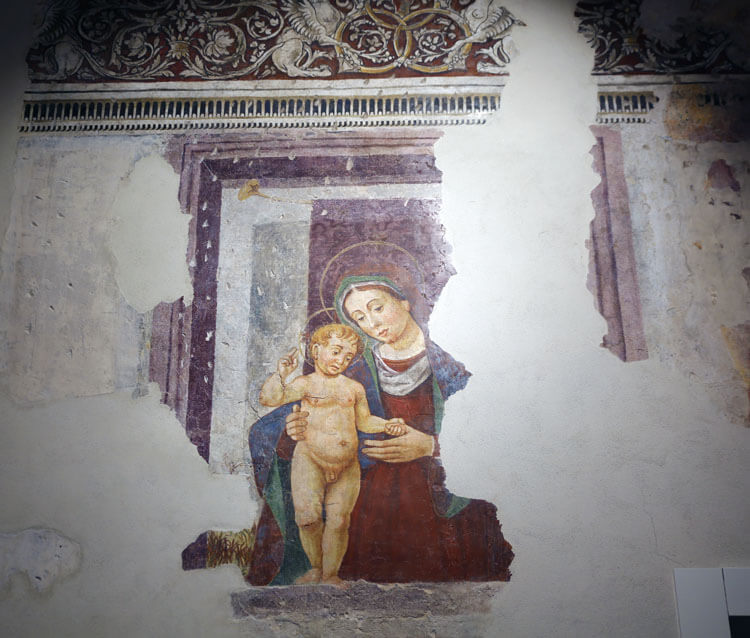 The Madonna and Child at Palazzo Pretorio

Cittadella also has quite a few wonderful art galleries for being such a compact town that can be walked end-to-end in just 10 minutes time. Don’t miss a visit to the Palazzo Pretorio, the former governor’s residence which is now a foundation that organizes national art exhibitions. You can see wonderful 16th century frescoes as well as admire current exhibits, like the contemporary exhibition by Milanese artist Giovanna Ricotta that was on during my visit.

And when you’ve had enough history and culture, the city offers an impressive shopping scene with everything from Italian fashion to artisan soaps. Best of all, you won’t have to contend with the hordes of cruise ship passengers looking for souvenirs in many of Venice’s overpriced shops. Photo courtesy of Turismo a Cittadella

Each September,  Cittadella also hosts a Medieval re-enactment going back in time with Medieval markets, archers, games, music and special attractions like a falconry show with live birds of prey.

The Medieval re-enactment takes place on September 26 – 27, 2015 from 9am – 7pm in the historic center and outside the walls.

Getting ThereWalking the WallsWorkshops for Kids
Cittadella is easily reached from Venice on the train to the Cittadella station, just a 10 minute walk from the city center and costs about €6 each way. Check the Trenitalia website for timetables. Cittadella is also easily reached by car and there is free parking outside the city walls.
Cittadella organizes Medieval workshops such as othic Writing, Leather Crafting and Moulding with Clay on the first Sunday of each month from 3 – 4:30pm for families. You need a reservation and can sign up by calling the Tourist Office at +39 0499404485. The cost is €5.50 per person.

My visit to Cittadella was hosted by Turismo a Cittadella in order to bring you this story. However, Luxe Adventure Traveler maintains full editorial control of the content published on this site. As always, all thoughts, opinions, and enthusiasm for travel are entirely our own.