Mounds rose up on either side of the deserted road. We hadn’t seen another car for well over an hour as we drove toward Craco, Italy. “It looks like Texas,” my Texan friend Leah Travels remarked. I haven’t spent much time in Texas other than to fly through Houston Intercontinental Airport, but it looked like what I imagine the Badlands of South Dakota must look like.

Half expecting a tumbleweed to blow across the road, we weaved around the mounds for a while before eventually turning off on to a dirt road. A faded sign you’d miss if you blinked announced Craco was indeed in this direction. This wasn’t like anything I’ve ever seen in Italy or imagined the instep of Italy’s boot would look like. The coast and sea were a mere 25 miles away. I wasn’t too far off in my likening the mounds to the Badlands. They are called calanchi, meaning Badlands in Italian and have been formed by intensive erosion to the area.

Rounding a bend, our first signs of civilization came in to view. A town stood majestically on a hill overlooking the valley, and from this vantage point you’d never know anything was amiss.

Arriving at the village, which is quite literally under lock and key, you realize that all that is left behind is a shell of what was clearly once a magnificent hilltop town.

Craco is not open to the public because of safety concerns and because the homes are still privately owned by many of the families that were forced to abandon them between the 1960s and 1980. It is partially accessible on a guided tour, and a very knowledgeable guide named William even gives tours in English.

A Brief History of Craco

Our tour actually started in the small Visitor Center with a short history of Craco. It was founded in 540 AD by the Greeks who had moved inland in the Basilicata region. William told us he would point out some of the tombs that had been found dating back to the 8th century once we entered the town.

The buildings we see today above the tombs date back as far as 1060. A university was established in Craco in 1276 and the population grew from 450 to over 2500 by the 16th century. The town had been continually expanded and by the 19th century, it had reached its threshold of expansion. Little did the townspeople know the stress the expansion was putting on the hillside beneath their palaces, squares, school, cinema and shops. 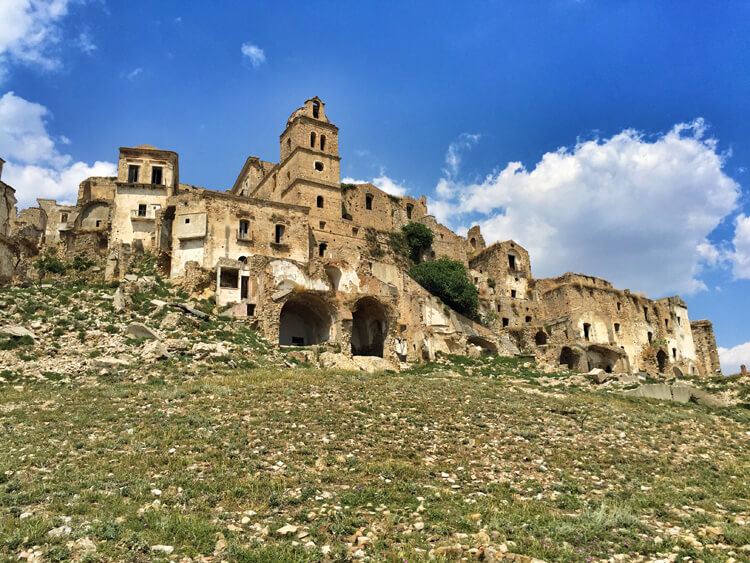 This area of Basilicata has long been plagued by intensive erosion, landslides and earthquakes. But the urban expansion of Craco primarily caused the devastating landslide of 1963. The remaining 1800 residents that hadn’t already immigrated to America after dealing with the hardships of farming in the unstable clay soil were forced to leave their homes for safety reasons.

The displaced families moved to Craco Peschiera in the valley below. For years they were forced to live in tent cities while the government struggled to create housing options for them. The clearly visible hilltop Craco served as a daily painful reminder to what they had to hastily leave behind.

William unlocked the gate and we stepped inside, pausing briefly to put on hair nets and hard hats for our own safety. The hour long tour would take us along the exterior of the town and then inside it, climbing up to the highest point, the Torre Normanna.

Within only a few minutes, we were peeking inside the abandoned bakery. I’m not sure what I was expecting, but it certainly wasn’t scenes with furniture and machines left behind. It was then that I realized that this “ghost town tour” was something entirely different than I thought it would be.

As we walked, William told us the sad stories of the people that lived here. One man even refused to leave when Craco was evacuated and he lived out his days there until he was over 100 years old. Just as William pointed toward where the man had lived out his days, a shepherd passed through with his flock of goats and donkeys. Another reminder that Craco became a ghost town really not all that long ago.

We continued on in to the town. Inside, many of the buildings have been completely closed off for both safety reasons and because thieves have stolen the ancient statues, frescoes and artifacts from inside.

I’m surprised to learn that even in its decayed state, Craco is host to concerts and other cultural events which help to bring in money to preserve the town. William points out a beautiful spot where outdoor concerts are held. As only 35 people are allowed inside of the old city at one time, I imagine the concerts must be intimate affairs.

As we wander a bit following William from one beautiful viewpoint to the next, I can see why Hollywood has also embraced Craco. The town has been the movie set for scenes from Mel Gibson’s Passion of the Christ, James Bond 007 Quantum of Solace, a handful of other Italian films, and commercials including a Pepsi commercial that was filmed just earlier this year.

The old town in its various stages of decay might be perfect for a haunted Hollywood tale, but there are absolutely no ghosts here. William is adamant about it. He explains that up on the hill it is often windy, and the inevitable creaks and groans a slowly crumbling town makes have previous tourists spinning tales.

As we climb up to the Torre Normanna, I can’t believe how quickly the time has gone by. I linger as long as possible gazing out over Italy’s Badlands thinking just how painful it must have been for the former townspeople to leave such a beautiful place. There may not be any ghosts haunting the town, but the very town itself stands as a haunting memory of a childhood home to many now living in the village below.

Though the tour turned out to be different than what I had in my mind touring an Italian ghost town would be like, it was fascinating. Craco is definitely off-the-beaten-path and well worth a visit.

Getting ThereCraco Tours
Craco can only be reached by car. The GPS coordinates are 40°22′43.16″N 16°26′25.25″E and our Garmin GPS with European Maps easily took us right to the town. There is parking on the roadside near the gate.
Visits are by guided tour only and tours are available from 10am until sunset daily. The tours run approximately every hour and are about 1 hour in length. English tours are €15 per person. You can find contact information for the guides on the Comune di Craco website.