The deep forests and shimmering lakes of Dalsland, Sweden are an outdoor enthusiasts’ dream. The serene environment where moose roam, beaver build their dams, and salmon swim in winding streams is where explorers indulge in an array of activities. Covered in more lakes than any other Swedish province, the labyrinth of interconnected lakes are perfect for wild swimming, fishing, canoeing, and lakeside camping – just to name a few of the activities nature lovers can do in this idyllic setting.  Take a look at some of our favorite adventures from Dalsland: 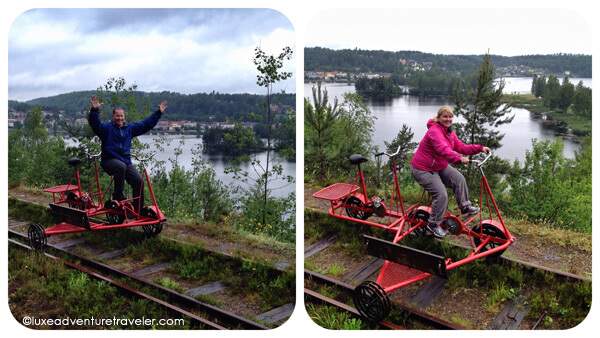 Railbiking sounded intriguing from the moment we heard about it, so we just had to give it a try (even in the rain). It is actually one of the most unique things to do and way to explore Dalsland. The Dal–Västra Värmlands Järnväg, or The Beautiful Vyernas Railway as it translates in English, is justly named so.

Adventures can travel on the old inspection trolleys converted to “railbikes” with a bike saddle on the now unused Dal–Västra Värmlands Järnväg for 52 kilometers between Bengtsfors and Årjäng. You can even load up your trolley and pedal along the old railway for a multi-day adventure, stopping to camp along the way.

If you’re not up for pedaling the full length, not to worry. You can rent the railbikes for anywhere from 1 hour to several days. You can start from either direction and pedal as far as you like. Just turn your trolley around and head back to where you came from when you’re done.

We had the railroad to ourselves the day we went railbiking. It had been raining continuously all morning and even the Swedes who are used to being outdoors in all types of weather looked at us like we were crazy when we wanted to railbike in the rain. Railbikes can come off the railroad track if you get too much speed and a wet railroad just increases those chances. There is also a crossing where there is regularly residential traffic not far from the station in Bengtsfors and the attendant told us this is where accidents happen when they do happen.

Railbiking is safe so long as you are aware that the trolley can come off the track and that you need to slow down in time to stop at the crossing. Once we got going, we laughed the whole time. Living up to its name, The Beautiful Vyernas Railway, there are plenty of picturesque spots to stop for photos. Just remember to always remove your railbike from the railroad tracks so you’re not in the way for others on the railroad. 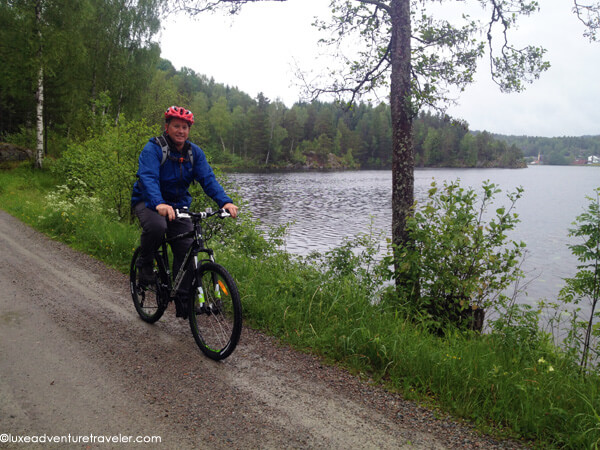 If railbiking sounds a bit too crazy or just plain odd, there are plenty of trails inching along the lakes, through the forests, and across the plains which are perfect for mountain biking. You can pick up a map of the various cycling routes through Dalsland at any of the tourist offices or you can make your own route.

Veer off of gravel roads for exhilarating forest paths the edge along the lake before zigging back into the trees. You might even encounter some of Dalsland’s wildlife like moose or beavers. The gravel roads connect villages, farms, museums, cafes, art studios, and shops. There’s never a fear of getting lost for visitors unfamiliar with the area, even on unknown roads, as you can rent a GPS from companies like Silverlake Camp, where we also rented mountain bikes.

It was raining steadily when we set out from Silverlake Camp, so we stuck to the lakeside path and biked to the dam hoping to see some beaver. We didn’t have luck spotting beaver, but there were beautiful views around every bend – even in the rain.

Mountain bike rental with helmet from Silverlake Camp is 200kr (about $30 USD) per day. Dalsland has a unique lake system of over 1000 lakes, many of which are linked together by the Dalsland canal. The clear water and clean air beckon adventures to explore the island dotted lakes by canoe.

Though we are no strangers to kayaking, we’d actually never been in a canoe together. With a waterproof map and some snacks, we set out from our campsite. We paddled until our arms ached and then pulled our canoe ashore at a sandy beach down the lake for a rest.

We tried to explore one teeny tiny island situated in the middle of the lake, but it was like a scene out of Alfred Hitchcock’s The Birds when a nest of seagulls started dive bombing threateningly. We quickly paddled away. We paddled around other islands and along rocky cliffs rising from the sea. 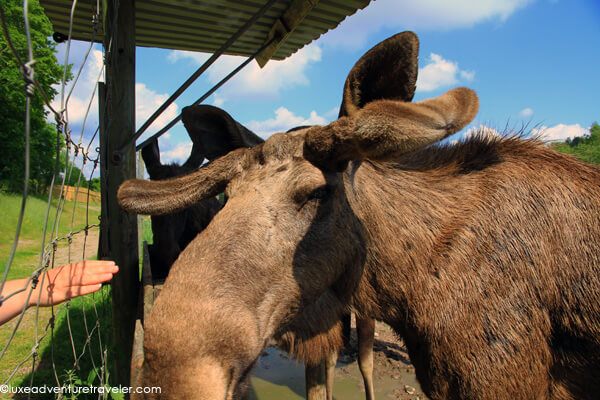 Feeding Moose at the Moosepark

More than 500,000 moose roam Sweden’s forests, though even driving some of the forest roads at a turtle’s crawl we still didn’t spot any wild moose. We did, however, have the chance to get up close with several moose at Dalsland’s Aktiviteter Center.

As we followed Pontus, owner of Dalsland Aktiviteter to the protected moose area, the moose came right away knowing they were in for a treat. Pontus lovingly patted the moose and they gave him a nudge back. The large bull moose (the term for a male moose) named Thor had been found as just a baby after his mother died and grew up on the 14 hectares of land at Dalsland Aktiviteter. He’d clearly come to love Pontus. Another moose was currently pregnant and Pontus explained she was missing because she was off somewhere getting ready to birth her calf.

We learned about how the bull moose loose their antlers each fall and grow a new set every spring. Only the males grow antlers and these are for impressing cows (female moose) and showing their dominance in the pack.

Pontus knows so much about moose because he grew up with them, hunting moose from a young age with his father. He still hunts moose during the season, which helps to keep Sweden’s population under control. Though he doesn’t just hunt for fun; the meat is used and the cafe at Dalsland Aktiviteter specializes in a moose burger.

We couldn’t pass up on trying the moose burgers and they were delicious. Moose meat is full of protein and is much healthier than beef. It’s a perfect meal for fueling up before canoeing around Dalsland’s lakes. 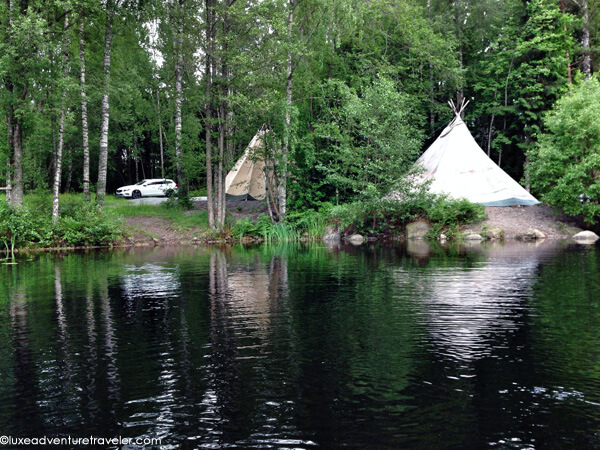 Canoeing and feeding moose aren’t the only activities offered at Dalsland Aktiviteter; you can do everything from ziplining on Sweden’s longest zipline to camping in teepees at several campsites. Camping in the teepees was actually my favorite thing we did on our In A Volvo adventure.

There are some conveniences that border on glamping, like having shower facilities at the reception center, jacuzzi, sauna and an excellent dinner. Though it was nearly a Survivor situation when we had to chop our own wood for the fire and get it lit. Tim, who I’m not sure has actually ever chopped wooded before, did nick himself with the axe. Chopping wood for s’mores and dinner

But it was nothing that a s’more couldn’t fix. We’d found marshmallows and chocolate at a grocery store in town and substituted gingersnaps for graham crackers. Tim chopped enough wood to get the fire going and I kept his energy up for more chopping by supplying a constant stream of toasted marshmallow and melted chocolate sandwiched between gingersnaps. I dubbed our creation the “Swedish s’more” and it was actually pretty delicious.

Pontus had delivered us a cooler with all the fixings for dinner: seasoned steaks to grill up, potatoes, salad, bread and dessert. We had cold beers, sodas, and a pot to make coffee or tea. It was perfectly for enjoying a leisurely dinner under the midnight sun.

The teepees are basic, but comfortable. You put down pine branches and reindeer furs, then put your sleeping bag on top. Even in Sweden’s cool early summer, we were plenty warm all night. And luckily for me, Tim got up and got the fire going before coaxing me out of my sleeping bag for breakfast.

Camping at Dalsland Aktiviteter with dinner and activities ranges from 990kr to 1890 kr ($150 – $275 USD) per family depending on the activities selected.

Exploring the Ruins of Bäckefors

The old iron factory and village is now mostly in ruins, but it is the best preserved memories of the 19th century iron industry in Dalsland. Here you can see the ruins of the Lancashire smiths from England and a small museum explains more about the iron factory. Most of the smithys lie in stone ruins, but The Brewery remains in excellent condition and is painted the Swedish red so commonly seen throughout the country. 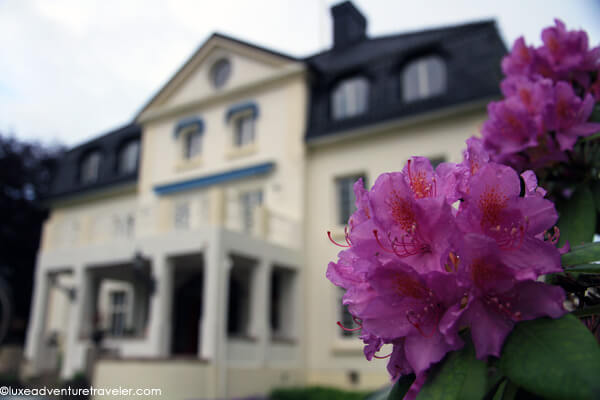 Biking, canoeing, and camping might not be the most romantic of activities, but after all that outdoorsy togetherness head to the Baldersnäs Estate. It’s a turn of the century Swedish mansion romantically set on the sparkling shores of Lake Laxsjön. You can stay either in the main house or in two new hotel wings on the tree-lined avenue leading down toward the lake.

The estate’s English Park was Sweden’s largest in its heyday and though not all of it exists anymore, it’s still a lovely place to stroll amongst the fragrant blooms and exotic species of trees. Or talk a walk hand-in-hand along the lake, gazing out at the man-made islands.

Baldersnäs also has a spa where you can relax in the saunas and ease any aches from the plethora of outdoor activities and camping. Strolling around the Baldersnas Estate

The restaurant prides itself of serving organic produce from the estate, locally sourced fish and game meats, and fruits and berries from the forest. The menu changes daily and is based upon what is in season and freshly available. We enjoyed wine pairings and a 5-course gourmet meal including lake salmon, mushrooms from the forest, and deer filet. Weather permitting you can dine outside on the terrace or in the charming dining room.

Our trip was provided by Visit Sweden and Volvo as part of the #WestSweden and #inaVolvo campaign. As always, all opinions about the experiences, restaurants, and accommodations are entirely our own.

It’s #nationalpuppyday! A dog is a true joy in l

We can’t control the situation. But we can contr

Bordeaux: before and after. We live in the very c

You may have heard we’re in full lockdown here i