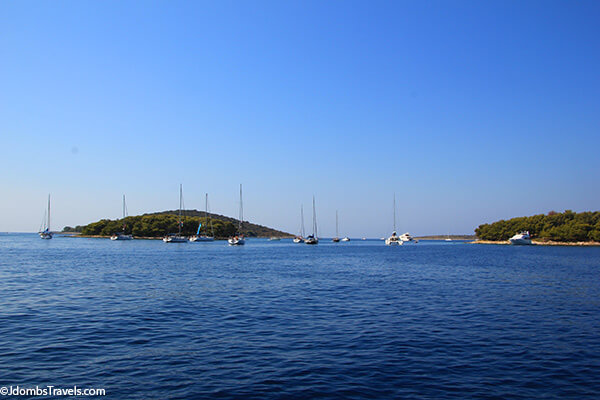 Sailing toward Solta’s archipelago of 7 islands

I’m on a road trip along Croatia’s Dalmatian Coast and after two days of being (mostly) good while we drove and walked around old towns, I was finally rewarded with a day sailing trip to the Dalmatian Islands. If you’ve been following along on my travels, you know that I love to swim.
My mom and dad stopped in to the local travel agency in Split Riva (Split’s waterfront) when we arrived to ask about a boat excursion that I could go on and would have places I could actually swim. Can you believe the public beaches in Croatia don’t allow dogs on them either? (See my rant about public beaches not allowing dogs on them.) The lady was really nice and recommended we go on the Pisanica Blue Lagoon Tour because we would have two stops to swim. She even called just to double-check with the boat crew that I could come along. 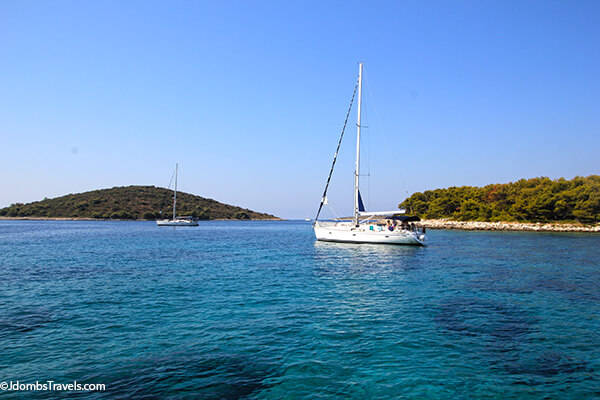 I was so excited when my mom packed the beach bag this morning and I saw my pool ball go in. I know what that means! Off we went for my second boat ride ever; my first boat ride was on the ferry around the Borromean Islands on Lake Maggiore and the boat ride was probably only 20 minutes or so to each island. This time it took around 1 1/2 hours to reach our first stop and we even saw dolphins along the way. When we finally got to the village of Maslinica on the island of Solta, I was ready to get in the water! But I guess my mom and dad were hungry; they made me wait another 20 minutes while they had Croatian pancakes with marmalade (looked like crepes to me) and sipped on cappuccinos in a waterfront cafe. 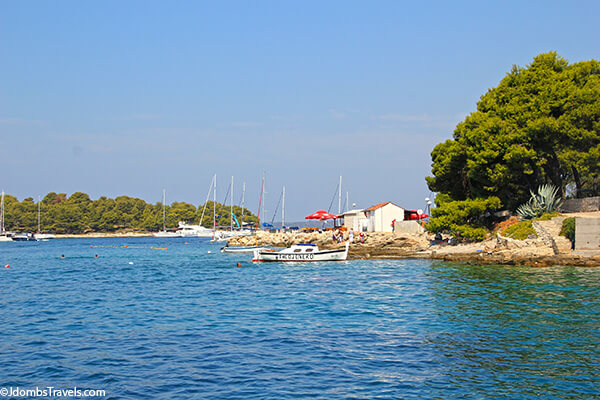 Finally we went to swim and I’d had enough of waiting for them so I dove right in while they put on water shoes and got out my pool ball. (Did I mention how much I love to swim?!) We found the perfect spot that looked like part of an old concrete pier where I could leap in to the water to retrieve my pool ball. We had around 2 1/2 hours of free time before we had to be back on the boat for lunch. 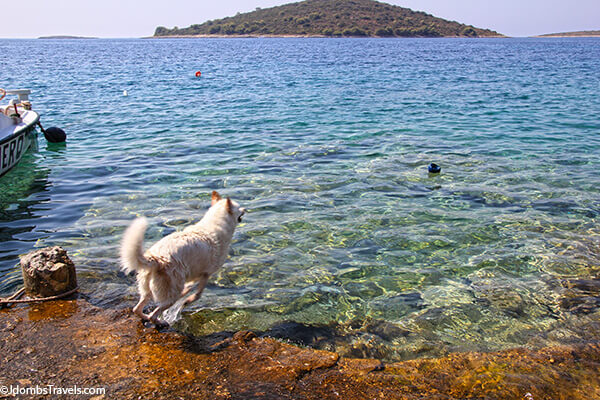 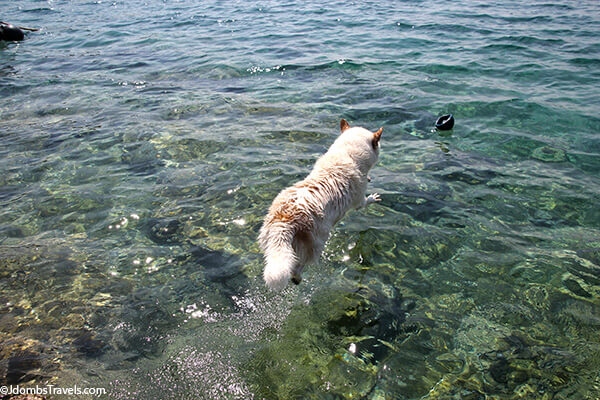 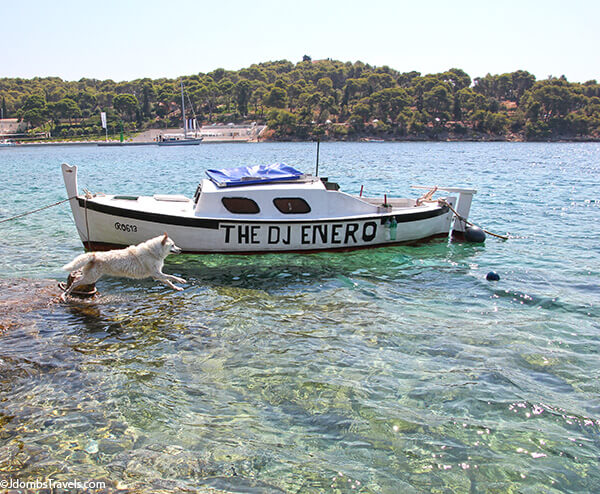 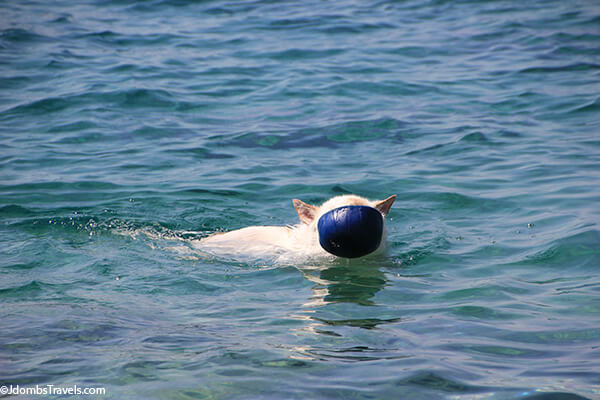 Retrieving my pool ball in Solta 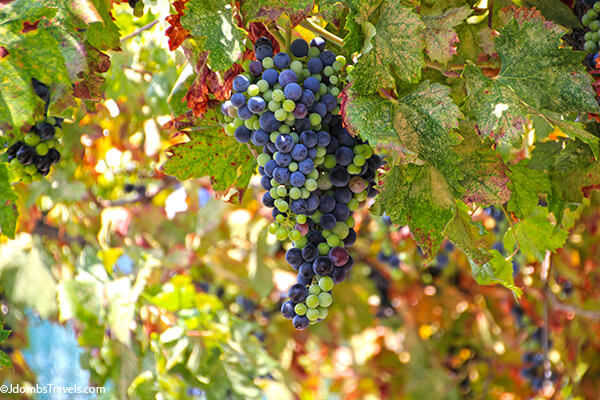 Grapes in a state of veraison on Solta. But I’m not allowed to eat these because grapes are bad for dogs.

After lunch of fish and chicken with salad (I only got some pieces of bread), we sailed on to our next stop. The Blue Lagoon is a private preserve of amazingly clear and multi-hued blue water, which meant we were dropping anchor at least 100 yards off shore of some little uninhabited island. The water was deep enough where we dropped anchor that the captain encouraged jumping off the top of the boat and into the sea. I’m an Aussie Shepard mix and I like to keep my “herd” all together, so I went crazy watching people jump in. Were they okay? Did they need a rescue dog?

After the people on board that hadn’t jumped in came to see if I was okay (because I was crying so loudly), my mom quickly pulled on her water shoes and jumped in the water. My dad could hardly restrain me long enough to get my collar off and I had taken a flying leap into the water. The ten or so people already swimming gave my dive a perfect 10 and all let up a loud cheer.

I swam all the way to shore and refused to get out of the water to rest. We were the first to shore and others began following us, so I swam out to meet them and make sure they were all okay! Oops, my mom cut up her leg on a sea urchin chasing after me at one point and that apparently stung for the rest of the afternoon. Then I took off swimming after an older guy that started back toward the boat. He was quick! I had to turbo doggy paddle to catch up and soon my mom and dad were swimming as quickly as they could after me. I got some assistance from my dad to climb up the ladder and back on to the boat when the captain started yelling that a storm was coming in and we had to go. 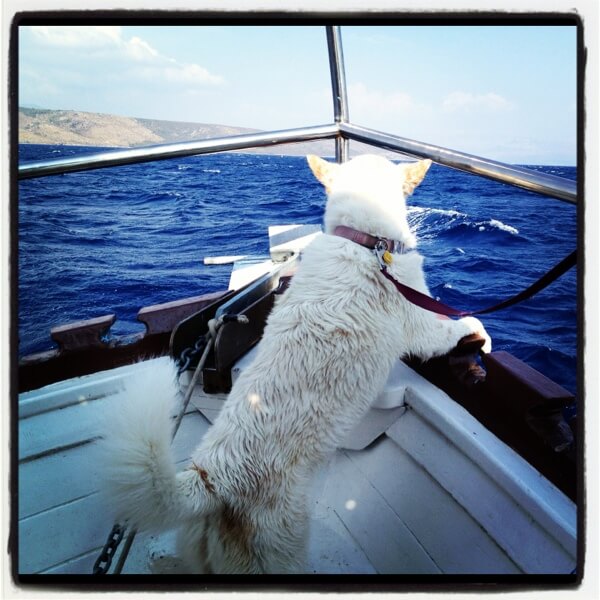 Riding up front all the way back to Split!

On the way back to Split, I rode up front like in the movie Titanic while the wind fluffed up my fur! I had a great day on the Pisanica!