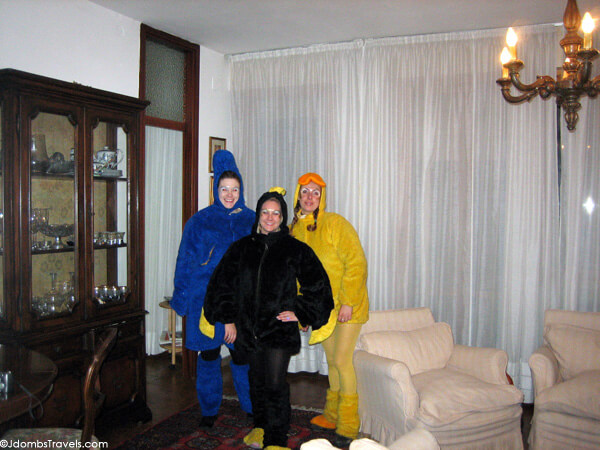 When in Italy, do as the Italians do!

…dressed as a duck. Yes, that is a yellow beak on my head.

Let me paint the picture for you of how exactly I came to be dressed as a duck. My friend Jess, the blue dolphin (pretty sure I recall a lot of wine at dinner to get her to wear that getup), and I decided to take a trip to Italy in 2006. We saved for months and spent many Friday nights pouring over guidebooks planning our trip. Jess’ family had hosted two Italian exchange students a few years earlier, one from near Milan and the other from Viareggio, who we planned to visit. We mapped our route from Rome to Milan and back, perfectly timing our visit to Tuscany with Carnevale di Viareggio festivities. And off to Italy we went, just in time for the Winter Olympics and Carnevale!

At Giovanna’s house in Viareggio, she wouldn’t hear of it for Jess and I to attend Carnevale in our regular clothes. It would just be taboo! In Viareggio, it’s not Carnevale if you’re not dressed up in something strange (ridiculous?). So Giovanna’s family went into a frenzy pulling out bags of costumes from years-gone-by and shoving them at Jess and I try on. Black duck it was for me and blue dolphin for Jess. Live bands get the crowds going at Rione We’ve had a lot of wine…

Giovanna took us to Rione, the neighborhood feasts where people eat, dance, sing, and mainly drink in one massive street party. Mobile stages make their way through the streets with live DJs blasting the latest Italian hits, sending the crowd into a singing, jumping up-and-down frenzy until the wee hours of the morning. Other mobile stands provide sustenance for the night like tortelli, an egg pasta filled with meat and meat ragu sauce, or french fries. And the wine flows as the party gets wilder and wilder. 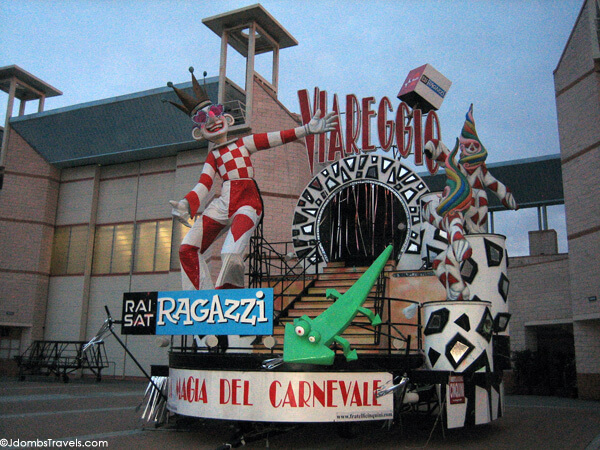 A float at Carnevale di Viareggio Is that George Bush? Carnevale goers drag themselves home in the early hours of the morning and grab a quick nap before the excitement of the afternoon giant papier-mâché floats parade along Viareggio’s seafront. Serious float worshipers can even get up extra early and wander around the giant floats at the warehouses where Masters of Viareggio literally spend all year creating these fantastical moving theaters.

Papier-mâché was actually invented in 1925 by a manufacturer from Viareggio named Antonio D’Arliano. And so every year artisans compete for who can build the most spectacular float over 20 meters high. It’s been a cultural tradition for 140 years in Viareggio and a triple cannon  shot out over the sea signals the official start to the parade.

Getting ThereCarnevale
Viareggio is easily reached by train from Rome, Florence, Pisa, Milan, or Venice. The arrival station is Viareggio. Check the timetable here.