You are here: Home / Europe / Switzerland / Five Fun Facts About Fondue (And Where to Eat it in Zermatt)

There are a few things that are quintessentially Swiss and come to mind immediately at the mention of Switzerland: cheese, oh-so-yummy Swiss chocolate, and fondue. It seems a trip to Switzerland isn’t complete without a delicious fondue, at least for us. But have you ever sat twirling your hunk of bread in the gooey melted cheese and wondered how fondue came to be national dish of Switzerland? Here are five fun facts about fondue: 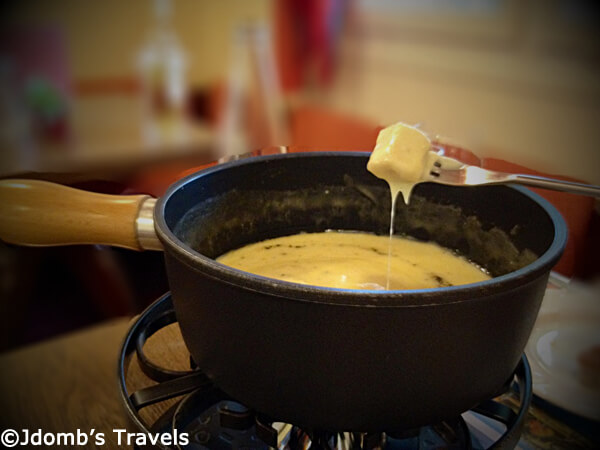 1. The history of fondue is centuries old! Fondue began as a way to use aged cheeses and bread to feed people that had limited access to fresh food during the winter months. As the fall wore on, the cheese age and bread became stale, making it much harder to eat. Local villagers discovered that if they melted their cheese with wine, garlic, and herbs and dipped the stale bread into the mixture, the bread would soften.

2. Fondue became the national dish of Switzerland when the Swiss Cheese Union (Schweizer Käseunion AG) modernized it and campaigned as a way to sell more cheese in the 1930s. 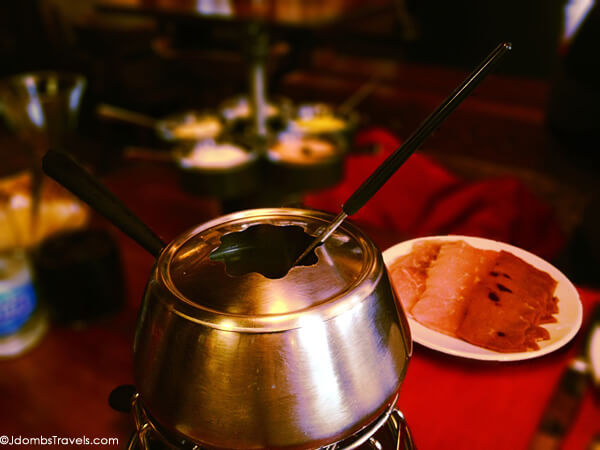 3. Fondue Chinoise was invented when a Swiss man was visiting China and was served a similar dish with broth instead of cheese. He reported back to Swiss chefs upon his return to Switzerland and the Court Bouillon was born. Thinly sliced strips of high quality veal, beef, and pork are served raw to be cooked in the broth, and then dipped into an array of dipping sauces. At meal’s end, the much flavored broth is served as a soup with or without sherry wine.

4. Fondue became a fad in American in the ’60s and ’70s after it was brought back by a jet setter who had it on a ski holiday. It was the Americans that then invented chocolate fondue. Where to eat Fondue in Zermatt

Restaurant Stadel is ta charming and welcoming little restaurant with wooden tables and a view of the Matterhorn (when the skies are clear) right in the heart of Zermatt. The menu boasts three kinds of cheese fondue, Fondue Chinoise, Fondue Bourguignonne, and a seafood fondue. We tried the Fondue Chinoise, with plenty of beef, veal, and pork to cook in the broth and was served with mixed salad, fries, pickled veggies, and fresh fruit. It pairs wonderfully with a Swiss Pinot Noir.

Thank you to Zermatt Tourimus for hosting us during our stay in Zermatt. As always, all opinions are entirely our own.