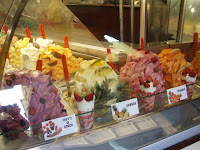 A 16th-century man from Florence, Bernardo Buontalenti, an architect and painter with a passion for cooking, is believed to have invented ice cream, which was then exported all over Europe with the famous “crema fiorentina” and “gelato Buontalenti”. So it is no wonder that Florence hosted the 1st Anuual Firenze Gelato Festival! The festival was complete with a history of gelato exhibit in the Piazza Santissima Annunziata, activities, demonstrations and, of course, ample opportunity to sample gelato! Some of my favorites were the mela verde (green apple) from the Freddie Follie shop and the caffe krunk (coffee crunch) from I Gelati Del Bondi, whose owner has been making gelato in his shop for 30 years. 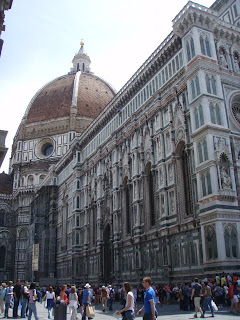 While wandering the gelato booths in Piazza del Duomo, one can’t help but admire the neo-Gothic green, red, and white Duomo. Brunelleschi’s Dome soars 100 meters into the sky and remains Florence’s tallest building. The Baptistry, with its famous bronze doors, dates back to the 4th century, making it one of Florence’s oldest buildings. Lorenzo Ghiberti’s famous bronze doors were commissioned in 1401 to mark the city’s deliverance from the plague. Each relief panel depicts a scriptural subject: 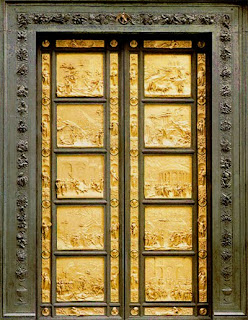 1. Aam and Eve are Expelled from Eden
2. Cain Murders his Brother, Abel
3. The Drunkenness of Noah and his Sacrifice
4. Abraham and the Sacrifice of Isaac
5. Esau and Jacob
6. Joseph Sold into Slavery
7. Moses Received the Ten Commandments
8. The Fall of Jericho
9. The Battle with the Philistines
10. Solomon and the Queen of Sheba 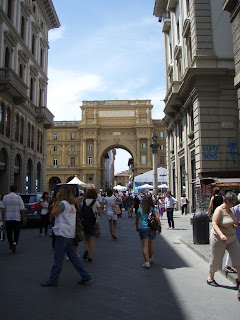 Piazza della Repubblica is the site of the old Roman forum and served as the city’s main food market until the 1860’s, when it was redeveloped and the triumphal arch was added. The inscription “Antico centro della citta, da secolare squalore, a vita nuova restituito” – “the ancient center of the city, squalid for centuries, restored to new life” – makes a derogatory reference to that fact that the piazza is the site of the old Jewish ghetto. 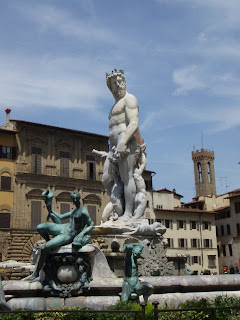 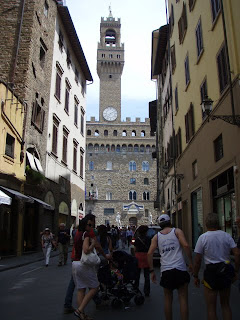 The fortress-like Palazzo Vecchio rises up in the Piazza della Signoria. The palazzo originally served as the city council, later became the Medici family home, and is today still used as the town hall. The piazza’s statues (some are copies) mark the city’s major historical events. The Rape of the Sabine Women by Giambologna were carved from a single block of flawed marble. The Fontana di Nettuno is the Roman god surrounded by water nymphs and commemorates Tuscan naval victories. 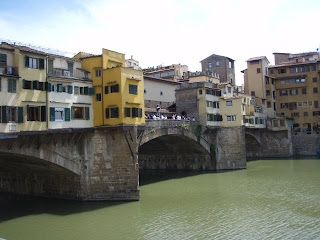 The Ponte Vecchio (Old Bridge) is aptly named as it is not only Florence’s oldest wholly-stone bridge, but also its’ most famous. Once occupied by butchers, the tenants are now jewelers and art dealers. Padlocks are locked all along the Ponte Vecchio. It is popularly connected to idea of love and lovers: by locking the padlock and throwing the key into the river, the lovers became eternally bonded. But be careful! There is a 50€ penalty for those caught locking something to the fence. 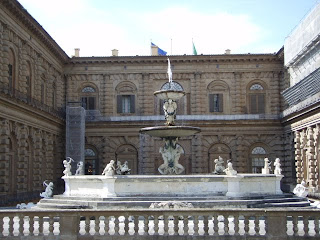 Luca Pitti, a 15th century banker, built his palazzo against the Boboli hill. The Medici family acquired the palazzo in 1550 and turned the hillside into magnificent gardens. Labyrinthine avenues of cypress trees lead to bubbling fountains, grottos, and stunning views of the city. The stone amphitheater is decorated with statues based on Roman myths such as the Fountain of the Ocean sculptured by Giambologna. The large oval lawn is marked by an Egyptian obelisk . Even higher up the hill is Neptune’s Fountain. The large Grotto by Buontalenti, in which the artist decorated internally and externally with stalactites to create the illusion of a natural grotto. Don’t miss the statue of a portly Bacchus sitting astride a very strained turtle. 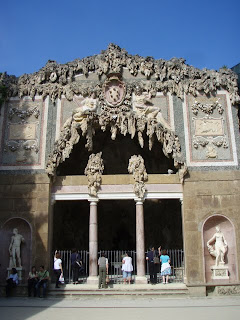 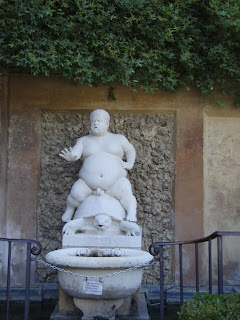 After all the climbing on the hillside, hit up the Firenze Gelato Festival for another round of tasting! 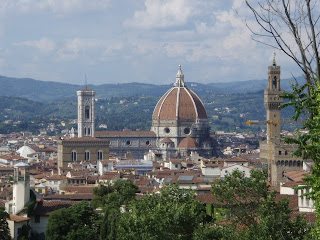