In case you haven’t heard, Montrealers are gaga over food. Montreal’s food scene is vibrant, urban, and international. Montrealers start their day with fresh baked pastries and bagels, use their lunch breaks to take cooking classes, and swing by Montreal’s markets on their way home. Dare I say that it practically borders on a food obsession? I mean, there’s even a Montreal Foodie Association with a calendar chock full of foodie events! And the rest of the world has caught on, flocking to Canada’s foodie capital to sample the international flavors and fare. Not sure where to start in the city that boasts the highest number of restaurants per capita in the world? Here are my top five foodie finds in Montreal: 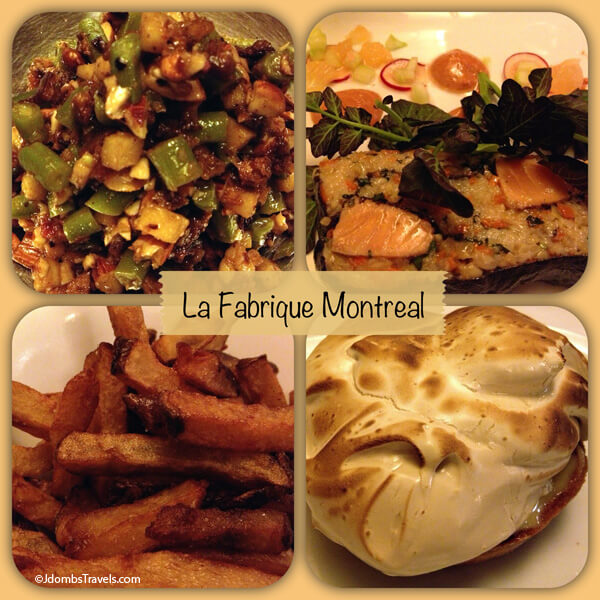 The kitchen takes center stage at La Fabrique, located between the Latin Quarter and the Plateau. The wood and concrete restaurant feels warm and welcoming with tables surrounding the raised open kitchen.

The menu is full of delicious sounding concoctions in a jug, in a bowl, in a terrine, or on a plate. But the decision of what to order became that much harder as I watched the chef and sous chef prepare artful dish after dish.

The menu changes seasonally but I learned that one signature dish that has appeared on La Fabrique’s menu since day one is the green bean salad. Fresh green beans are tossed with tomatoes, almonds, and cucumbers. Apples and croutons add a bit of crunch and a balsamic and truffle vinaigrette finishes it off.

The server recommended I pair my green bean salad with the burned crust salmon. It actually looks like a giant piece of sushi, wrapped in seaweed with rice, crispy vegetables, grapefruit and caramel mayo.

Both the green bean salad and burned skin salmon were delicious, but I couldn’t resist the smells of the fries that kept wafting toward me. Fried in duck fat, the fries were surprisingly not greasy and super tasty! Not at all a shock that bowl after bowl of fries made their way to hungry diners around the completely full restaurant.

I finished it all off with an amazing lemon merengue tart that was so good I would have licked the plate clean if I could of.

Aside from the delicious food, I loved the unique touches like the bread basket that hung out of the way on a hook on the wall, the exposed brick, and chalkboards. 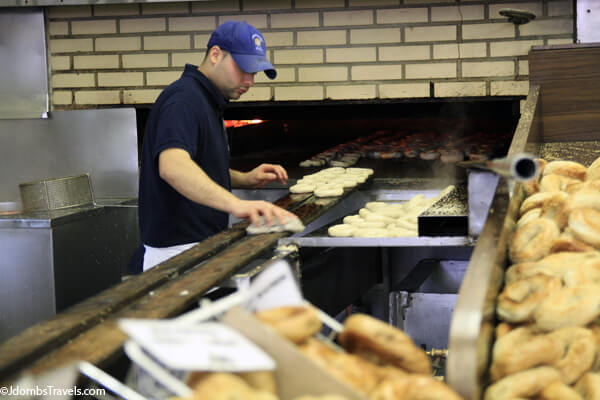 Bagels don’t get any fresher than this!

Oh, the bagels! Pop in to St-Viatreur Bagel and you’re guaranteed to see the bagels handmade before your very eyes. Hand rolled, boiled, wood-fired, and dipped in poppy or sesame seeds, they don’t get any fresher than this and they make over 10,000 every single day! Still hot out of the oven, grab some cream cheese and dig in at the little tables near the window while people watching. I visited twice (and I confess I actually picked up a bagel for my sister-in-law, but when her flight was delayed even longer, I ate hers too).

Note that the rosemary sea salt bagels are actually made at another St-Viateur location, but they are fresh daily and delicious!

St-Viateur Bagel is located at 263 Rue Saint Viateur Ouest and is open 24 hours. 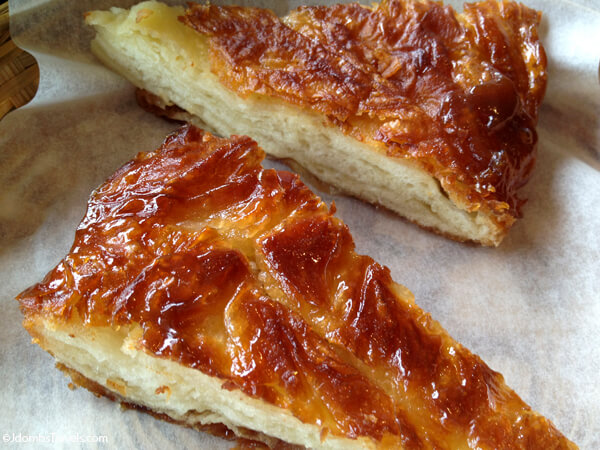 The butteriness of this bakery hit my nose the minute I pushed open the door. Their specialty, and namesake, is their kouign amann. Sliced like a cake, it is originally from France in the Bretagne (where it actually translates as “butter cake”). It’s a flaky pastry dough (think flaky like a croissant) that is smothered on top with a sugary butter and then baked until the sugary butter caramelizes.

The guy behind the counter insisted that even though the recipe is simple, people just come to Kouign Amann because they mess it up at home. Even if that is the case, Montreal is a long way from home and I’d like to dig into the flaky, buttery goodness again. I’ll be trying this recipe by David Lebovitz.

Patisserie Au Kouign Amann is located at 322 Avenue du Mont-Royal Est and is open Monday – Friday from 7am – 7pm and Saturday and Sunday from 7am – 6pm. 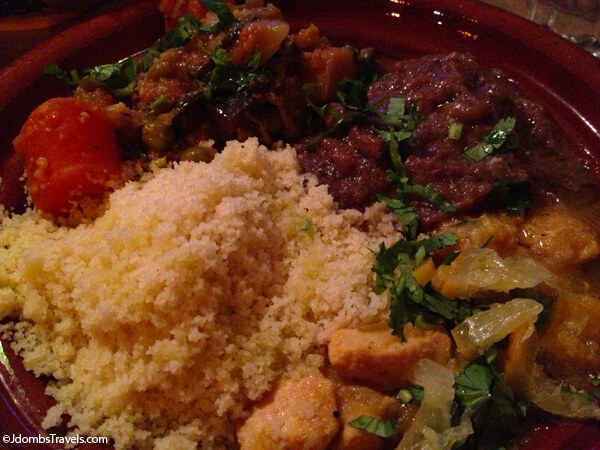 I had absolutely no idea what to expect when La Khaima appeared on my itinerary for Montreal. The website is only in French, but Google Translate told me I was headed to a North African restaurant in a nomad tent. In the middle of Montreal? Well, restaurant founder Atigh Ould did a fantastic job of transforming a building into a traditional nomadic tent from his home country Mauritania. It was stepping into another world as Heather and I ducked in out of the rain. Colorful carpets and blankets covered the walls and ceiling. Atigh himself brought a chalkboard over and explained the simple menu: lentil soup and a choice of chicken, beef, or lamb tagine. And if I wanted, he would make me a mix of all three.

A tagine is a rich stew and includes couscous and vegetables. The chicken, beef, and lamb were all fantastic but the lamb was definitely my favorite. We declined dessert but did enjoy two pots of Moroccan mint tea and Atigh snuck in a little dessert.

My only complaint was that La Khaima is BYOB, as in bring your own bottle of wine like many Chicago restaurants. A Malbec would have been fantastic with the lamb and no alcohol is served by the restaurant.

La Khaima is located at 142 Fairmount Ouest and is open nightly for dinner. Dinner is $25 CAD per person. 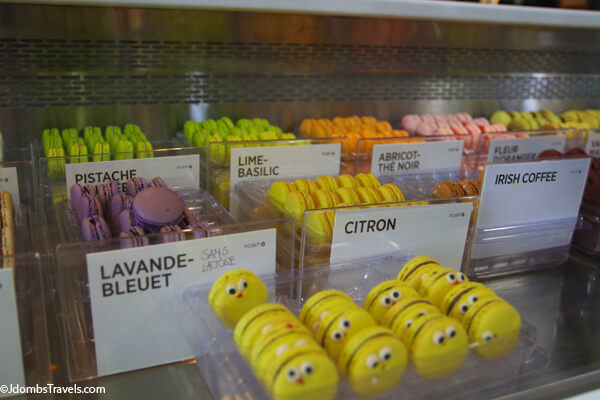 Macaroons at the Jean Talon Market

The indoor Jean Talon Market is a foodie heaven. One whole wing alone is dedicated to fresh fruits and vegetables. The aisles are lined with food carts and little shops selling literally everything…sausages and smoked meats, fresh fish, cheese, maple syrup, macaroons…you name it, I saw it! You could literally have an international feast while walking through the market. My favorite find there were definitely the googly-eyed and other assorted macaroons.

Thank you to Tourisme Montreal for hosting us during our time in Montreal. As always, all opinions (and decisions to eat tons and tons of amazing food) are entirely my own.