You are here: Home / Europe / Switzerland / The Sights of Geneva, Switzerland 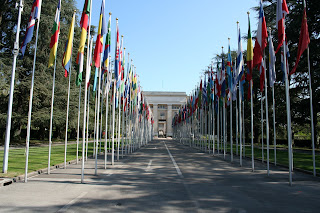 Geneva is known as the “Peace Capital” of the world and rightly so as it is the headquarters of the United Nations as well as where the Geneva Conventions were signed. Located where the Rhone River exits Lake Geneva, it is a compact metropolis with many sights to see. 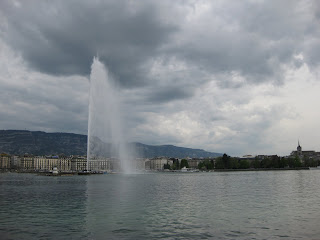 The Jet d’Eau, or water jet, is one of the city’s most famous landmarks. It is one of the largest fountains in the world and shoots water 450 feet into the air. The first Jet d’Eau was installed in 1886 at the Usine de la Coulouvrenière, a little bit further downstream from its present location and was moved to its present location in 1881 to commemorate the 600th anniversary of the Swiss Confederation. The jets were upgraded in 1951.

The famous flower clock has been a symbol of Geneva’s watch industry since 1955 and is located at the edge of the Jardin Anglais. The seconds hand of the flower clock is the largest in the world at over 2.5 meters long. It is composed of eight concentric circles, the colors of which vary with the seasons and the plants which make up the display. A new design of over 6500 flowers is painstakingly created every season. 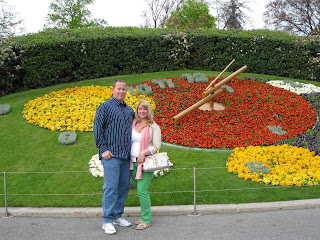 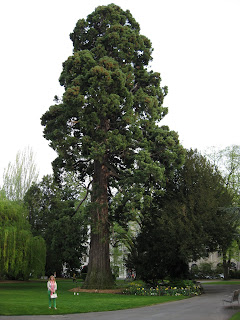 The Jardin Anglais is located below the Vieille Ville (Geneva’s Old Town) and was created in 1854 on the ancient harbor. The park not only contains the famous flower clock, but also a carved Sequoia stump, a large bronze fountain from 1862, and a Giant Sequoia tree. Giant Sequoias are found naturally only in California and grow to an height of 165 – 280 feet. The first Giant Sequoia to be brought into cultivation in Europe was in 1853. Several can be found throughout England, Belgium, the Netherlands, Luxembourg, Italy, and Switzerland. 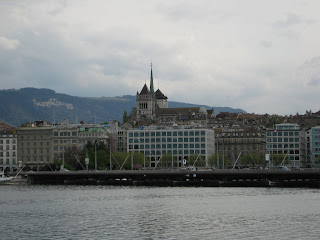 Rue St-Léger curls up into the split-level Place du Bourg-de-Four, a marketplace since Medieval times that was probably built over the Roman forum. We enjoyed a delicious dinner of fine French cuisine at the Au Pied de Cochon, which overlooked the the 18th century facade of the Palais de Justice. (I highly recommend the candied lamb shank with saffron and truffle mashed potatoes!) The site of St. Pierre Cathedral has been occupied at least since the 4th century. Excavations have revealed the remains of two 4th-century Christian sanctuaries, mosaic floors from the late Roman Empire, portions of three early churches, and an 11th-century crypt beneath the present cathedral. The exterior of Geneva’s cathedral exhibits a confusion of styles — it’s a squat Romanesque church with a columned Neoclassical facade, the two square towers on the east end don’t match, and there is a bright green spire (from the late 1800s) rising above everything else. 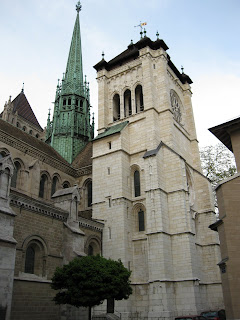 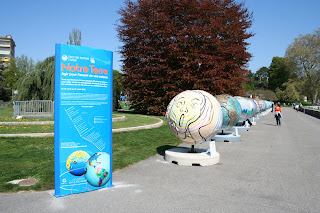 A series of globes is on display lakeside from April until August. Cool Globes: Hot Ideas for a Cooler Planet, is a public art exhibition designed to raise awareness of solutions to climate change.  Cool Globes grew out of a commitment at the Clinton Global Initiative in 2005, and was incorporated as a non-profit organization in 2006. Cool Globes premiered in Chicago and went on tour across the US from Washington DC to San Francisco, San Diego, Sundance, Los Angeles, and Houston.  In the fall of 2009, Cool Globes opened the first international exhibit in Copenhagen. 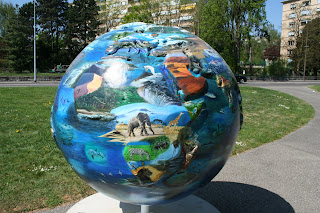 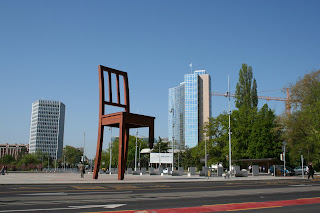 The Broken Chair, located across the street from the Palace of Nation, symbolizes opposition to land mines and cluster bombs, and acts as a reminder to politicians and others visiting Geneva. It is constructed of 5.5 tons of wood and stands 39 feet high. 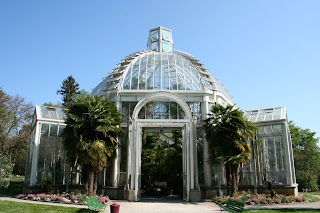 The Botanical Gardens consist of a collection of 16,000 plant species from all over the world. This truly living museum is divided into several sections: an arboretum, the rock garden and banks of protected plants, medicinal and useful plants, greenhouses, horticultural plants including a “garden of scent and touch”, an animal park devoted to conservation is located between the United Nations and the lake.