You are here: Home / Europe / Iceland / How to Sample Iceland’s Most Famous Food: The Hot Dog The hot dog is to Iceland what pizza is to Italy. If your mind jumped to the ballpark frank fished out of steamy water and slapped on a bun with some ketchup and mustard, think again. The Icelandic hot dog, officially called a pylsa, is – dare I say – the world’s best hot dog. Just like you can’t visit Italy without trying the Neapolitan pizza, you can’t visit Iceland without trying a pylsa. 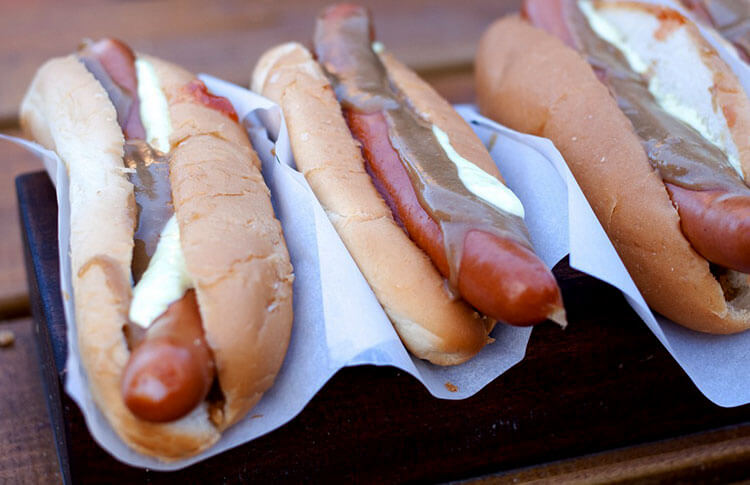 Icelandic hot dogs are the best hot dogs in the world

What’s in an Icelandic Hot Dog?

My parents, who never wanted me to have hot dogs growing up, used to joke that hot dogs were the tails of wiener dogs. In the United States, it might truly be anyone’s guess what meat a hot dog is made from. But in Iceland, where sheep double the population of humans, the hot dogs themselves are made from mostly lamb.

And if you’re in to that whole free range thing, rest assured that these sheep live in one of the most pristine environments on earth. Their owners set them free to roam the highlands in the early spring, where they fatten up eating grass and berries until the famous sheep round-ups in the fall.

The hot dogs are made from mostly lamb, with the remainder of the meat made up of beef and pork. In Iceland, cows and pigs are raised on very loving farms where they have some of the most awesome views to look at as they graze. Trust me, if I were a cow I’d be a cow in Iceland!

The meat is stuffed in a natural casing, then the hot dogs are cooked and smoked.

What’s on an Icelandic Hot Dog?

You won’t find the crazy toppings like mac and cheese that seem to be popping up at chic gourmet hot dog restaurants these days. But a true Icelandic hot dog would fit right in with those gourmet dogs.

It’s a toasted bun with chopped raw onions and locally made ketchup made from apples on the bottom. The mostly lamb hot dog is then nestled on the bed of raw onions and ketchup and topped with french fried onions, a slightly sweet brown mustard called Pylsusinnep, and a Danish remoulade made with mayonnaise, capers, mustard and herbs.

How To Order an Icelandic Hot Dog

You’ll want to order your pylsa just as the Icelanders do: “eina með öllu” (pronounced AYN-ah-med-UTL-lou). It basically means “one with the works”.

No worries if you can’t pronounce it. All Icelanders speak English, but you’ll surely get your pylsa with a hearty laugh and a smile at your attempt to pronounce anything Icelandic.

Even if you think you won’t like all those toppings, at least try a pylsa with everything once. It’s oh-so-worth potentially dripping some of those toppings on you.

And don’t forget a Coca-Cola. Icelanders drink more Coca-Cola per capita than any other country and like a sommelier, hot dog vendors will tell you the Coca-Cola brings out all the flavors. 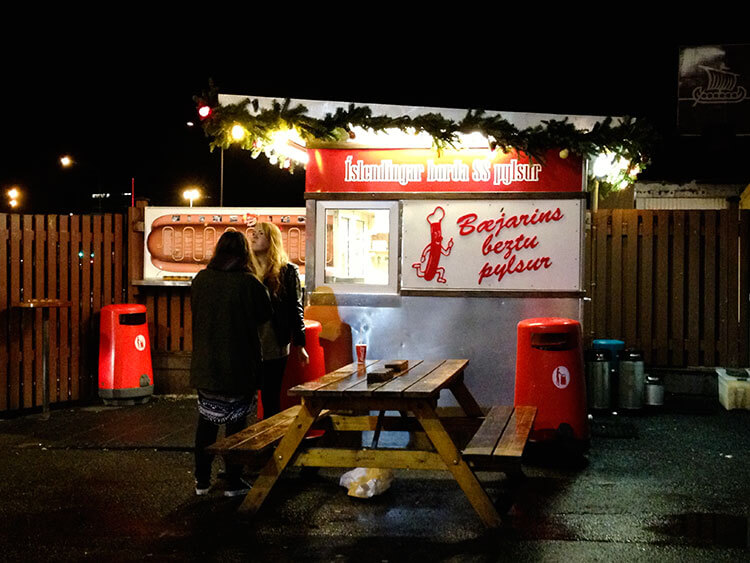 Bæjarins Beztu Pylsur has been a staple for Icelanders since 1937

Where to Get an Icelandic Hot Dog

Remember when I said that the Icelandic hot dog is basically the national dish of Iceland? That means you can find pylsa everywhere. And I mean everywhere.

From the corner store to the gas station, it’s nearly impossible not to stumble upon an Icelandic hot dog. You can even pick up packages of the mostly lamb dogs and bottles of Pylsusinnep and remoulade at the airport to assemble your very own Icelandic hot dogs at home.

It opened in 1937 and has been in continuous operation by the same family since. When it first opened, it was located on Austurstræt but moved to Tryggvagata across from the Harpa Concert Hall in the 1960s.

It’s little more than a red shack with a few picnic tables outside, but it’s unassuming look hardly keeps anyone away. It’s pretty hard to miss; just look for the line usually inching around the block, especially if you’re looking for a late night snack after the bars close.

Most of the population of Iceland has eaten a hot dog from Baejarins Beztu Pylsur. Celebrities like Bill Clinton and James Hetfield of Metallica have tried a pysla there. You can even watch Anthony Bourdain partake in Iceland’s national dish during the first season of No Reservations.

How Much does an Icelandic Hot Dog Cost?

Food in Iceland can be expensive. It’s probably the thing you’ll spend the most on when visiting the country. But an Icelandic hot dog will set you back just 280 ISK, about $2.50 US. They’re so inexpensive that you can definitely have two.

How to Make an Icelandic Hot Dog at Home

Did you develop an addiction to the mostly lamb hot dogs topped with three sauces and those deliciously fried onions like I did? I already mentioned that you can pick some hot dogs and the sauces up at the duty free shop in Keflavik International Airport.

But if you can’t make it to Iceland just yet and you’re dying to try the pysla that I’ve been raving about, you can order all the fixings online from Nammi.is to make your very own Icelandic hot dogs at home. Just don’t forget to put the raw onions and ketchup on the bottom!