You are here: Home / Europe / Iceland / Journey to the Center of the Earth Inside a Volcano 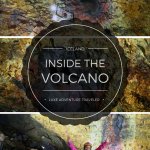 Are you as fascinated by volcanoes as we are? Have you ever wondered what it looks like inside of a volcano? While it’s impossible to know what an active volcano looks like inside because you – and anything you try to put down inside it – would be burned up in seconds, you can descend 120 meters in to the magma chamber of the dormant Thrihnukagigur volcano in Iceland with Inside the Volcano.

And Thrihnukagigur is the only place on earth you can actually go inside a volcano. 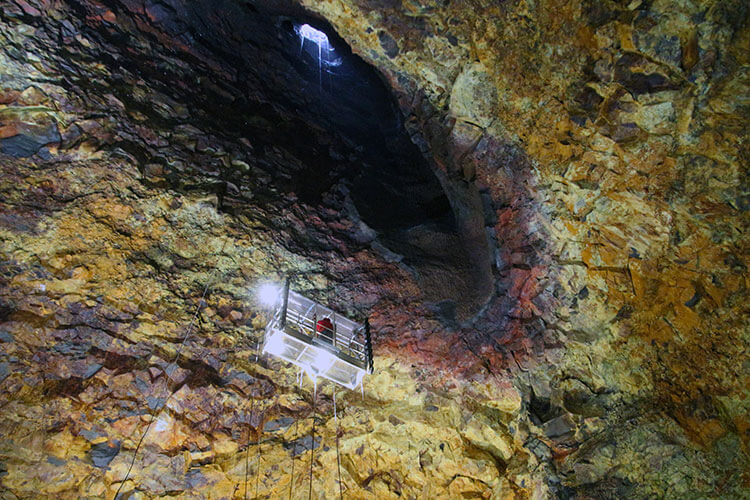 Located about 15 miles from Iceland’s capital, Reykjavik, Thrihnukagigur is a dormant volcano that last erupted over 4000 years ago. The unpronounceable Thrihnukagigur, which means Three Peaks Crater, is credited with helping to create the north Atlantic island we know as Iceland when it erupted some 4000 years ago.

It was discovered and named by Árni B. Stefánsson, a doctor and cave enthusiast from Reykjavik, and he was the very first to descend down in to the chamber in 1974. It’s also thanks to him and his case for making such a phenomenon open to the public that the Inside the Volcano tour Iceland was born.

Thrihnukagigur stands 550 meters above sea level and is a prominent landmark in the skyline of Bláfjöll Nature Reserve.

The most north-easterly of the three peaks is a cinder cone and it stands 35 meters (100 feet) higher than the rest of its surroundings. Looking at it, you’d never think the tiny 4×4 meter (12×12 feet) opening leads to the incredible bottle shaped magma chamber that it does. 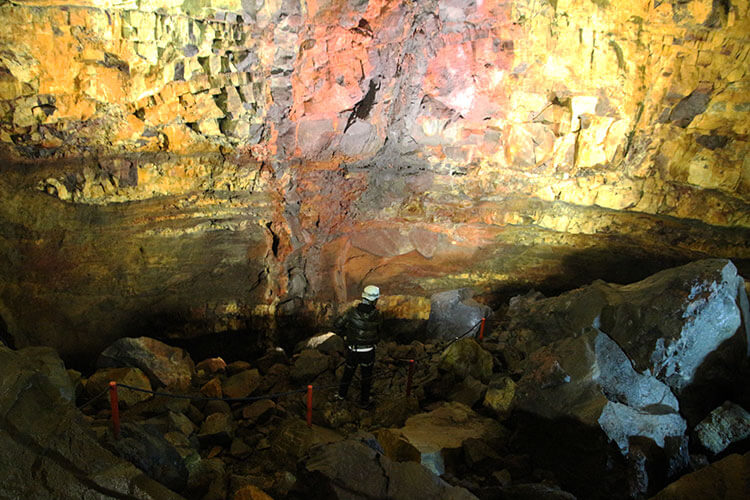 The Statue of Liberty would fit inside with room to spare

The chamber is massive at 120 meters (394 feet) deep and 50×70 meters (160×200 feet) wide on the ground at the bottom. To put all those numbers in to perspective, the Statue of Liberty would fit inside with room to spare.

Volcanologists consider Thrihnukagigur unique and, quite possibly, one of a kind. Typically the magma chamber is sealed after an eruption by the cold, hard lava left behind. But with Thrihnukagigur, it’s like someone pulled the plug of a drain and the magma just ran out. 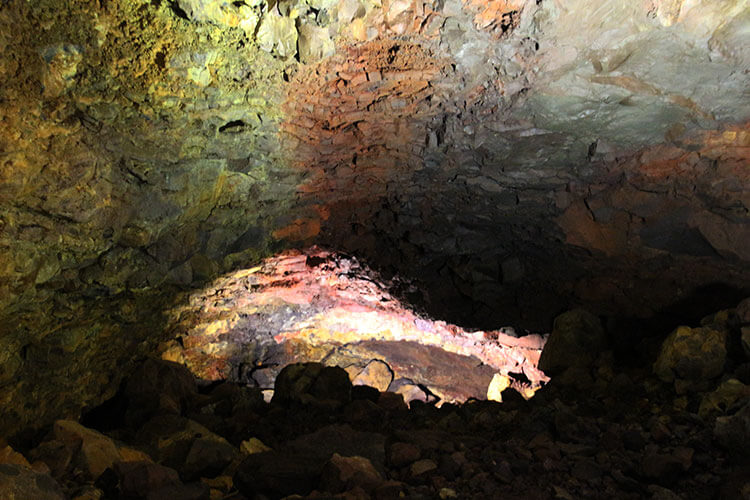 We’re left behind with the massive magma chamber, which even continues with volcanic passages running down to a depth of 200 meters (700 feet), that has given scientists a unique opportunity to study “the plumbing system” of an active volcano like has never been done before. And lucky for us common folk, Thrihnukagigur is recognized to be special enough to give the public the opportunity to see it for ourselves. Going inside is definitely the ultimate experience when it comes to Iceland volcano tourism. 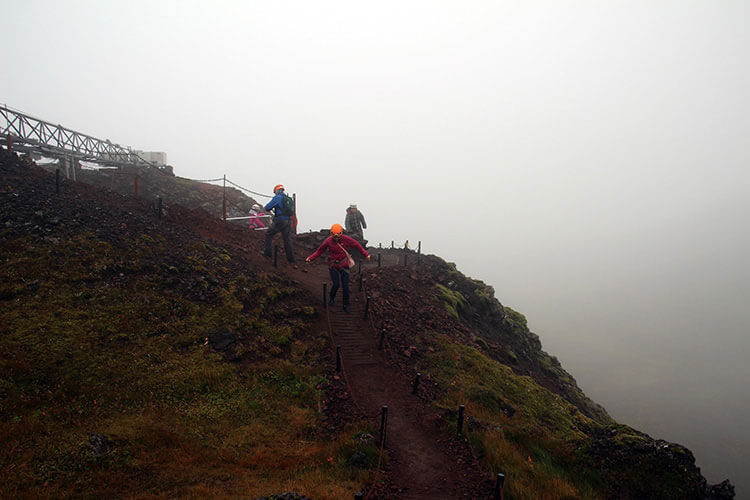 Fog, rain and high winds just added to the adventure

Thrihnukagigur is just 15 miles from Reykjavik, but it’s technically located in the Highlands and is only accessible for a short period from mid-May through mid-October. And even in those summer months, the Bláfjöll Nature Reserve can feel worlds away from Reykjavik.

It’s only possible to descend in to Thrihnukagigur on the Inside the Volcano tour because of safety and security reasons. You can either be picked up at your hotel in Reykjavik, or you can opt to arrive at the mountain hut in the Bláfjöll Nature Reserve on your own though. There’s a paved road leading to the mountain hut, though the weather can be foggy, rainy and extremely windy even in the height of summer – and we experienced all of it as we we drove to the Inside the Volcano meeting point.

Early and as the wind rocked our 4×4 car rental, we wondered if we’d still be able to go on the tour. Having to hold your car door so it literally doesn’t blow off, sideways rain and wind blasting you on a trek across a lava field might sound like an adventure to most of us, but that’s pretty much a normal occurrence to the Icelandic.

Seemingly unfazed by the weather, the guides arrived with the rest of the group that was picked up from Reykjavik. I dug a few extra layers out of my bag, zipped up and braced myself for the wind.

Everyone was given 66°North full length rain coats and I chose a larger size so I could fit the camera bag underneath too. And with that, we set off for a 3 kilometer Thrihnukagigur volcano hike across a lava field to the Base Camp, where we’d change to harnesses and helmets.

The wind was blasting us that day at 30mph, and thankfully on the trek out to Base Camp it was at our backs. The group trekked together in a single file line with one of our guides leading the way and another bringing up the rear. With the wind helping to move us along, it felt like it took no time at all to reach Base Camp.

There, we could warm up with hot tea or coffee while we received a safety briefing about being lowered inside the volcano. We were divided up in to small groups of six, and since we were headed straight to the airport after our tour, we were in the first group.

We made a short, but windy five minute trek up to the opening of the volcano. There’s ropes and chains to hold on to, which are absolutely necessary on a day like the day we did the tour. 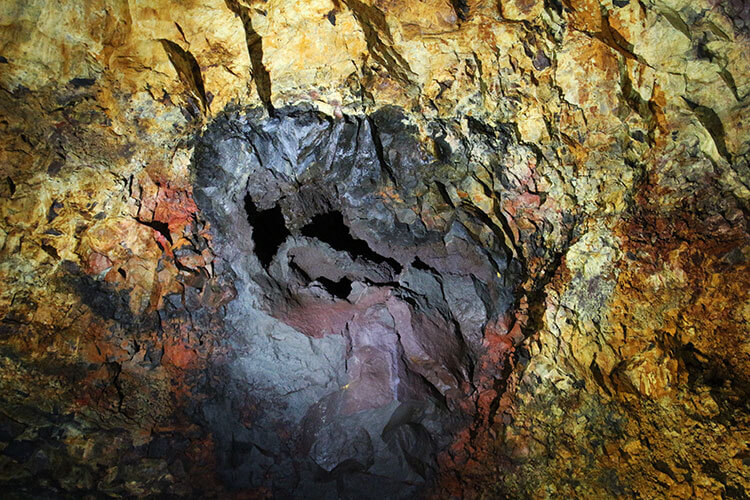 This area of the chamber had holes burned in from the hot magma. We think it looks like a face.

It takes about six minutes for an open basket elevator that looks a lot like a window washer’s lift to slowly descend the 120 meters down in to the magma chamber. The harnesses are all clipped on to the basket, so there’s no worries and you can have an up close look at the colors left behind from the hot magma that was once here. 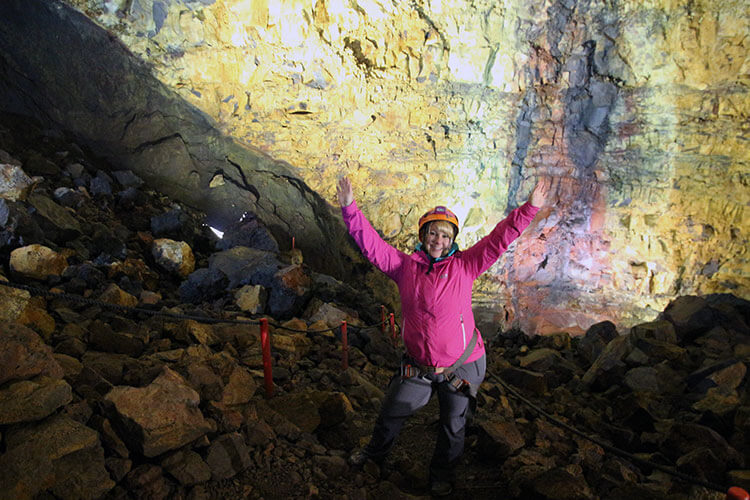 Once on the floor of the magma chamber, the guides give a brief talk about the chamber and answer any questions. You’re then free to explore the chamber on your own for about 30 minutes. You just have to stay within a roped path that makes a loop around the entire chamber floor. It’s easy to get off the path, so be sure and pay close attention. The ropes are there to help protect the fragile environment and being respectful of that helps to keep volcano tours in Iceland like this one open to the public. 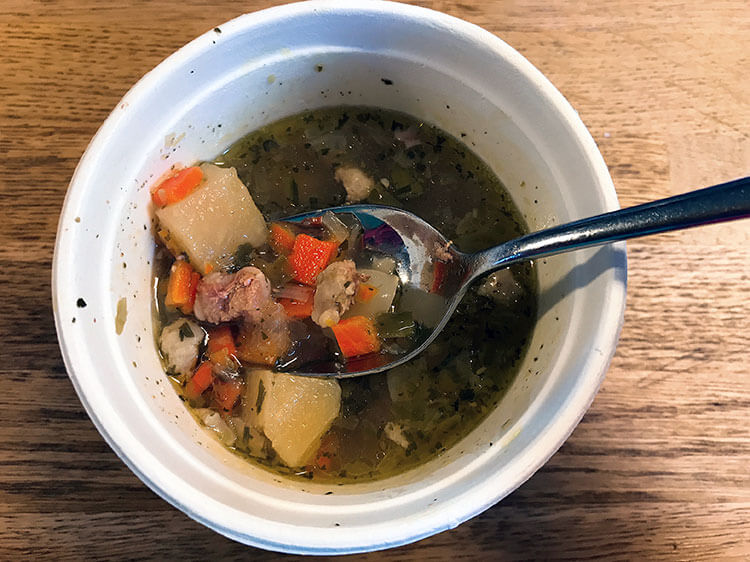 After returning to Base Camp, more hot tea or coffee and either traditional Icelandic lamb soup or a vegetarian version awaits. And after the wind blasted trek and being a little wet and cold, that soup really hit the spot.

If you drove to the mountain hut on your own, you can make the trek back across the lava field at any time. We did with three others that had also driven on their own instead of waiting for the rest of the group.

It takes from 5 – 6 hours for the Inside the Volcano Iceland tour, with a 6 kilometer round trip hike to Thrihnukagigur. Booking the very first tour of the day, we had plenty of time for the tour before heading to the airport for a late afternoon flight.

While the price tag for this adventure is on the steep side, it’s absolutely worth it for an experience that will leave you in awe of our planet and the forces of nature. None of the other volcano tours in Iceland offer anything like it.

Getting ThereBooking
Pick-up from Reykjavik hotels in included in the tour. You can also meet at the mountain hut in Bláfjöll Nature Reserve using this map to arrive at the Inside the Volcano meeting point on your own.
The Iceland Inside the Volcano tour operates from May 15 – October 15. Children from ages 12 and older welcome.

You must be able to walk 3 kilometers (about 2 miles) each way over uneven, lava rock strewn ground. Wear waterproof outdoor clothing and good waterproof trekking shoes for this Iceland volcano tour.

Our tour was provided by Inside the Volcano in order to bring you this story. However, Luxe Adventure Traveler maintains full editorial control of the content published on this site. As always, all thoughts, opinions, and enthusiasm for travel are entirely our own.