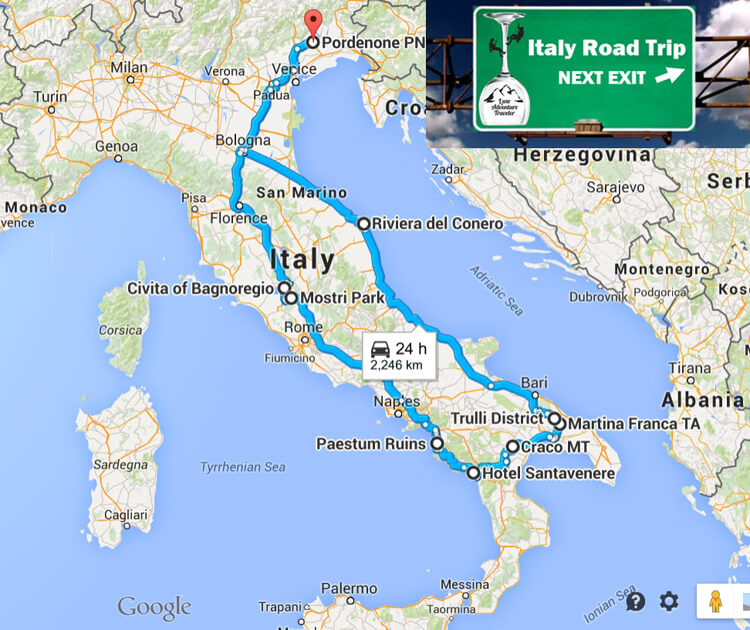 The first stop on my Italy road trip takes me to Viterbo, in Lazio

Rome. Been there. Florence. Done that. More than a couple of times, in fact. While I love Italy’s most visited cities, they can feel like overcrowded theme parks on the Fourth of July. I tossed out my Italy guide books, well all of my guide books, a long time ago and like to discover things on my own. I plotted out a list of places I was just dying to see, all of course only accessible by car, and that map turned into an epic Italy off-the-beaten-path road trip. With Tim still away, I grabbed one of the most fun people I know and Leah Travels and I set out to drive Italy’s boot.

Living in the north and having visited a lot of Italy within a four hour radius of my house, our first stop was in the province of Viterbo, part of the Lazio region about an hour north of Rome. 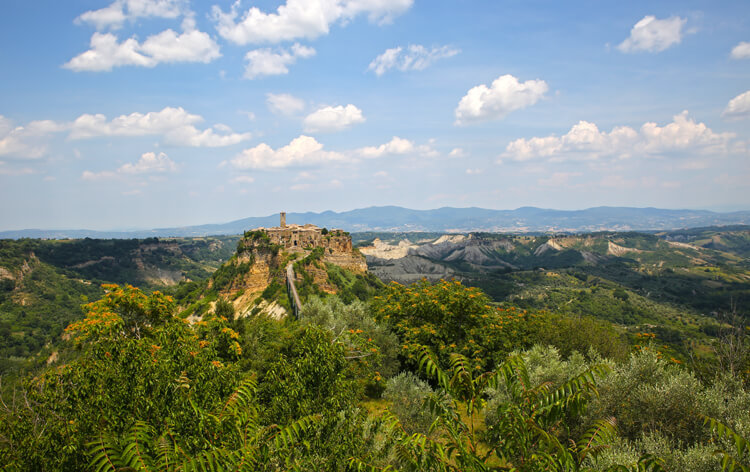 Known as the “Dying Town” because it teeters on a crumbling volcanic rock whose sides continue to erode and fall off, Civita di Bagnoregio has a population of just 15 year round determined citizens that keep the ancient town alive. Accessible only by a 1-kilometer long stone foot bridge that connects the hilltop town with its satellite town of Bagnoregio, it has managed to escape the destruction of the long list of intrusions and two World Wars. 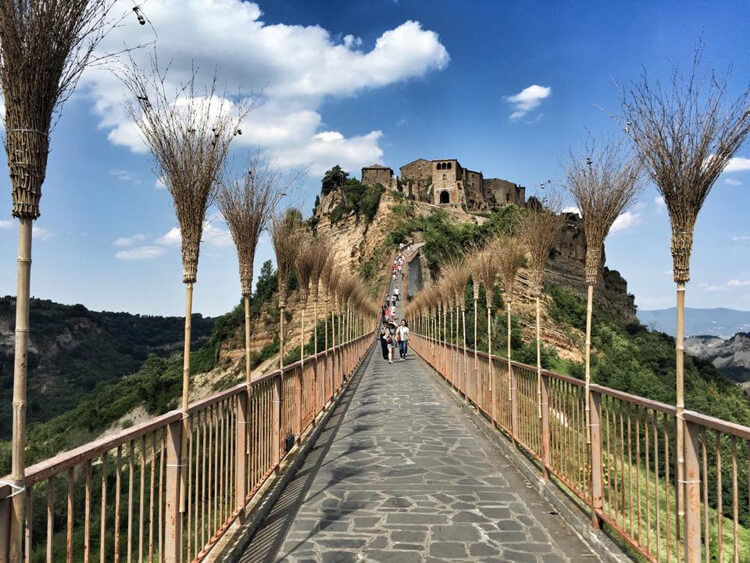 The first outlook as you begin the walk to the town is enough to leave you breathless, and the bridge itself is magical. A series of bamboo brooms along the bridge jingle from the wind tickling the bells attached to them.

There’s only one way in or out, and that’s through the Santa Maria gate which was originally cut by the Etruscans 2,500 years ago and decorated with a Romanesque arch in the 12th century. Once inside, it’s just Italy. Civita di Bagnoregio is the attraction. 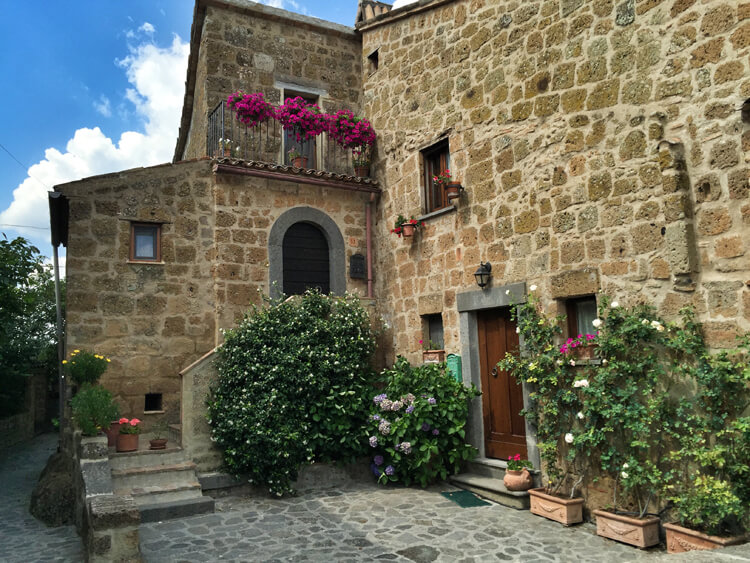 There’s beautiful little streets where flowers cascade from the windowsills of stone houses, shops seemingly hidden away on narrow calle, and doorways that appear to open to nothing but more spectacular views of the valley. The buildings that were once there long ago fell away as the volcanic rock that supported them crumbled. 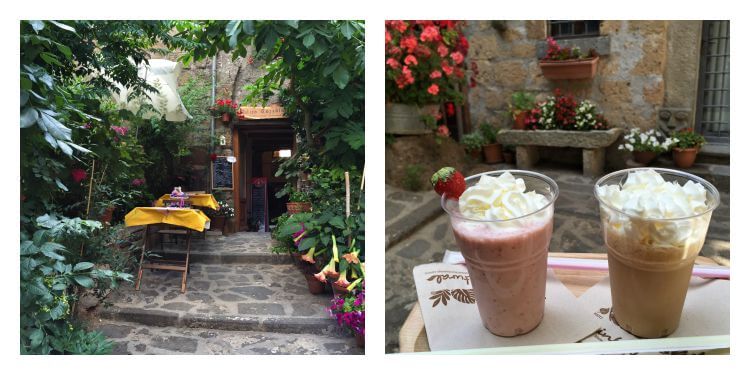 Leah and I walked the entire town end to end, poking our heads into this store or that. We sat for a bit at a cute cafe just off the main piazza sipping frappes, just what we need on such a hot day. 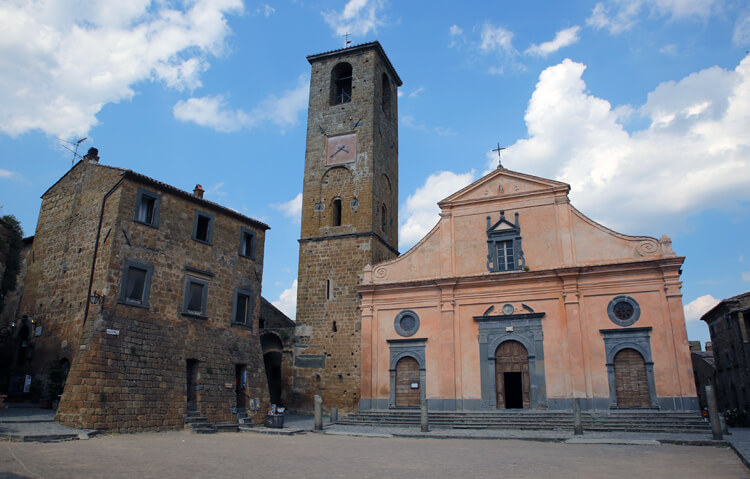 There’s more cats than people and there isn’t much to do in Civita di Bagnoregio but to wander and talk with the handful of locals running the handful of shops, cafes and restaurants. But this is a special place that you should go and see, because sadly one day it just won’t exist as nature continues to erode it away.

When arriving to Civita di Bagnoregio, pass the first car park and continue. You can park in the car park at the entrance to the foot bridge. Parking is metered, so be sure to have coins for the ticket machine. There is a €3 entry fee (cash only) that you pay just before the bridge. 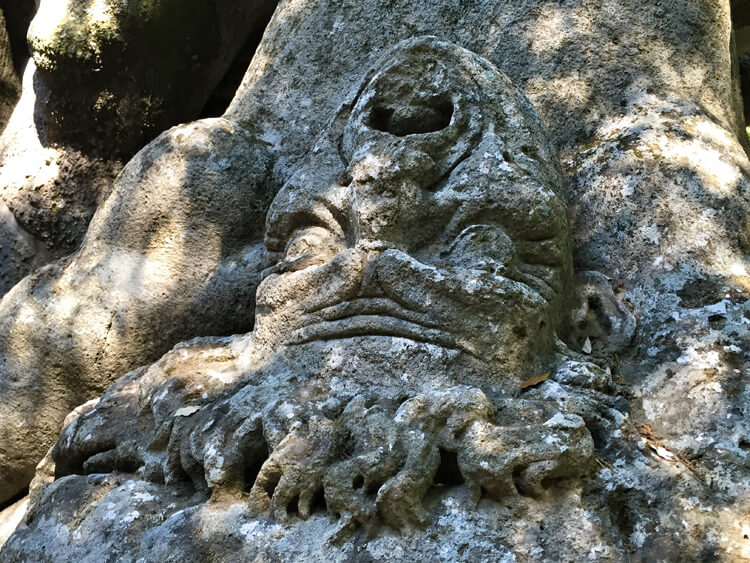 Leah was such a great sport just packing a bag and leaving the itinerary up to me. “So what exactly is this monster park?”, she asked on our way there. I wasn’t entirely sure myself since I couldn’t find much information about it. I’d actually come across it in a museum and there was a short documentary about the discovery of it. Larger than life stone sculptures of elephants and goulish faces were covered by years and years of overgrowth in the forest about an hour north of Rome. “Oh good,” Leah told me with a grin, “I thought we were going to a monster truck rally.”

The Parco dei Mostri di Bomarzo was commissioned by Price Pier Francesco Orsini to vent his broken heart after the death of his wife, Giulia Farnese in the 16th century. The Prince hired architech Pirro Ligorio, famous for finishing Saint Peter’s Basilica in Rome after the death of Michelangelo and for Villa d’Este in Tivoli.

The garden fell in to disrepair for a couple hundred years until it was rediscovered and restored in the 1970s. The garden is still privately owned, but the family has opened it up to the public for visits.

Driving there you wonder if you’re headed in the right direction, but a few well-placed signs ensure that there is something in the forest you’re descending in to. The map provided with each of the 35 larger-than-life statues is a little hard to follow and slightly deceptive. But wandering through the strategically left overgrowth is half the fun. Just be sure to spray yourself with mosquito repellent before you go. 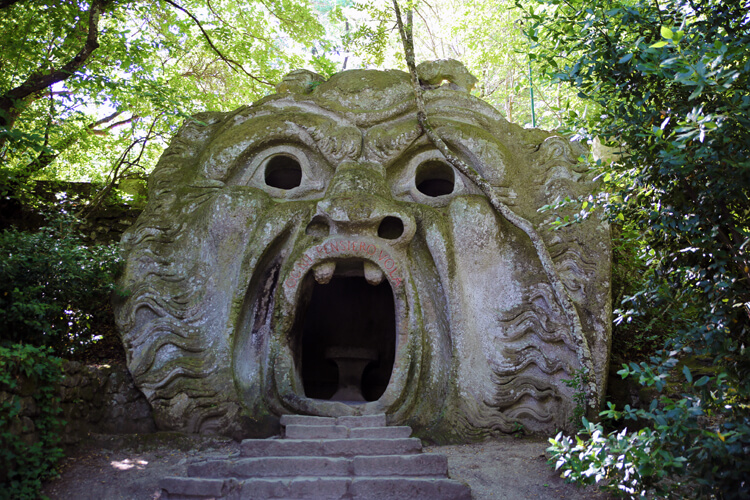 A favorite of most visitors was also Leah and I’s favorite sculpture. Built right into the bedrock is L’Orco, also the name of one of the kings of the underworld. There’s an inscription around the ogre’s lips that reads: Ogni pensier vola. Meaning all reason departs, it can be attributed as a part of Dante’s inscription over the mouth of hell, “Abandon all reason ye who here enter.” Fitting since you can indeed enter L’Orco’s mouth. There’s a small cavern inside just big enough for one stone picnic table. Who dare to have lunch here? 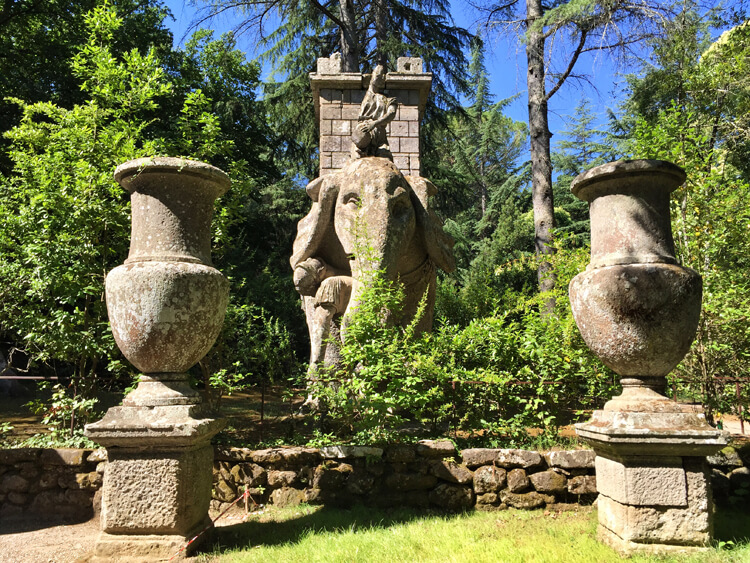 Hannibal’s elephant holds a dead Roman soldier in his trunk

Hannibal’s war elephants reminded me of being in Northern Thailand with the vines and growth around them. The bears and the giant tortoise were other favorites.

We couldn’t help but photograph Lotta di Giganti (the wrestling giants) from every angle. The sculpture represents the battle between good and evil with Hercules, protector of the weak, standing over Caucus who stole food from the poor.

You could spend a few hours studying every detail of the monstrous sculptures and pondering the Prince’s broken heart. We were comfortably able to see the entire park in about an hour’s time, so if you only have a bit Bomarzo is still worth a stop.

10 Things to Know Before Driving in Italy 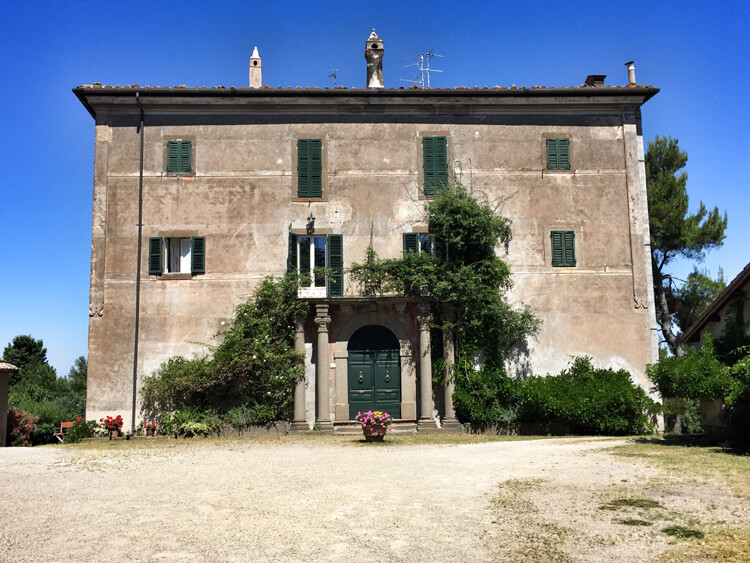 Where to Stay in Viterbo

Built in the 18th century, Villa Farinella is a beautiful stately home that was built by the architect Prada. Yes, the very Prada family that today produces some of the finest in Italian fashion. Today it’s a lovely bed and breakfast located perfectly for exploring Viterbo, Bomarzo and Civita di Bagnoregio.

The villa has three rooms with en-suite bathrooms and guests share two charming sitting rooms which are also used for breakfast, the outdoor garden and, in summer, an on-site swimming pool. 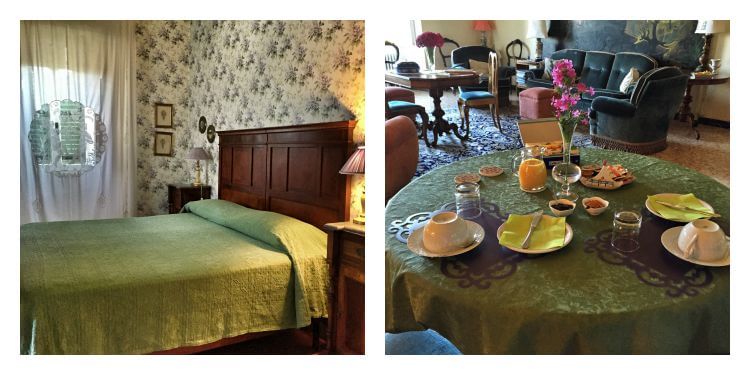 The Lilac Room and the breakfast room

We stayed just one night in the Lilac Room and had a lovely, yet typical, Italian breakfast with meats, cheeses, croissants, juice, coffee and tea. There is wifi; however, it was not working until the morning we checked out due to a problem. Also note that the villa does not have air conditioning, though we weren’t terribly uncomfortable even in a heat wave. 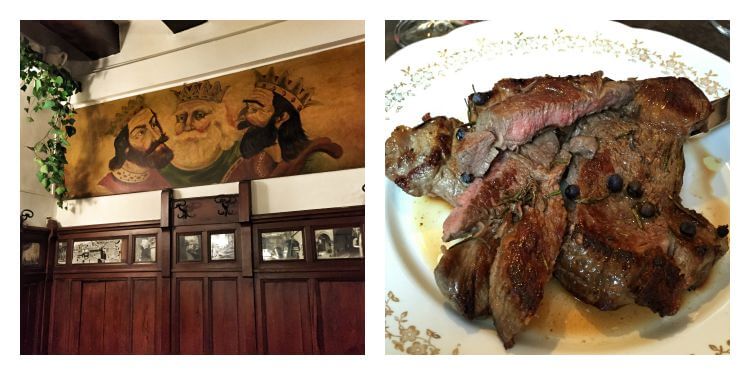 Where to Eat in Viterbo

We didn’t find the walled town of Viterbo anything particularly special, but Ristorante Tre Re is worth venturing into town for dinner. The restaurant has been a Viterbo establishment since 1622. I highly recommend the ravioli and beef tagliata with juniper berries. Delicious!

Ristorante Tre Re is located at Via Macel Gattesco 3 in the historic center of Viterbo. It is closed on Thursdays.

Our car rental was provided by Carrentals.co.uk in order to bring you this story. However, Luxe Adventure Traveler maintains full editorial control of the content published on this site. As always, all thoughts, opinions, and enthusiasm for travel are entirely our own.