You are here: Home / Middle East / Jordan / Jerash: The Most Complete and Preserved City in the Eastern Roman Empire

Jerash, or Gerasa in ancient times, is the most complete and preserved city in the Eastern Roman Empire. The city was inhabited up until the middle of the 8th century AD when a major earthquake destroyed many of the buildings and the city’s water supply system, The people were forced to abandon the city. The ruins were eventually buried under mounds of sand for over eight decades.
In 1806 Ulrich Jasper Seetzen, a German traveler, came upon ruins that he thought might be those of an ancient city buried under centuries of sand. It was in 1925 that excavations began on the site and as layer upon layer of civilization were revealed, a well-preserved Greco-Roman city began to emerge. 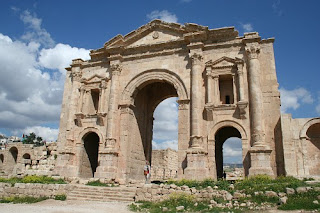 The visit to Jerash begins at Hadrian’s Arch. The Emperor Hadrian visited Jerash in AD 129-130 and the triumphal arch was built to celebrate his visit, which ushered in a Golden Age of prosperity for the city of ancient Gerasa. A remarkable Latin inscription records a religious dedication set up by members of the imperial mounted bodyguard “wintering” there. 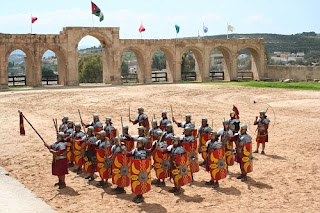 The hippodrome, or stadium for chariot racing, has ten starting gates as opposed to the usual twelve, which have been re-assembled from the rubble with other missing stones quarried and rebuilt. The seating area was four meters deep with sixteen rows of seats. The seats accommodated 15,000 spectators. Today, spectators can take in forty-five legionaries in full armour in a display of Roman Army drill and battle tactics, ten gladiators fighting “to the death” and several Roman chariots competing in a classical seven lap race around the ancient hippodrome. 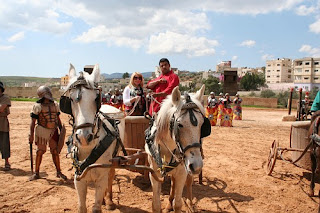 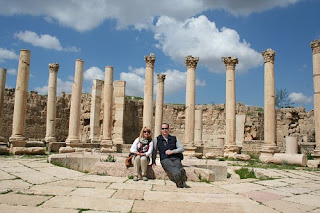 As you stroll along the ancient city walls and through the South Gate, the Oval Plaza opens up in front of you. The spacious plaza measures 90 x 80 meters and is surrounded by a broad sidewalk and a colonnade of 1st century Ionic columns. There are 2 altars in the middle, and a fountain was added in the 7th century AD. 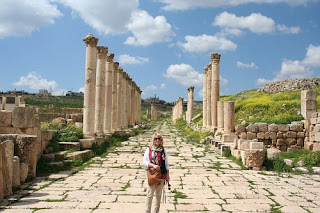 From the Oval Plaza, you can stroll down the Cardo just as the Greco-Romans did in ancient times. Still paved with the original stones – the ruts worn by chariot wheels still visible – the 800 meter Cardo was the architectural spine and focal point of Gerasa. On either side was a broad sidewalk with shops, which can still be clearly seen. The intersection of the Cardo with the first cross street, the South Decumanus, was marked by four still visible pedestals, which supported columns and probably a pyramidal structure.

The Nymphaeum, or ornamental fountain, was constructed in 191 AD and dedicated to the Nymphs. Such fountains were common in Roman cities and provided a refreshing focal point for the city. The Nymphaeum was originally embellished with marble facings on the lower level and painted plaster on the upper level, topped with a half-dome roof.Water cascaded through seven carved lions’ heads into small basins on the sidewalk and overflowed from there through drains into the underground sewer system. 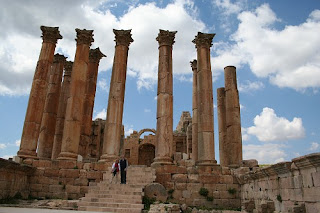 The procession to the Temple of Artemis originally started across the river in the part of Gerasa now covered by modern Jerash. Crossing the Cardo, worshipers approached the impressive entrance to the processional way leading up to the Temple of Artemis. Its massive columns and a carved portico were flanked by two-story shops. The monumental staircase, originally enclosed by high walls, leads up to a U-shaped terrace where an open-air altar was built and is referred to as the stairway to heaven. Artemis, daughter of Zeus and sister of Apollo, was the patron goddess of Gerasa. This temple was a place of sacrifice dedicated to Artemis and built in 150 AD. The temple’s Corinthian columns soar impressively from the hilltop site; 11 of the 12 front columns are still standing. 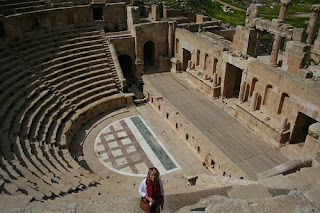 The North Theater was built in 165 AD. In front is a colonnaded plaza where a staircase led up to the entrance. The theater originally had only 14 rows of seats and was used as a the city council chamber; the names of the tribes represented in the council are inscribed in Greek on some of the seats, along with those of several gods. In 235 AD, the theater was doubled in size to its present capacity of 1600. Two vaulted passages formed the entrance to the orchestra, and spectators entered through passages between the upper rows of seats.

Another theater, known as the South Theater, seats more than 3000 spectators and was built during the reign of Emperor Domitian between 90-92 AD. The first level of the ornate stage, originally two-stories has been reconstructed and is still used today. We were welcomed with a musical performance during our visit. For those who wish to climb more steps, the top row of seats affords an excellent view of the Jerash ruins. 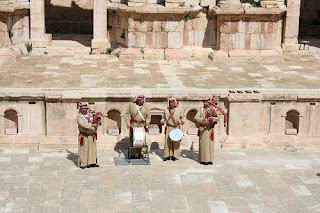