The Friuli Venezia Giulia is a land of ancient wine vocation, where the production takes place seamlessly of the Colli Orientali del Friuli and Collio, which give the best white wines of the peninsula. Starting with the composition of its terrain, Friuli is a region perfect for grape-growing. The lower plains of Collio, the area where many of Italy’s finest white wines are made, were once entirely submerged beneath the sea. Over the centuries, the rising seabed and the accumulation of sand and debris resulted in the formation of a soil rich in marl and sandstone, and thus the ideal habitat for the cultivation of vines.

The green and sunny hillside of Collio is famous for the production of Pinot Grigio, Tocai Friulano, Ribolla Gialla, and Collio Bianco. Established approximately 40 years ago, Collio’s “wine and cherry road” was the very first Italian wine road. The road snakes its way among the vineyards, passing through the little towns of San Floriano, Capriva del Friuli, Cormons and Dolegna del Collio. 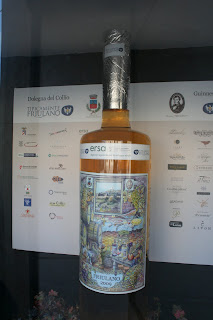 Appropriately, Dolegna del Collio, known as La Citta del Vino (The City of Wine) has created world’s largest bottle of wine. The bottle, at 2.6 meters (8 ft 6.36 in) tall, holds 510 liters of 2009 vintages from 30 of the region’s best wineries. The bottle was entered in the Guinness Book of World Records on October 23, 2010 and stands on display in Dolegna del Collio’s town square.