You are here: Home / Europe / France / Making Macarons in Paris

Macarons are one of my favorite things in the world. There’s just something about the colorful meringue cookies with luscious fillings like black currant or strawberry sandwiched between them that I simply can’t resist. I’m hardly ever in France for more than a few hours before I have a little bag of macarons stashed in my purse and there’s even less chance of those macarons lasting more than a few hours. Obviously I couldn’t resist when Cook’n with Class invited me to learn how to make my very own. Making macarons in Paris had been on my bucket list.

Why Paris? Though the origin of the macaron is debated, there are records of Catherine de’ Medici’s pastry chefs bringing the macarone (Italian meringue) to France with them in 1533 when she married Henry II. But the double-decker jam or ganache filled macaron is indisputably accredited to Pierre Desfontaines of the pâtisserie Ladurée in the early 20th century.

As I donned an apron and gathered with my four other classmates around the table, Chef Constance told us that we’d be making four different kinds of macarons: raspberry and rose, salted caramel, mint chocolate ganache and passion fruit infused chocolate ganache. We started with the easy part – the fillings. Melting chocolate for the ganache

I remember unwrapping a bowl full of individually wrapped Brach’s caramels that my mom and I would melt in the microwave when we baked Christmas cookies. There would be none of that in my macaron making lesson. We made salted caramel from scratch, as the French do. We also chopped up and melted chocolate and then infused the two batches with mint leaves and passion fruit juice to make the ganaches. And we made home made raspberry jam.

I was thrilled to get to taste each. Isn’t licking the bowl the best part of baking?

With the fillings made and cooling on plates over on the counter, it was time to get down to the business of making the delicate little macaron shells. Chef Constance explained that the ingredients must all be precisely measured or the shells might not puff up properly. So we measured everything out with a kitchen scale.

One of the ingredients in the cookies is almond flour and the oil in it causes it to clump. As Chef Constance handed me a shift and set me to work shifting the almond flour not once, but twice, I quickly realized why a single macaron at Ladurée costs nearly €2. This part was, admittedly, my least favorite part of making macarons. Making sure the temperature is just right with a candy thermometer

Once only the finest bit of the flour was in the bowl, out came a Kitchen Aid mixer at least twice the size of the one I own at home. The Kitchen Aid easily whipped egg whites in to a meringue at the same moment that sugar water was being heated to an exact temperature with a candy thermometer. Finally we folded in the dry ingredients and divided the mixture in to four bowls.

The shells themselves aren’t actually flavored. We used pink, yellow, green and orange food coloring pastes to color each of the bowls. Like the precision of mixing the ingredients, we folded in the paste bit by bit to evenly mix it and not alter the texture of the meringue. 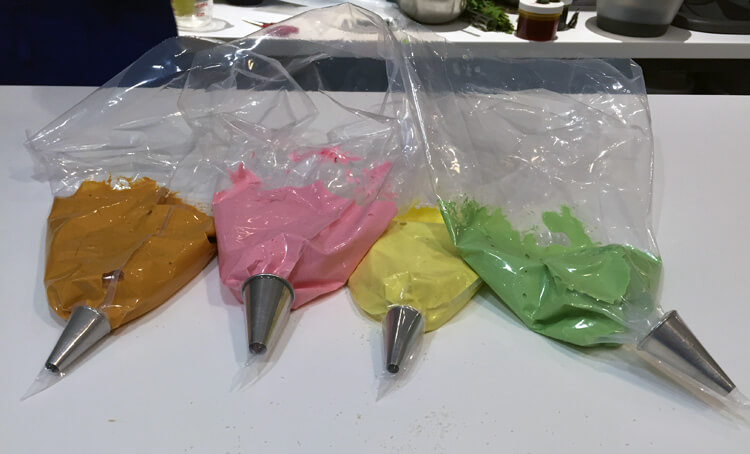 The meringue was finally put in to pastry bags and we were ready to pipe it out on to the baking sheets. And just like taking no short cuts in making the fillings, we didn’t get any stencils to pipe out the perfectly sized shells either. I tried to eyeball it and make each macaron shell the same size. 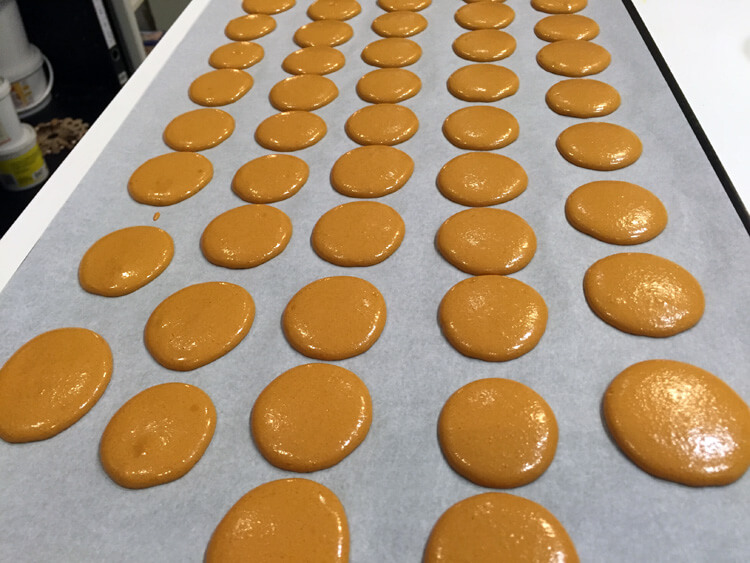 Not bad without a stencil!

Finally our baking sheets were ready to be placed in the convection oven. Macarons are high maintenance! There’s definitely no walking away and coming back when the timer dings. No, we kept watch to ensure the shells wouldn’t crack. The perfect macaron shell is slightly crispy on the outside, still slightly chewy on the inside and has a “foot”.

Our macaron shells did indeed come out with feet. We applauded like a plane full of Italians landing at the airport. But there was still more work to be done. Piping the salted caramel on to the macaron shell The jam was the easiest of the fillings to pipe on to a shell since the jam spread a bit on its own. I didn’t have to press much to complete the little macaron sandwich with the top shell. The chocolate ganache, on the other hand, was harder to work with and I had to take extra care not to crush the shells as I handled them. 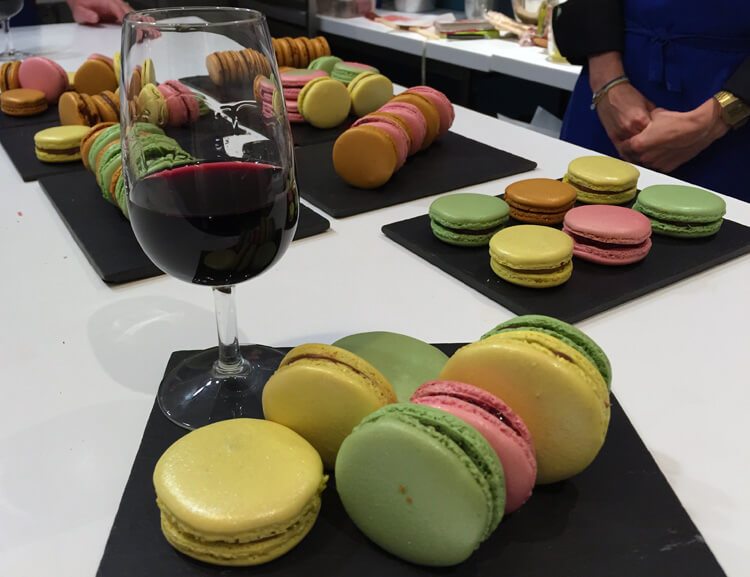 A few of my favorite things: red wine and macarons 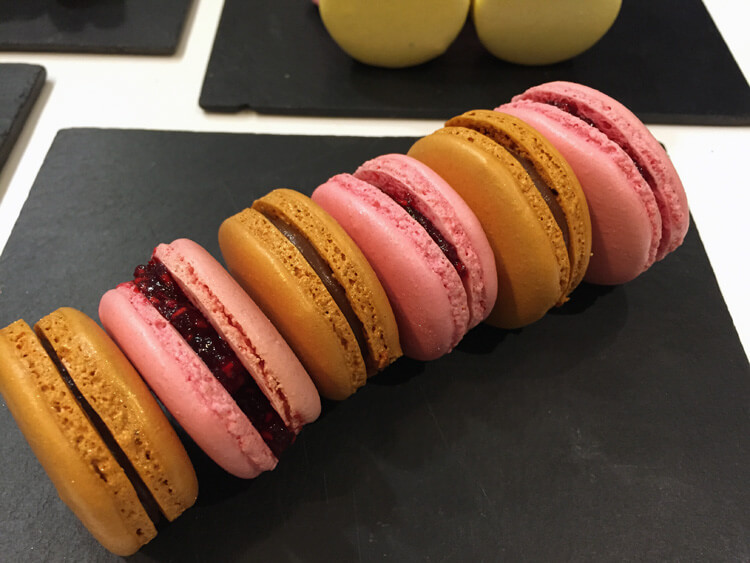 Maybe I have a new career as a macaron maker?

Three hours after I arrived at Cook’n with Class, it was time for my favorite part of the class: tasting our handiwork. Chef Constance even poured us each a glass of Le Sudiste, a merlot-syrah blend, that paired wonderfully with our macarons. Even with each of the five us tasting one of each flavor, there were still more than a dozen for each of us to take home with us.

Though I’ve never even batted an eye at the cost of a macaron (they’re my indulgence), I certainly never will after following a recipe that had more steps than the 387 it takes to climb to the top of Notre Dame. And yet, the work involved hasn’t detered me. I love macarons so much that I am definitely going to give making them at home a try.

Booking
Cook’n with Class Paris offers a variety of dessert and market classes, including the macaron making class. The Macaron Making in Paris class is €130 per person and €100 per child 12 – 16 years of age. The class lasts 3 hours.

I was an invited guest of Cook’n with Class in order to bring you this story. However, Luxe Adventure Traveler maintains full editorial control of the content published on this site. As always, all thoughts, opinions, and enthusiasm for travel are entirely our own.