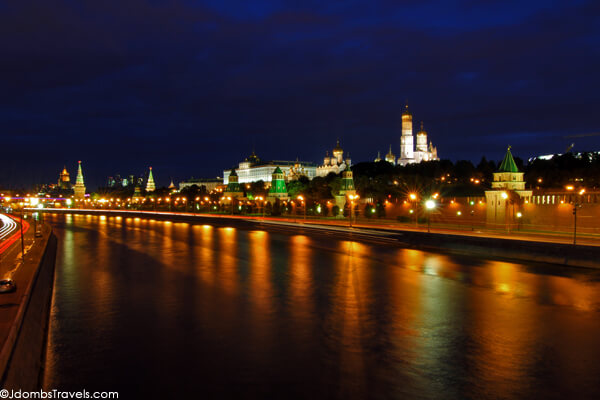 Remember the scene from Mission: Impossible Ghost Protocol when Tom Cruise tries to infiltrate the secret Moscow Kremlin archives, but it blows up? We see the red outer walls as Tom Cruise outruns the explosion. We really only see a small part and filming of the scenes was actually done at Prague Castle. In reality, the Moscow Kremlin is like a self-contained city with a multitude of palaces, armories, churches, government buildings, and remnants of the past. We weren’t prepared for the sheer size of the medieval fortress and all it contains! 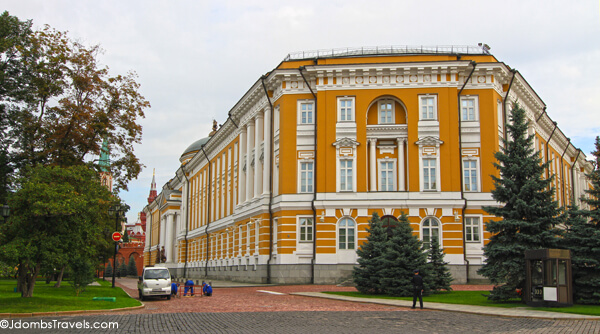 The Senate Building is the residence of Russian president Vladimir Putin

Just entering the Moscow Kremlin felt like we were in our own version of Mission: Impossible. The International Military Music Festival Spasskaya Tower was taking place while we were there and many of the entrances to the gardens leading to the entrance of the Kremlin were closed to the public. Not only that, the Senate Building enclosed inside the walls of the Kremlin is the residence of Russian president Vladimir Putin. Naturally, there are security checkpoints to go through in order to enter the Kremlin. No matter; a visit to Russia’s most famous Kremlin should be on every visitor to Moscow’s must-see list. It’s a lot to take in, so we’ve highlighted the main sights of the Moscow Kremlin. 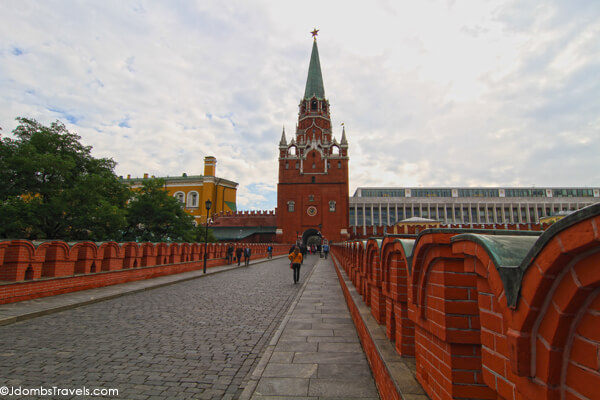 The Kremlin has 19 towers in all, though the Troitskaya Tower is the tallest of all the towers at 80 meters. This gate was used by people on their way to the courts of the Patriarch, the Tsaritsa and the princesses. The top of the tower is decorated with weather vanes and lancet arches. 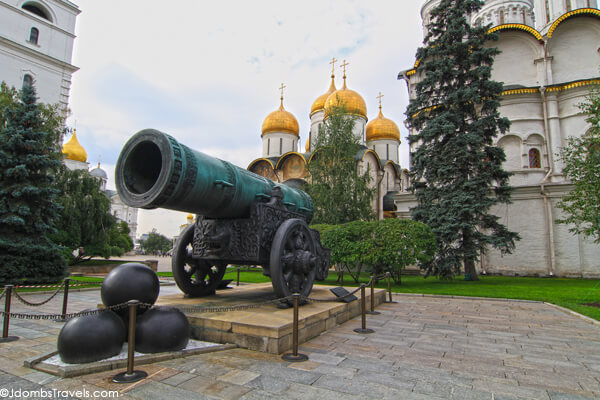 The Tsar Cannon is one of the largest of its kind in the world; according to the Guinness Book of World Records it is the largest bombard by caliber in the world. The 40-ton cannon, which is technically a stylized mortar and not a cannon, was cast during the reign of Ivan the Terrible’s son Fyodor in 1586. It didn’t really have a practical use and was used more as an intimidation factor. It was never used in war, though Napoleon Bonaparte did consider removing it to France as a war trophy. It was just too big for him to bother though! 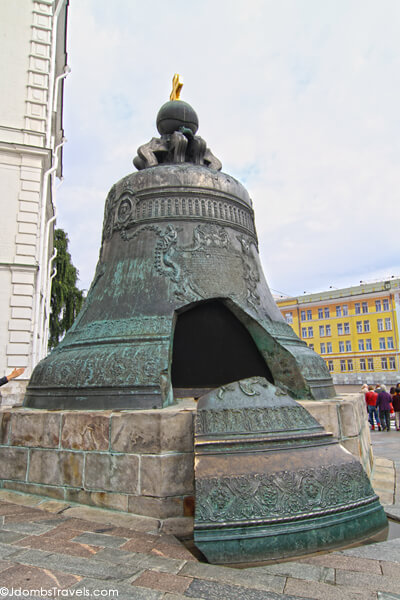 Ironically, the world’s largest bell, the Tsar Bell, resides next to the Tsar Cannon and it was also never used. An engineering attempt gone wrong, the bell was broken during its metal casting and rendered useless. Napoleon also tried to remove the Tsar Bell as a war trophy, but it too was just too big. 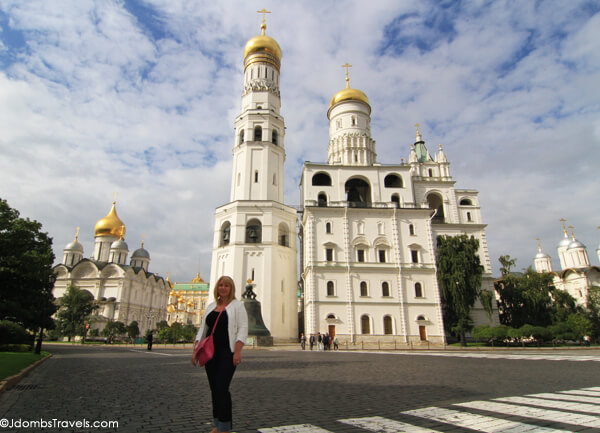 Jen posing in front of the Ivan the Great Bell Tower 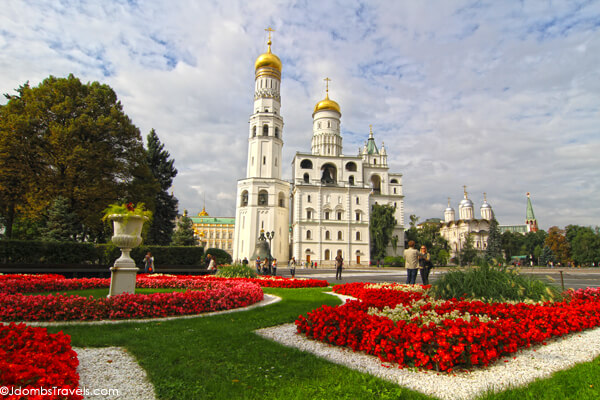 Ivan the Great Bell Tower seen from the gardens

Until the 19th century, no buildings in Moscow were permitted to be taller than the Ivan the Great Bell Tower. It is said to mark Moscow’s precise geographic center and was used both as a watchtower and as a bell tower. At least two dozen bell ringers were needed to set the 21 bells suspended in the bell tower into motion.

Napoleon, unsuccessful at securing the Tsar Cannon or the Tsar Bell as a war trophy after the French invasion of Russia, heard that the cross had been cast in solid gold and ordered it to be taken down. He confused the solid gold cross, which is actually atop the central dome of the Annunciation Cathedral, with the gilded iron cross atop the Ivan the Great Bell Tower. Napoleon was so mad, on retreat he attempted to blow up the tower but it proved to be very stable and only suffered a few cracks in the foundation walls. 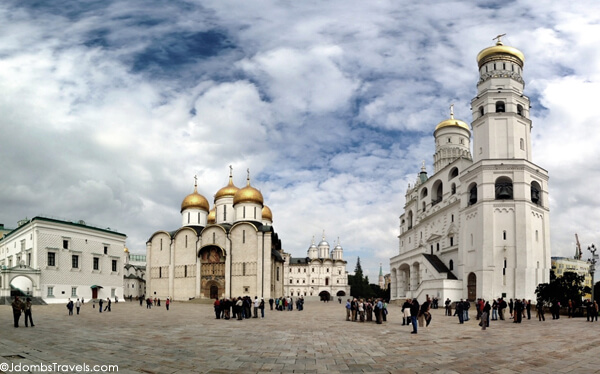 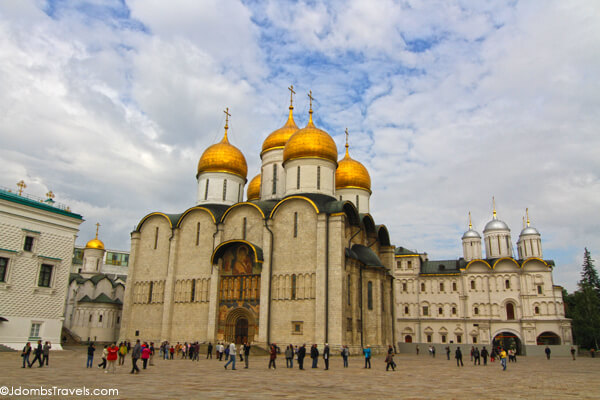 The Cathedral of Dormition has been one of the most important churches in all of Russia since it was built in the 15th century because it has seen the coronation of tsars and royal weddings. Unfortunately, photos aren’t allowed inside, but it is decorated with beautiful frescoes and the Throne of Monomachus, commissioned by Ivan the Terrible in the 16th century, can be seen here. 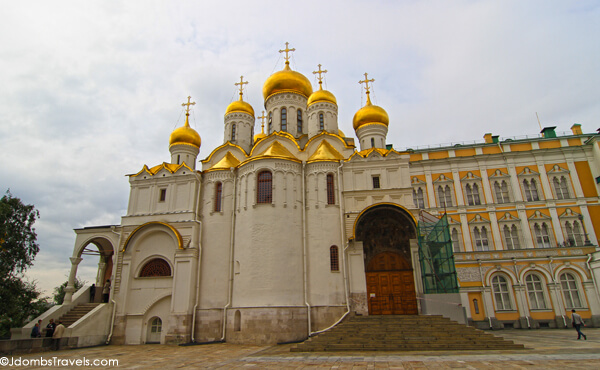 We also visited the Armory, though no photos are allowed inside. It houses the stupendous riches of the Russian tsars from a collection of carriages used by Catherine the Great to over fifty Faberge eggs and even the infamous 190-carat Orlov Diamond.

This is a UNESCO W