You are here: Home / Europe / Russia / Carol of the Bells

The Golden Ring of Russia town, Suzdal, is just 15 square kilometers in size but boasts an incredible amount of well preserved monasteries and churches. One of the largest and best preserved in Suzdal is the Monastery of Saint Euthymius (it’s also amongst the five largest in all of Russia!). The white stone walls have a slight pink color and 12 unique defense towers surround the green and gold seven-onion-dome topped Cathedral of the Transfiguration, amongst other buildings. 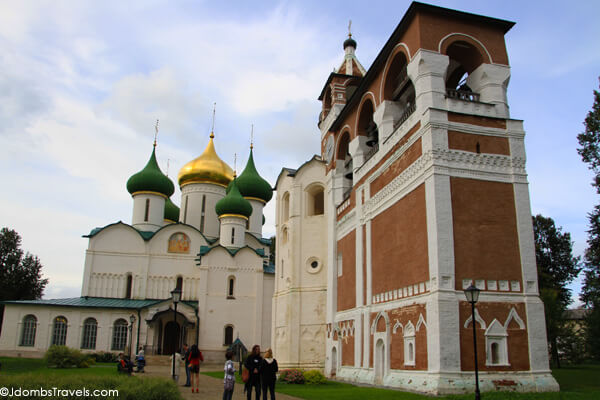 Cathedral of the Transfiguration and the bell tower 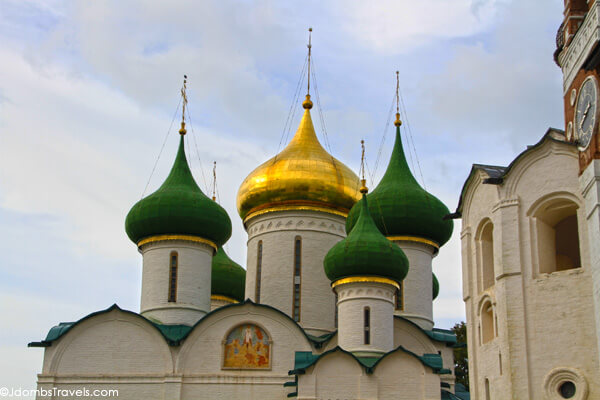 Onion domes of the Cathedral of the Transfiguration

The interior of the cathedrals we saw all throughout our trip to Russia were nothing short of impressive. The cupolas soared high above our heads and every inch of the walls, columns, and cupolas were covered in bright frescoes. Daria, our G Adventures guide, told us that the frescoes helped the illiterate to understand the life of Jesus. 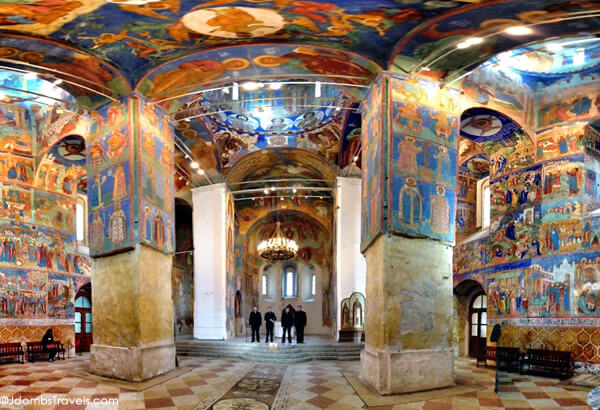 Looking up into the cupolas The interior of the Cathedral of the Transfiguration contains restored frescoes by the school of Gury Nikitin of Kostroma, dating from 1689. Many of the cathedrals did not allow photographs inside, but the Cathedral of the Transfiguration did. The only stipulation was that we could not photograph or video the concert put on for us by some priests of the local choir of the Monastery of Saint Euthymius. I accidentally captured them just as they started their concert. 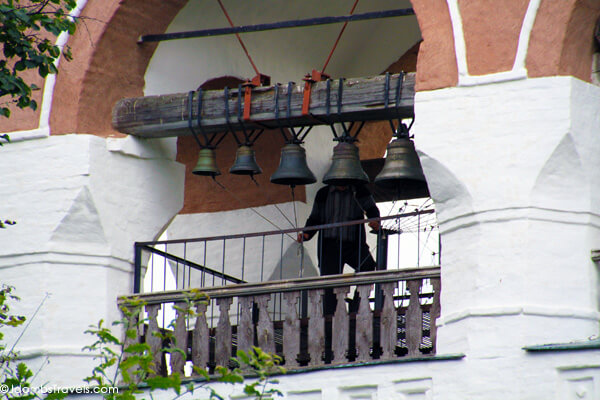 Can you see all the strings for the 18 bells?

The beautiful songs we didn’t quite understand were followed by the peals of the 18 bells in the 17th century bell tower standing before the cathedral. Every hour the bell ringer ceremoniously climbs the bell tower and puts on a short concert. He looked like a puppet with his strings being pulled as he used both arms and legs to set the bells clanging in rhythmic cacophony.

We visited a lot of churches and monasteries on our G Adventures trip to Russia and while the features of many have already become blended together in my mind, the Monastery of Saint Euthymius stands out because of the beautiful music we got to experience. I hope you’ll take a minute to listen to the choir of the bells in our video.

Our trip to Russia was sponsored in part by G Adventures. As always, all opinions about the destinations visited on this trip are entirely our own.