You are here: Home / Lifestyle / It Wasn’t Funny Then…(Our Most Embarassing Travel Moments)

That Time Jen Fell Out of the Sauna

The Finnish sauna is an extremely important part of Finnish culture (more on the Finnish sauna culture soon!) and with more than 2 million saunas in a country with only 5 million inhabitants, it was no surprise our cottage had it’s very own private sauna. Thinking a sauna before bed would be romantic, we stripped down and hopped in. I tend to get quite hot in saunas quickly and was going to hop out for a cold shower. That is until I fully launched myself out of the sauna when I slipped on the steps going down. There I was sprawled naked on the tile floor knowing I looked like a total fool. “Way to kill the mood”, Tim said, trying not to laugh. I’ve spent the rest of the week with a huge ugly bruise on my arm and a daily warning not to fall out of the sauna again. 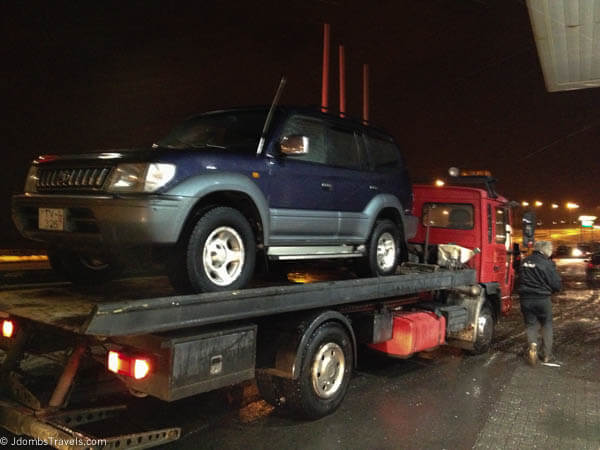 Our Toyota Landcruiser getting towed away

That Time We Filled Our Diesel Car Rental with Gasoline

If you’ve been following us for a while, you may remember this story. Thrilled to be back in Iceland to ring in the New Year, we picked up our Landcruiser from SADCars and got on our way. SADCars policy is you fill up the rental when you pick it up and return it empty. Tim pumped it full of $100 worth of gasoline before realizing it actually took diesel. I was mortified when I had to call SADCars roadside assistance for help a mere 20 minutes after leaving their office. $100 of gasoline, $200 tow and pumping of the gasoline, another $100 in diesel, and a few hours later we were finally on our way. What a way to kick off our trip to Iceland!

That Time Jen Got on the Wrong Plane

Yes, that actually happened. But it wasn’t my fault! I had just had knee surgery and was traveling by myself, so had requested wheelchair assistance. I was flying on a prop plane from Detroit to my hometown Erie, Pennsylvania. The attendant took me down to the tarmac in an elevator and I hobbled on my crutches onto the plane. I had just gotten settled in when the captain announced it would be a smooth ride over to South Bend. I looked around and asked another passenger if I had heard right. Indeed, this plane was headed for South Bend, Indiana and I didn’t want to be on it! I got the one and only flight attendant’s attention and showed her my ticket. She got me off the plane, but I unfortunately missed the flight that was headed for Erie. That was in 2005 and Tim still teases me to this day to make sure I get on the right plane. 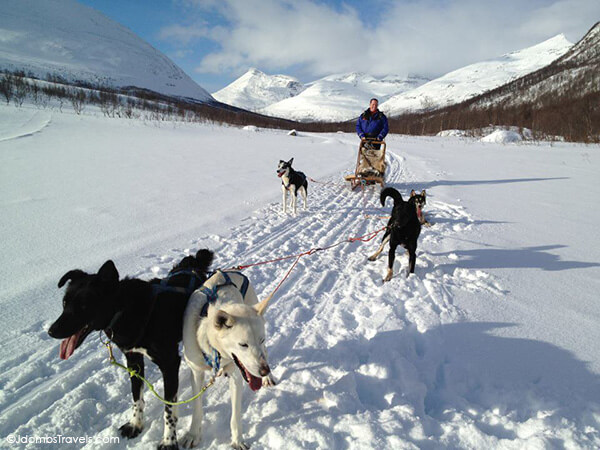 That Time Tim Fell Off the Dog Sled

We had just started blogging professionally and were on a trip with Visit Norway to Northern Norway. Tim had successfully learned to mush just days before in Svalbard, but he clearly forgot the most important rule: never let go. Our husky caravan had stopped for a short break and Tim was snapping photos. The sled in front of us went, so our dog team took off…leaving Tim behind in 2 feet deep snow. Unlike sledding in Svalbard, I didn’t have an anchor to toss out and stop the dogs. So I tried to stick my arm down and flip the sled on its side, all the while thinking “Oh #%*!” Tim was trying to run to catch a team of six runaway huskies. When the sled in front of us finally saw what happened and stopped, our own dog team also came to a halt and Tim finally caught up. “You better never write about me falling off!”, he threatened. Hope he doesn’t read this post!

Garmin comes up with some creative shortcuts, like the time we were driving from the Dead Sea to Petra in Jordan. We had left the Dead Sea after sunset and after a short stop for dinner, it was totally dark by the time we started the nearly three hour drive to Petra. Good old Garmin told us to turn left off the main highway and, at first, we didn’t think much of it. That is until the road completely turned to dirt and we were puttering up high mountain passes in our I-think-I-can-I-think-I-can economy rental. Garmin, of course, had no name for the dirt road; it was simply marked “Unnamed Road” and we had about 30 miles of it to go. We literally didn’t pass another car for hours and the only hint of other civilization were the campfires of Bedouins flickering in the distance. This was in 2011 and we started joking that just maybe Bin Laden was living in any number of the caves we could just barely make out. We’d love to see what exactly the pass we drove over looks like in the daylight…now. But at the time, it was nerve wracking. We were never so happy to see the glittering lights of the city of Wadi Musa.

Note: Jordan was and still is one of our absolute favorite countries and we never actually felt unsafe anywhere in Jordan, even during the Arab Spring of 2011.

That Time Jen Fell Backwards on the Up Escalator

I apparently fall down a lot, but only overseas. My mom and I had just arrived in Paris via train from the airport and were dragging our bags up the escalator. My mom somehow got her bag stuck and I was trying to help her. She gave her stuck bag one swift tug and sent me tumbling backwards. I landed on top of my own suitcase, which was now pointed wheels heading up and I myself was pointed feet heading up. I tried to no avail to right myself and was afraid of getting caught once the escalator recycled itself at the top. Just as I finally managed to get up, I noticed the cameras all around in the metro station. Some French person somewhere was surely having a good laugh at my expense and was no doubt thinking “stupid Americans!”

That Time Tim Ordered Potatoes with a Side of Potatoes

Northern Italy still has influence from the times of the Hapsburg Austrian Empire. German is widely spoken and that means restaurant menus often are also in German. We had only been living in Italy for about six months when we went exploring the Northern Italian countryside and stopped at a random place for lunch. Neither of us knows any German beyond the basic “danke” or “guten morgen”, so we fumbled around the words on the menu, randomly picked, and hoped for the best. Our waitress gave Tim a slightly funny look, but wrote down our order anyway. It was no wonder! Tim had ordered a stuffed baked potato and had requested a side of fries with it! Obviously something was lost in translation…

Now that you’ve had a good laugh at mostly my expense, do you have any embarrassing travel moments to share?

“Loving you had been my favorite adventure so fa