You are here: Home / Caribbean / Bahamas / Drinking the Real McCoy on a Nassau Rum Tour 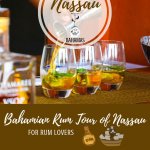 The Bahamas isn’t just fun in the sun on white sugar sand beaches and in crystal clear cerulean waters. And there is much more to Nassau beyond the hopping bars like Señor Frog’s or Atlantis’ water park. The Bahamas has a fascinating history of pirates (and I don’t mean Pirates of the Caribbean, though much of the movies were filmed in the Bahamas) and rum running. We learned all about piracy and the finest Bahamian rums on a Nassau rum tour.

The first people of the Bahamas were the Lucayans, who arrived from the Caribbean islands somewhere between the years 500 and 800. But recorded history of the Bahamas began in 1492 when Columbus sailed the ocean blue. Unfortunately for the Lucayans, there was no gold to be found on the limestone islands and so the Bahamas held very little interest for the Spaniards, except for slave trading. Nearly all of the Lucayans were transported to other islands as laborers over about a 30-year period and then the Bahamas was left abandoned for the next 130 years.

In 1666 seaman settled on New Providence (the island that Nassau is located on) and it quickly became the center of commerce in the Bahamas. With the Bahamas close to the sailing route between Europe and the Caribbean, shipwrecks were quite common in the shallow waters of the Bahamas. Salvaging quickly became a lucrative source of income for the first settlers of New Providence and piracy was born out of the conflicts over trade and colonization among the rival European powers of the time.

Salvaging and looting eventually gave way to smuggling and some the most notorious pirates of the Golden Age of Piracy became rum runners, making profits upwards of $300,000 per trip by selling rum to the Americans during Prohibition.

And with that little lesson in the history of the Bahamas, we officially got down to the business of tasting shots of rum. In my previous experiences with drinking straight shots of rum, it went something like take a deep breath, toss the shot back and try not to make a face as the rum burned all the way down in to my stomach. Who knew that just like tasting wine, there is a proper way to taste rum.

As we first swirled the rum around the shot glass and observed its legs on the glass (just like with wine), I imagined swirling my rum with Blackbeard, who was known to sit in the New Providence harbor with a barrel of rum and invite passersby to drink with him. I tossed the shot back, swished it around my mouth and swallowed while sucking in air as our guide, Jason, directed.

The first shot, a Bacardi Superior aged 1 year, was like drinking rubbing alcohol.

“Oh, that was awful,” exclaimed one of the women on the tour. I was glad I wasn’t the only one thinking it. This rum is one you should definitely mix with fruit juice…or something. Anything.

Though you can just drink the spiced Bacardi Oakheart over ice, Jason recommended drizzling it over ice cream. We tried more of it in a drink called a Rum Runner, with amaretto, black currant liqueur, fruit punch and Bacardi Oakheart. It went down a little too easy as we marched up a hill in downtown Nassau carrying our drinks along.

Just like the French use wine in cooking, the Bahamians use rum in cooking. One of the delicious things they make is a Bahamian rum cake in which a moist pound cake is married with a dark rum syrup. We sat in the garden of a local art gallery enjoying the favorite Bahamian dessert and hearing more stories of rum running during Prohibition.

It was the sailor William McCoy, when transporting liquor from the Bahamas to Martha’s Vineyard on his ship the Arethusa, who coined the phrase “the real McCoy.” McCoy never drank much himself, but he always tasted what he was transporting and assured his customers that they were getting the real McCoy and not some homemade swill or moonshine.

After McCoy was indicted for making landfall, he moved his bootlegging business to 3 miles offshore and the Arethusa became known as a floating liquor store.

If I thought that the marriage of pound cake and rum was a perfect match, then the rum balls made of chocolate ganache rolled in hazelnuts and soaked in rum, with an extra shot of rum, were bites of heaven. While The Graycliff Chocolatier does sell some rum-filled chocolates like their white chocolate and pale rum truffles, the rum balls are made for and can only be tasted exclusively on the Nassau rum tour. That alone is reason to book this tour. Trust us.

The tour finished up with a visit to the John Watling Distillery, named after a pious pirate who sailed the Bahamian seas. We were greeted with samples of piña colada before a short tour of the distillery.

The Buena Vista Estate, meaning beautiful view, is set atop the highest point on New Providence island and the lush, quiet gardens immediately make you forget that you’re a stones throw from the bustling port.

All of John Watling rums are fermented onsite and distilled from freshly pressed sugar cane molasses. We visited the store room where all the rums are bottled in the old-fashioned way by local hands. Barrel rooms are always our favorite places to visit when touring wineries and the distillery was no different with the scents that filled the air with the Angel’s Share (the portion lost to evaporation as the rum ages in the barrels).

The Nassau rum tour ends with three more shots of John Watlings rums and the Buena Vista was without a doubt the smoothest rum of the day. We were left to enjoy one final drink called the Rum Dum, with lime juice, simple syrup, pale rum, amber rum and an egg white.

Who knew a history lesson could be so fun? Jason was extremely knowledgeable and we had a fantastic time learning about pirates, rum and the history of the Bahamas.

Getting ThereBooking
The tour starts close to the Straw Market in downtown Nassau. Cruise ship passengers can easily walk. Paradise Island guests can take a taxi or the ferry, both $8 each way. Sandals Royal Bahamian guests can take a taxi for $15 each way.
The Nassau Rum Tour is $70 per person. Hotel pick-up and drop-off is not included. This tour is not suitable for people under 18 years of age, which is the legal drinking age in the Bahamas.
Book Now