You are here: Home / Europe / Russia / Moscow’s Most Beautiful Cloister

Founded in 1524 along the bend of the Moscow River, the Novodevichy Convent (New Maiden’s Convent) commemorated the capture of Smolensk from Lithuania. It not only served as a religious institution, but also as a fortress with strong defensive walls and 12 battle towers. We were told it is Moscow’s most beautiful cloister, second only to the Kremlin, so we set out on foot to visit the convent and fortress. 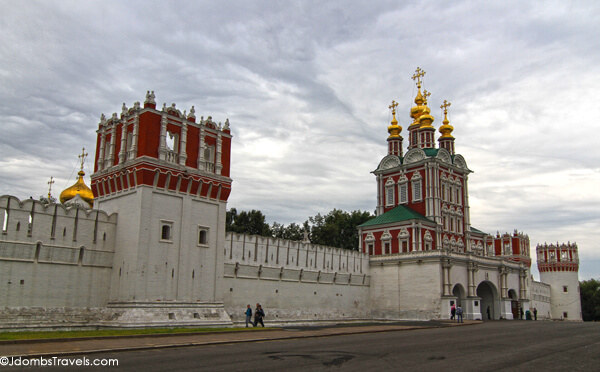 Situated on Moscow’s south-western end, Novodevichy Convent is far removed from the hustle and bustle of Moscow’s famously traffic jam-packed streets. In fact, for most of our visit, we practically had the entire complex to ourselves, spotting only a handful of other people wandering the grounds. We easily fuddled through getting our tickets with a kind woman who spoke not a lick of English, but did her best to explain what we should visit inside.

It was our first morning in Russia and we had decided to arrive a few days ahead of our G Adventures tour that would take us from Moscow to St. Petersburg along a route called the Golden Ring of Russia. It was visiting beautiful architectural masterpieces like Novodevichy Convent on our own that really made us appreciate Daria, our G Adventures guide. Aside from a few plaques that had blurbs of information in English, everything was in Russian, including the information pamphlet I’d been handed. 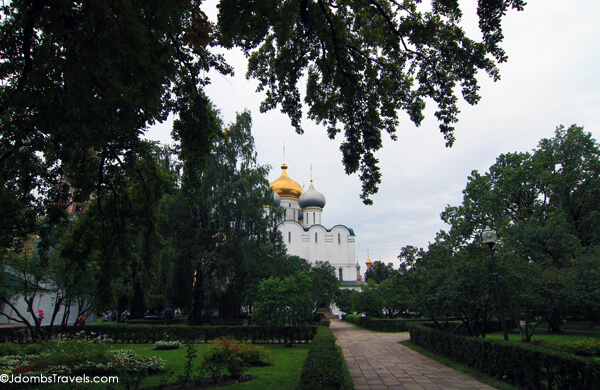 Cathedral of Our Lady of Smolensk

Inside the complex, there are 4 buildings visitors can enter and a docent will collect a tear-off part of your ticket for each one, so keep them easily accessible. It was particularly gray morning and the clouds above threatened to open up upon us at any second. Apparently if it is raining, the Cathedral of Our Lady of Smolensk closes to visitors. With sprinkles beginning to fall, another kind Russian women quickly pointed us at it and hustled us along. 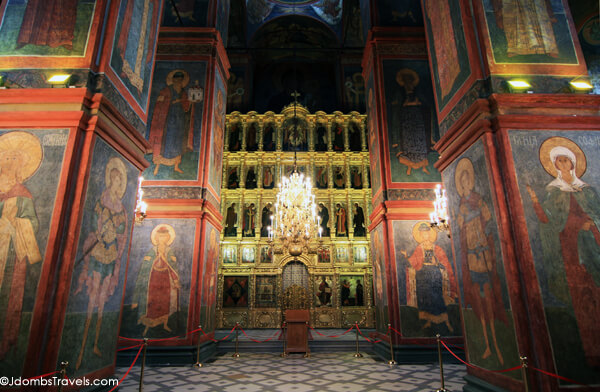 The iconostasis inside the Cathedral of Our Lady of Smolensk

The cathedral is the oldest monument in the complex, dating from 1524–1525. Most of the churches we visited throughout Russia did not allow photography inside, so this is a special treat for us to be able to share with you! We could only marvel at the interior at the time, but we later learned with Daria that the iconostasis is the wall of religious icons and paintings comprised of five tiers. Each of the icons and paintings has a very specific placement and on the first tier, immediately to the right of the gates is always a depiction of the patron saint or feast day to which the church is dedicated.

Looking up in the Cathedral of Our Lady of Smolensk

According to a legend, Napoleon had ordered the cathedral to be blow up, but a brave nun extinguished the fuse just in time and saved the cathedral from sure destruction. I don’t know how much truth there is to the legend, but I’m glad for that brave nun. The columns and walls are all covered in frescoes and stretch high above to the five onion domes. I sat on a wooden bench for a while just taking it all in. 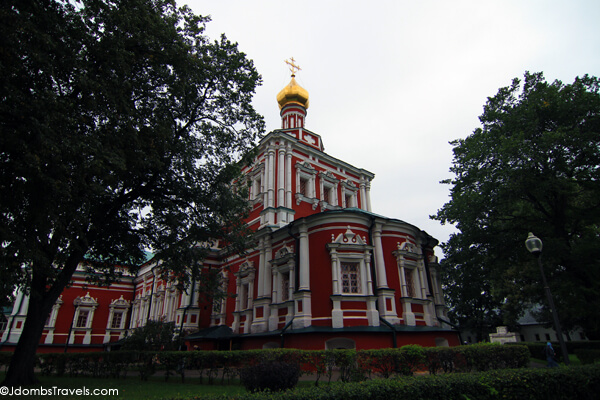 Church of the Assumption 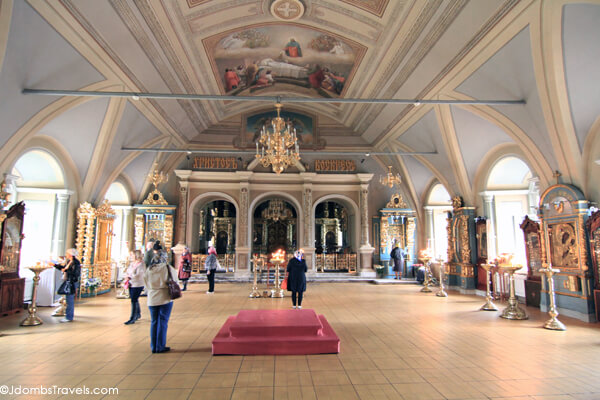 The red-and-white Church of the Assumption stands to the right of the Cathedral. Here, we again sat on a wooden bench and observed as Russian worshiped. The vaulted windows were each interspersed with individual iconostasis. Admittedly, I don’t know anything about Russian Orthodox, so we just watched as the prayer goers said a prayer to each iconostasis. There didn’t seem to be a specific order; some started from the left, others from the right. Two other buildings houses various exhibits like rare and ancient Russian paintings, woodwork and ceramics, fabrics and embroidery, and a large collection of illuminated and illustrated books decorated with gold, silver, and jewels. Also surrounding the cathedral is the Necropolis of the Convent, where the women of the tsarist and ruling families were buried. If you know a bit of Russian, you can wander around and see which famous Russian women of nobility are buried here.

The convent was actually closed after the socialist revolution of 1917, though it re-opened as a state museum in 1926. It resumed its original function as a convent in 1994 and services have been held on saints’ days in the Cathedral of Our Lady of Smolensk since 1995.