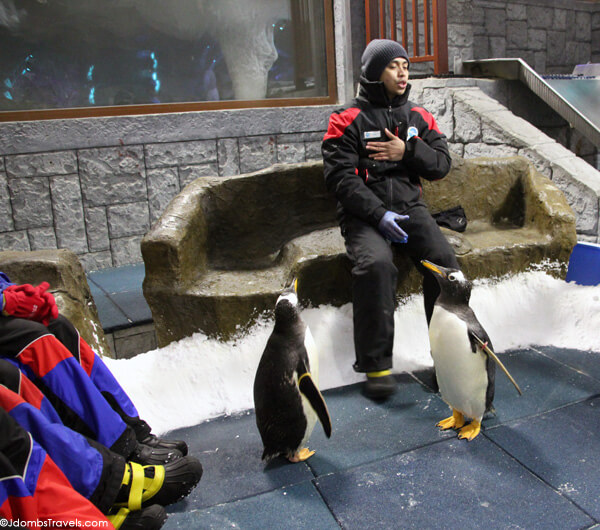 Lucifer and Pie, two Gentoo penguins and their trainer

Dubai and penguins generally don’t go together in the same sentence, but Ski Dubai in the Mall of the Emirates is home to 10 Gentoo and 10 King penguins. The penguin colony arrived from Sea World San Diego on December 31, 2011 and were part of the penguin breeding program Sea World has had for a number of years. All 20 are third generation penguins born in captivity and have never lived in their natural habitat of Antarctica. The penguins act as ambassadors of their wild counterparts and the unique penguin encounter program helps to educate visitors about the need to conserve their threatened natural habitat of Antarctica.

An estimated 3 million King penguins and more than a half million Gentoo penguins live in the wild. Neither species is presently under threat but global warming threatens Antarctica. Less than 40,000 people visit Antarctica annually and it still remains one of the most remote destinations on earth. 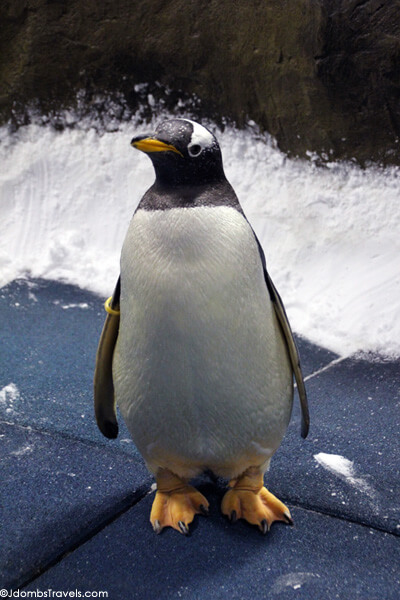 Our penguin encounter began with a short video educating us on how to safely interact with the penguins. Next we properly cleansed our hands with a special sanitizer so we didn’t bring any germs in that might make the penguins sick. Finally it was time to meet the penguins and I felt like a child on Christmas morning! 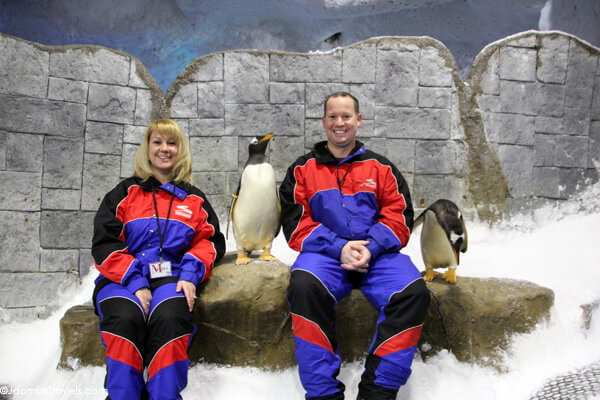 Posing with Lucifer and Pie

We first met Lucifer and Pie, two Gentoo penguins. Gentoo penguins are the third largest type of penguins, but only stand at 24 – 30 inches tall and weigh 12 – 14 pounds. Because they are small and fast, we were asked to sit before the penguins were let in. After they settled down a bit from their excitement, we moved over to sit on some rocks and the trainer told Luci and Pie to come stand near us for a picture. What smart little birds! They posed and then hopped down and ran back over to the trainer for fish for a job well done. 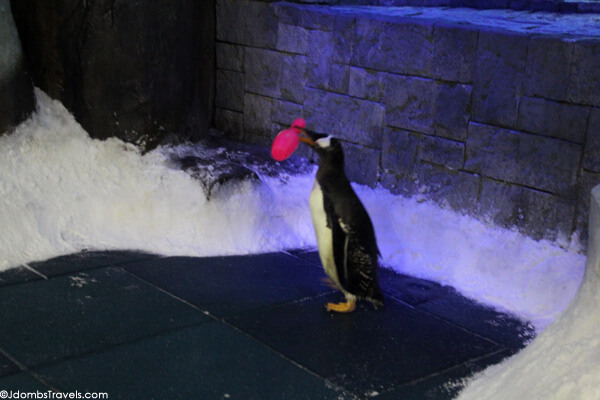 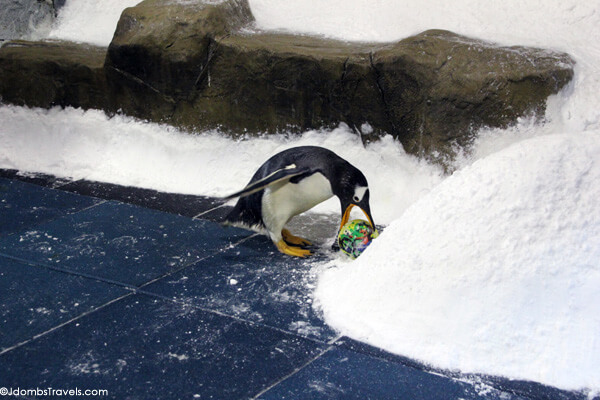 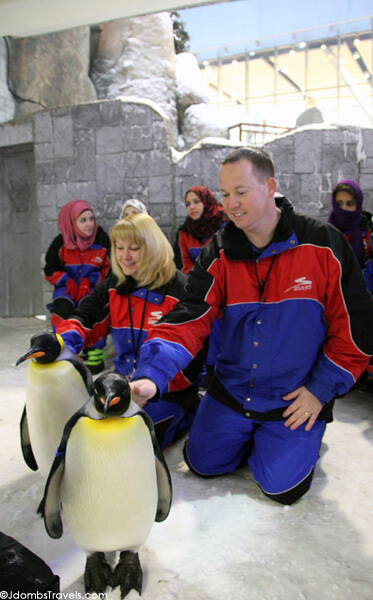 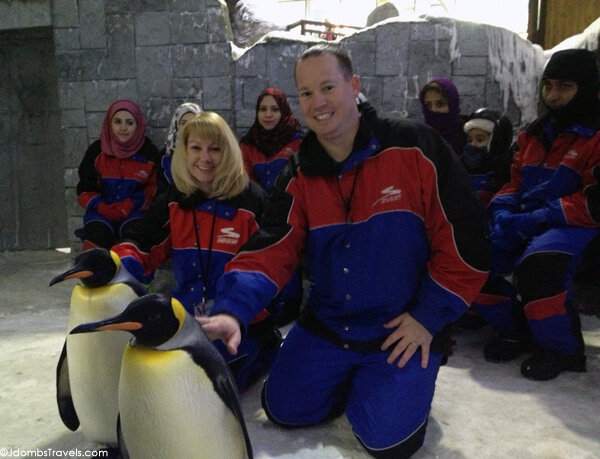 Next, we met Haddy and Mona Lisa, two King penguins. They are much bigger than the Gentoo penguins, standing at 37 inches tall and weighing more than double of the Gentoo penguins at 30 – 35 pounds. King penguins can’t hop and run like the Gentoos, so I was able to give Mona Lisa a hug and a kiss on the top of her held. While they look sort of rubbery like a seal or dolphin, penguins do have feathers and are incredibly soft. They like having their backs and bellies stroked! 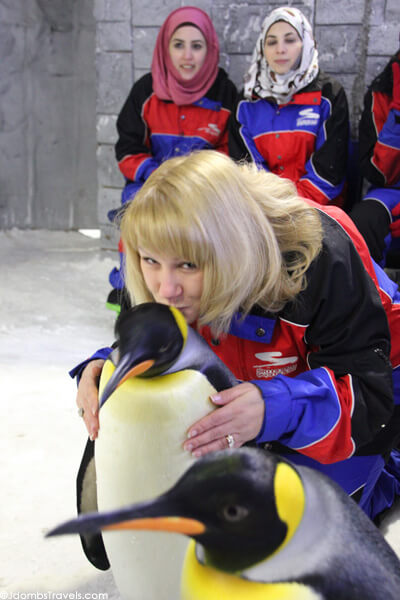 Have you ever kissed a King penguin?

Mona Lisa got somewhat agitated when it was Tim’s turn to give her a hug and waddled away to the other side of Haddy. The trainers at Ski Dubai never make the penguins do anything they don’t want to do and take cues when the penguins are letting them know their patience is wearing thin. We gave Mona Lisa and Haddy a break with some space and fish to reward them while the trainers explained more facts about them. 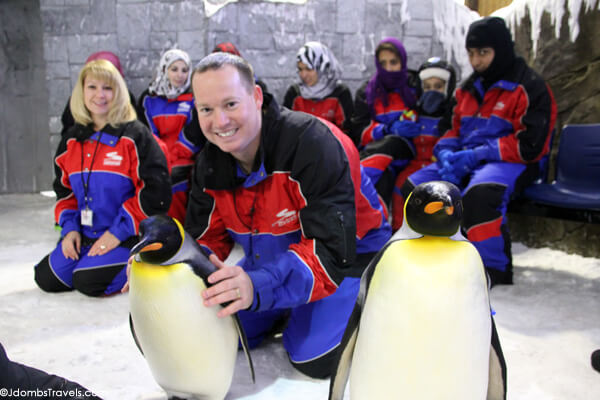 King penguins are the second largest penguins after the Emperor penguin. They walk very slowly and King penguin parents take turns incubating their eggs on the tops of their feet under a loose fold of abdominal skin called a brood patch. They even sleep standing up, just tucking their heads down and huddling together for warmth.

In all, we spent around 40 minutes total with the penguins. The penguin encounter was a fantastic and one-of-a-kind experience you can’t get anywhere else short of going to Antarctica. And I’m fairly certain the penguins there won’t play fetch with bowling pins and balls. Hopefully one day we’ll be visiting penguins in Antarctica but until then, we have the memories of our time with Lucifer, Pie, Haddy and Mona Lisa.

Thank you to Definitely Dubai and Ski Dubai for hosting us and allowing us special media coverage during our penguin encounter. All opinions (and decisions to go around kissing penguins) are entirely our own.