Red-tiled roofs on crooked half-timbered houses. Horse carriages that clippity-clop over the cobblestone streets. Stone walls studded with 42 towers. This is Rothenburg ob der Tauber, a Medieval town that looks like it could be straight out of a movie. I imagine that the town is enchanting any time of the year, but with Christmas lights strung up, a towering Christmas tree in the Market Square, and the wooden stalls of the Rothenburg Reiterlesmarkt snaking through the narrow lanes, Rothenburg is transformed into a living Christmas card. That’s why I think the Rothenburg Christmas Market is the most romantic Christmas market we’ve been to! 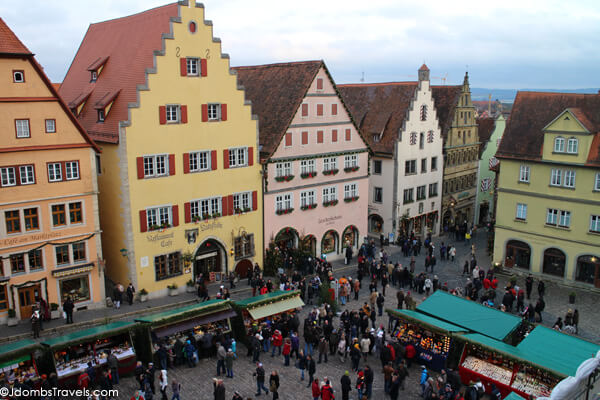 Great views of Rothenburg from the tower!

Though much, much smaller than the Nuremberg Christkindlesmarkt just an hour away, the Rothenburg Christmas Market has been a feature of wintertime in the town since the 15th century. That makes it the oldest Christmas market in Germany full of more than 500 years of tradition! Yum! Franconian sausages with a squeeze of mustard. Glühwein from Rothenburg’s only wine maker

And while the Christmas market was smaller with around 60 stalls compared the the 180 in Nuremberg, we found that it was far less crowded. What the Rothenburg Christmas Market definitely wasn’t lacking was an abundance of goodies to excite any foodie. We snacked on red sausages, toasted pumpkin seeds tossed in toffee, and clenched steaming cups of the traditional white Glühwein. With a plethora of treats to snack on, I could even leave Tim to patiently wait while I dove into the Christmas wonderland known as the Käthe Wohlfahrt Christmas Store, not once but twice. With more than 30,000 items on offer in the mega-shop, I could have spent hours looking at everything! (An inside look at the Käthe Wohlfahrt Christmas Store, thanks to Rothenburg Tourismus Service and a press badge, coming soon.)

Of course, we couldn’t miss out on Schneebälle, the traditional dessert of the area that we saw piled high in market stalls and windows of every pastry shop in town. Strips of a special dough with plum-brandy are formed into a ball and fried and then covered with powdered sugar. Rothenburg may not have changed, but nowadays the Schneebälle come with a variety of toppings from cinnamon sugar to chocolate covered. We may have brought home three, though they didn’t last long. The Town Hall and Market Square One of the tower gates into Rothernburg ob der Tauber

What makes the Rothenburg Christmas Market so romantic is being able to stroll around the stalls serenely hand-in-hand and finding a stoop to snuggle up on with a cup of Glühwein, stealing kisses between sips. Rothenburg ob der Tauber is truly a one-of-a-kind German town and one of the most charming we’ve had the pleasure to visit.

Getting to Rothenburg ob der Tauber

Our trip to Rothenburg ob der Tauber was courtesy of Rothenburg Tourismus Services in order for us to bring you this story. However, Luxe Adventure Traveler maintains full editorial control of the content published on this site. As always, all thoughts, opinions, and enthusiasm for travel are entirely our own.