You are here: Home / Europe / Germany / 10 Reasons to Go to Nuremberg’s Christkindlesmarkt 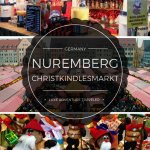 Christmas markets are absolutely magical. The scents of chestnuts roasting, gingerbread baking, and wine mulling waft through the air. The historical cities that play home to them ooze atmosphere and the chilly and sometimes snowy weather is the perfect excuse to snuggle up with your special someone. I’ve done just that as I’ve dragged Tim to countless Christmas markets from Budapest to Prague and Salzburg to Paris.

But we’d never been to a German Christmas market and we thought we’d remedy that by visiting Germany’s most famous one, the Nuremberg Christkindlesmarkt. Nuremberg seems like something out of fairy tale at this time of the year and if that isn’t enticement enough, here are 10 reasons why you should go to the Nuremberg Christmas Market.

I asked Sarah, our new friend from Tourismus Nürnberg, just what makes Nuremberg Germany’s most famous Christmas market. “Because it’s so old and still traditional,” she told me. The Christmas market in Nuremberg’s Main Market Square was first mentioned in a document dating from 1628, so it’s at least that old but probably older. And the people of Nuremberg take pride in that. Most of the wares sold at the market are made by traditional regional manufacturers and even the 180 stalls are still made of regional spruce. More than 30 of the stalls even date back to 1890.

While you might not have a private guide from Tourismus Nürnberg like we did, you don’t have to feel overwhelmed by the Christmas market. I suggest booking a Nuremberg Christmas Culinary tour to hear more about the history and be guided through all the best culinary delights from the Christmas market with a local expert.

3. Stuff your face with the original Nuremberg grilled sausages

Nuremberg takes their sausages seriously. The size and ingredients of the famous pork sausages, spiced with marjoram, were written down back in 1497. The sausage can only be called an “Original Nuremberger” if it is produced within the city limits, weighs exactly 23 grams, and is about as long as thick are your little finger. You’ll find them served in restaurants on a pewter plate with 6, 8, 10, or 12 pieces. My favorite though is hot off the grill, with 3 in a bun, and a generous squeeze of mustard!

Glühwein is such a favorite cold weather drink, we even make it at home. But I have a new favorite and the producer, GERSTACKER, has never revealed his recipe. The family producer GERSTACKER swears by their blueberry Glühwein and have been selling it at the Nuremberg Christkindlesmarkt for more than 35 years. It is a delicious variation and one worth specifically seeking out the GERSTACKER stall for.

Each year a branch of the Nuremberg Christkindlesmarkt comes to Verona, Italy and I’ve been a few times. But what I didn’t know is that Nuremberg plays host to around 20 sister cities at Rathausplatz, where cities from Atlanta to Sri Lanka set up with their own traditional goods. You’ll find things like lavender honey from Provence, Hot Toddy’s from Scotland, salami and cheese from Italy, and matryoshka from Ukraine. It’s also undoubtedly far less crowded than any other area of Nuremberg Christmas markets we visited and the line for Glühwein at the Austria stand is much shorter than any of the others.

Zwetschgenmännle, or Prune Men, have been sold at the Nuremberg Christmas market for decades. The Prune Men were supposedly invented in Nuremberg in the 18th century by a wire drawer. Wanting the perfect gift for his children, he only had wire and the plums that grew on the tree in front of his house. Cleverly, he created Prune Men for them, though they ate the prunes from the figurines. Today Prune Men come as everything from the traditional chimney sweeps to Harley wielding bad asses. No matter which you choose, they make a great souvenir unique from Nuremberg (but shouldn’t be eaten).

The Christkind has been a symbol of the Nuremberg Christmas market for decades. A blond girl between the ages of 16 and 19 is chosen every two years and, wearing her gold crown and white gown sparkling with strands of gold, opens the Christkindlesmarkt with a prologue from the balcony of the Church of Our Lady. She makes appearances every Tuesday, Wednesday, Thursday, and Friday at 3pm throughout the Christkindlesmarkt. We didn’t get to meet her since we visited on the weekend, but you can climb up to the balcony of the Church of Our Lady for a small exhibit about tradition of the Christkind.

With 180 stalls at the Christkindlesmarket and even more stalls to chose from at the Sister Cities Market and other various Christmas markets snaking through Nuremberg’s historic old town, there is surely a unique gift for everyone on your Christmas list. And shopping among the thousands of twinkling lights, scents of Nuremberg sausages, and with strands of Christmas carols in the air is much more fun than hitting the stores of any shopping mall. Be on the lookout for colorful handcrafted German nutcrackers, pyramids, hand painted Christmas ornaments, and hand crafted porcelain Nativity sets.

9. Take a mail coach trip around the Christkindlesmarkt

Almost before you hear the clippity-clop of the Clydesdale’s hooves on the cobbles, you can spot the bright yellow mail coaches in the distance. The mail coaches take visitors for a charming ride around the cobbled streets of the old town surrounding the Christkindlesmarkt.

There is so much more to do in Nuremberg besides visit the Christmas markets. Nuremberg has over 30 different museums to visit and we enjoyed taking a trip back to our childhood at the Nuremberg Toy Museum. We also took a stroll up to the Nuremberg Imperial Castle and stopped in for a liter of dark beer at the Hausbrauerei Altstadthof brew house, just to name a few things you can do.

Our trip to Nuremberg was provided by Tourismus Nürnberg in order to bring you this story. However, Luxe Adventure Traveler maintains full editorial control of the content published on this site. As always, all thoughts, opinions, and enthusiasm for travel are entirely our own. This article contains affiliate links. When you book on Booking.com or shop on Amazon through our affiliate partner sites, we earn a small commission at no additional cost to you.