I’ve seen Hoover Dam a hundred times. We made the drive out there and did the Dam Tour with every visitor we had over the course of the five years that we lived in Las Vegas. But I’ve never seen Hoover Dam like this – upside down while strapped in to the open cockpit of a bright yellow Waco Classic bi-plane. I’m flying with Sky Combat Ace, a company that offers extreme aerial adventures over the Las Vegas desert, and it is AWESOME! 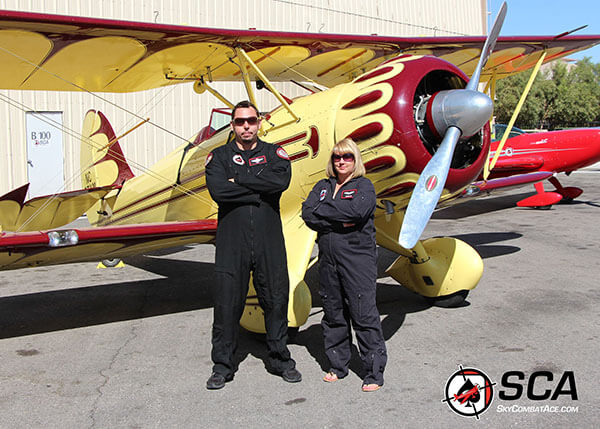 “Tex” and “Bubbles” are bad ass

Richard “Tex” Coe, expert aerobatic pilot and owner of Sky Combat Ace, is a former Air Force fighter pilot. He was even stationed at Aviano Air Base in Italy, where Tim is stationed now. Part of his job was a pilot for incentive flights, a program the US Air Force has to offer individuals who show exceptional performance in their duties, a flight in an F-16 fighter jet as a reward for a job well done. Tex saw how these guys would be on a high for hours after their flight and when he separated from the military, he wanted everyone to be able to experience that thrill. Sky Combat Ace was born. 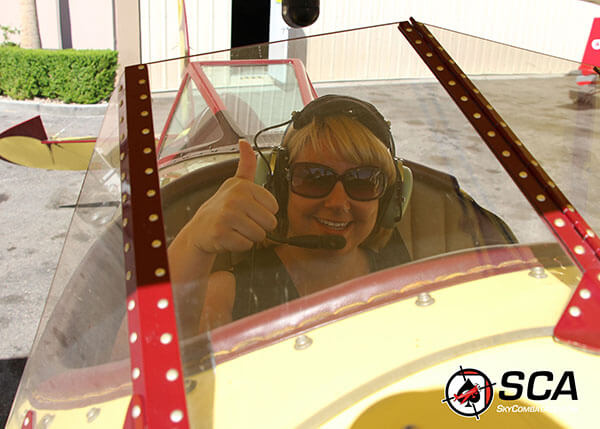 Sky Combat Ace does have Extra 330LCs, which are essentially a lighter version of an F-16, but Tim would have killed me if I went dog fighting before he ever did. (Hello Air Force, the man deserves an incentive flight already!) So I chose to have a different thrill ride in Sky Combat Ace’s Waco YMF-5C Classic. It’s an open cockpit bi-plane that was built in 2001, but modeled after the same design as the 1938 original. I’m more of an Amelia Earhart than a fighter pilot anyway.

The Non-Gamblers Guide to Las Vegas

The experience begins with a safety briefing that covers all the scenarios that could happen. It’s geared toward the dog fighting experience, but is entertaining with some video clips of how previous customers have reacted to the g-force. Apparently 9 gs is enough to make the average person without fighter pilot training pass out! But not to worry, Sky Combat Ace has an impressive 100% safety record thanks to the top-notch expert pilots with you every step. The briefing wraps up with selecting your callsign. I let the group of guys doing the dog fighting as a bachelor party pick my callsign and I ended up with the cutesy “Bubbles”. 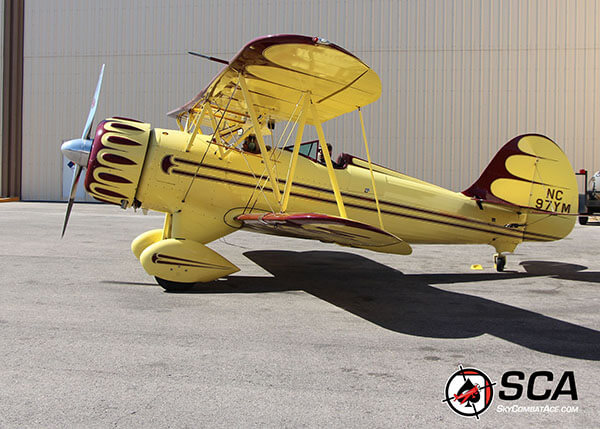 Taking off from Henderson Executive airport

Ever had the thrill of the wind whipping through your hair while cruising in a convertible? Well, imagine the thrill of flying around in a convertible airplane. We were soon flying over Boulder City, the historic city that came to be during the construction of Hoover Dam. As we flew, Tex gave me a little tour pointing out the expansion of the Las Vegas valley over the last couple of year. 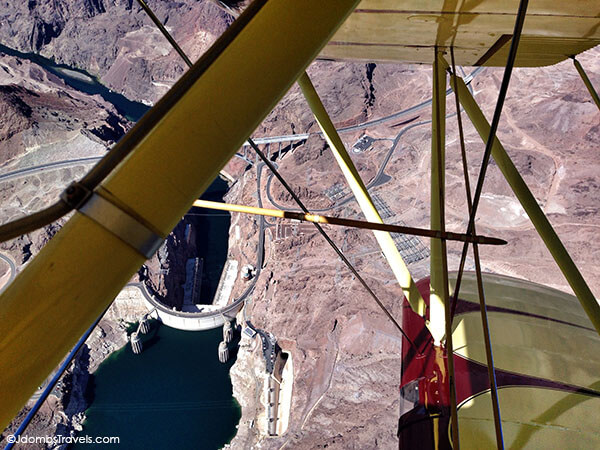 But the real highlight is seeing Hoover Dam in the most awesome way possible. We circled the dam and then we did loops, in which you are completely inverted at the top of the loop, and barrel rolls. Bet you didn’t think that cute little yellow plane could do that, did you?

The guys from the bachelor party were still there when I got back from my aerials stunts over Hoover Dam and they couldn’t believe that the Waco Classic could do loops and barrel rolls either. I got a bunch of high-fives and secretly patted myself on the back that I didn’t lose my breakfast. Heck, I’m still raving about what an awesome experience Sky Combat Ace was. This is a MUST do on your next trip to Las Vegas.

I was a guest of Sky Combat Ace and photos and videos were provided in order to bring you this story. As always, all opinions and rave reviews are entirely my own. This is seriously an awesome experience you must do!