You are here: Home / Europe / Svalbard / Snowmobile Safari Across Svalbard

We arrived in Svalbard less than 24 hours before and we’d already heard the buzz about polar bear paw prints that had been spotted just 1 kilometer outside of Longyearbyen. As I pulled on my layers that morning for our snowmobile safari across Svalbard, I prayed we would get our chance to spot a polar bear in the wild. Our snowmobile safari would take us around 85 miles round trip from Svalbard’s largest settlement out into the Arctic wilderness. 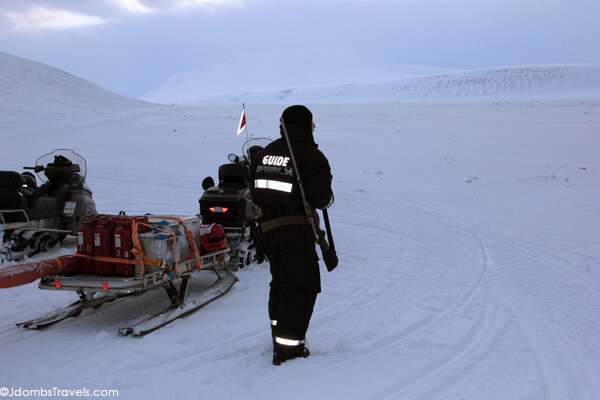 Headed out with a high-powered rifle and emergency supplies

Our guide was towing a sled behind his snowmobile packed with sufficient gasoline, food supplies for ten people even though only five of us were headed out, an emergency shelter, satellite phone, and a complete change of clothes from boots to hat. The weather can change in an instant in the High Arctic and you can never be too prepared. Along with the fully packed sled, he slung a high-powered rifle over his shoulder. 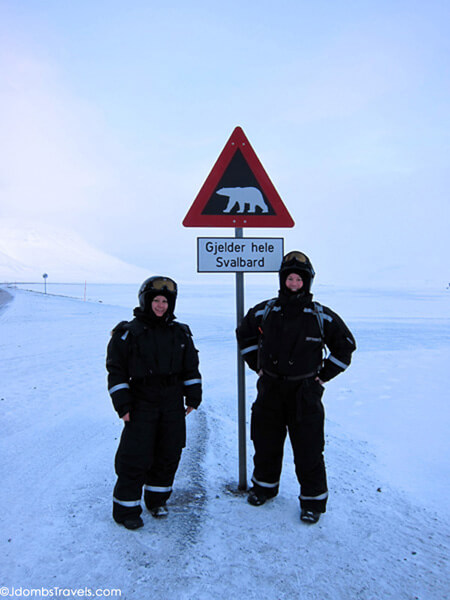 Gjelder hele Svalbard. The infamous sign stands on the outskirts of Longyearbyen and indicates this is the farthest anyone should venture without a high-powered rifle. You just never know where a hungry polar bear might be lurking. As much as I wanted to see polar bears, a little shiver went up my spine (and it wasn’t from the biting wind and Arctic temperatures on this island a mere 600 miles from the North Pole). 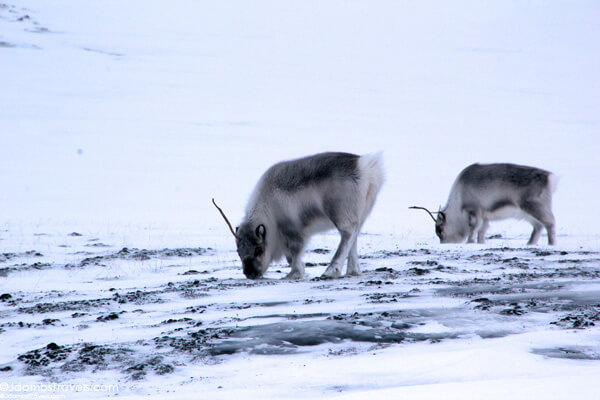 After getting a handle on our Ski-Doo snowmobiles, we raced along the 19-mile long Advent Valley, weaving across the frozen Adventdalselva River. Herds of Svalbard reindeer were digging for lichen beneath the icecaps and they weren’t the least bit bothered by us. Svalbard reindeer have no natural enemies and the population numbers are closely monitored.

We reached Brentskaret, the pass that divides the Adventdalen and Sassendalen valleys, with stunning views of high mountains and glaciers. The Svalbard reindeer dotting the mountain slopes and ridges were the only contrast to the otherwise bluish-white world. As we descended the slopes and scooted across the valley, our guide suddenly stopped us. “Was it a polar bear?!”, I thought to myself. No polar bears, but two Arctic fox were frolicking and chasing each other just ahead of us. We watched them until the moved off far enough away for us to continue; Svalbard has very strict laws about not disturbing the wildlife. 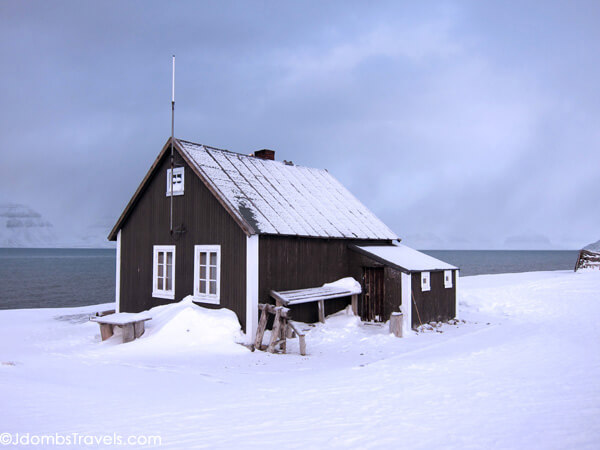 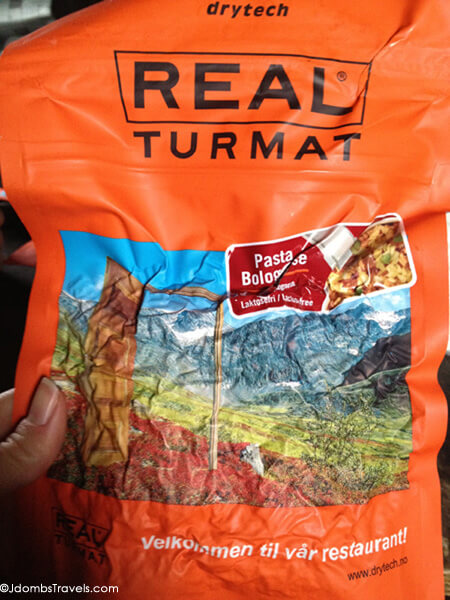 Hungry and time for lunch, we parked our snowmobiles at Sassenfjorden and bolted ourselves into the emergency hut at the unusual trapper’s station Fredheim, Over an expedition lunch of freeze dried pasta bolognese, we heard the story of Fredheim, the most famous trapper’s station in Svalbard. What makes it so unique is that children were born at Fredheim. Tthe main building was built by Hilmar Nøis in the 1924 and married Ellen Dorthe Johansen Nøis, who was enchanted by Hilmar’s solitary lifestyle on the fjord. Ellen became pregnant and gave birth to their son alone when Hilmar and the doctors could not reach her in time. After that, she felt the solitary lifestyle was too burdensome and returned to Tromsø with her son, never looking back. Hilmar met his next wife, Helfrid, on a coastal steamer in the summer of 1936 and invited her to come live with him at his “villa” in Sassendalen. Helfrid, who was a servant at a villa in Oslo, returned to her job laughing off Hilmar’s offer. After several letters from the persistent Hilmar, she decided to go to Svalbard. What she must of have thought when she arrived to the four building trapper’s station! But Helfrid made it her home and spent a very happy life there with Hilmar for many years. 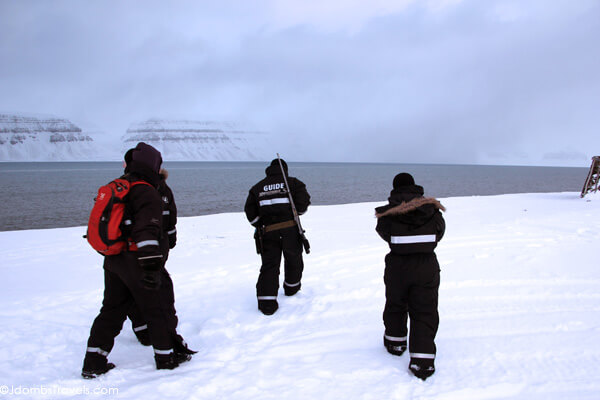 Peaking out the tiny windows of the emergency hut and declaring it clear of polar bears, we went for a walk along the beach. The Arctic Ocean lapped at the shore, though it should have been frozen several meters thick. In fact, we were supposed to continue our snowmobile safari across the Arctic Ocean here, but the temperature winter had kept the sea ice from forming. 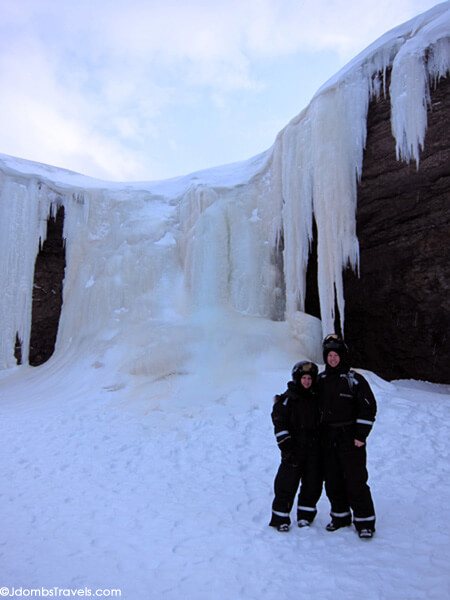 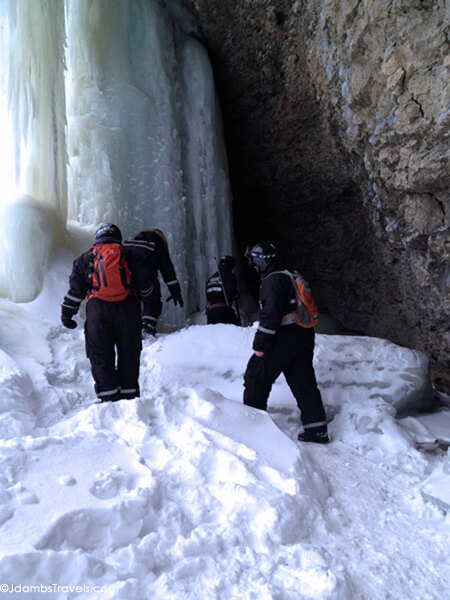 Not being able to cross the Arctic Ocean, we did have time to stop for a visit at Eskerfossen, the frozen waterfalls. Walls of blue ice were frozen in time as they poured over a ridge into the sub-glacial riverbed. 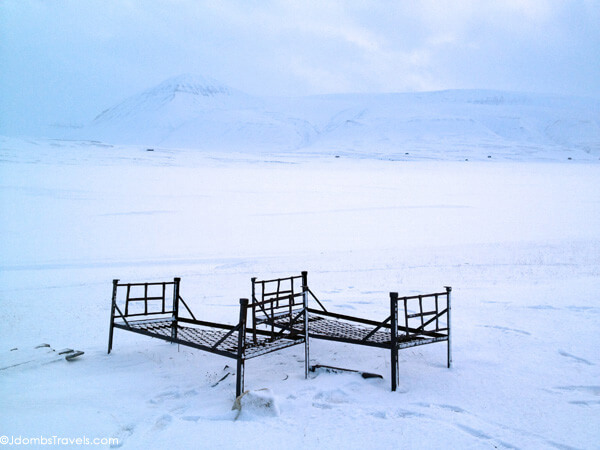 Our final stop our our snowmobile safari across Svalbard was at Jernsenga (The Iron Beds). There are many tales of why the beds were left there, but the Svalbard Environmental Protection Act states that all traces of human activity dating from 1945 or earlier are protected elements of the cultural heritage of Svalbard.Just how serious is the Svalbard Environmental Protection Act? A tourist had recently came across the beds, took a picture lying down on them, and tweeted it. The Governor of Svalbard saw the tweet and fined the tourist for disturbing the vulnerable treasures.

Admittedly, I was disappointed not to have spotted any polar bears on our snowmobile safari. But even so, our day was incredible and we explored parts of Svalbard most tourists cruising to Svalbard never see. Off-road motorized vehicles are prohibited in order to protect this great Arctic wilderness, so visiting the in-land areas we did is only possible in winter by snowmobile.

This snowmobile safari across Svalbard was sponsored by Northern Norway and Visit Norway USA in order to bring you this story. As always, all opinions are entirely our own.