You are here: Home / North America / United States / Taste of Chicago: The Food Festival Not to Miss 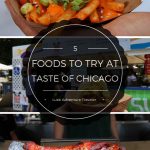 We think that there’s no better way to experience the soul of destination than through its food. It’s probably no surprise to you, then, that we’re super proud Tim’s hometown is a home to the world’s largest food festival: the Taste of Chicago. A veteran of America’s best food festivals, Taste of Chicago has been showcasing the Windy City’s best eats since 1980. Older than even Tim, he’s been countless times over the years growing up there. I’ve only been twice and my visits were 17 years apart, but Taste of Chicago was the fantastic food-filled, eat-until-you-have-a-food-baby event I remember when he took me the year we met.

Taste of Chicago is held for five days every July and it’s the city’s biggest event. Tons of Chicago’s restaurants, food trucks and food vendors set up shop at the free festival to offer tastes of their most popular dishes to foodies of every age. There’s also a variety of activities and events from free concerts, chef demonstrations, special kid’s activities for the tiniest of aspiring chefs and foodies, artists, games and more. In addition to the line-up of free all-day long activities, there is a concert put on each evening by leading artists and a celebrity chef hosting an intimate dinner event for a nominal fee.

Held in Grant Park every year, rows and rows of Chicago restaurants cook up their best dishes for hungry festival goers. The festival itself has free entry, but there is a cost for the food.

Make a beeline for the booths selling tickets, which are basically Taste of Chicago’s own form of currency. The tickets are sold in bunches of 10 and most tastes, mini portions of the food large enough to give you a few bites of the most popular dishes, cost between 5-6 tickets. Of course, if you really love a certain dish the booth typically offers a larger portion on sale for typically double the number of tickets of a taste portion.

You’ll find the iconic Chicago dishes like deep dish pizza with its layers of caramelized, melt-y mozzarella and the neon green sweet relish and yellow mustard topped Chicago-style hot dogs. It wouldn’t be a Chicago food festival without the classics.

But you’ll find some real surprises to.

Think alligator is a southern thing? Apparently, Chicago is the next best thing to New Orleans when it comes to gator. Plenty of restaurants in the city serve up deep fried gator bites. Get ’em cajun or with a side of jalapenos. And if you’re curious but don’t want to commit to a full order, Chicago’s Dog House was offering a taste of gator bites for just 6 tickets. .

We got our Mexican fix, which is one food we really miss as expats, with the slow roasted Cuban pork tamales from Dia de Los Tamales. The taste portion was just 6 tickets and enough for both Tim and me to have a generous couple of bites.

As you might have guessed from my last night, I have some Polish in my family and I grew up eating pierogi. I hadn’t had them in years until a trip to Pittsburgh, and when I saw Kasia’s Deli offering a taste of potato pierogi with sour cream I couldn’t pass it up. I’m not sure Tim had ever even had a pierogi before, but we both enjoyed the taste portion with two pierogi.

I love steamed buns and the pork belly steamed bun from Yum Dum was a delicious bite. The taste portion is just one pork belly stuffed steam bun and Tim isn’t the biggest fan of pork belly, so he was happy to let me devour the entire thing. Worth the 6 tickets. The taste of kimchi fries also looked interesting, though I’ve never been much of a fan of kimchi.

We also really liked the loaded BBQ brisket style turkey nachos from Oak Street Beach Cafe. They weren’t offered as a taste portion, but after seeing – and smelling – a few go by, we opted for a full portion to share.

The Celtic corn on the cob from O’Brien’s has been a long time favorite. You can never go wrong with fresh corn on the cob, and you can have it with or without the Celtic spice.

The lobster roll really should have been sold as a taste portion because it was basically two bites. Ours was dry and didn’t even have any of the tarragon mayo on the roll.

The taste portion of the mac and cheese was larger, though it was still disappointing with not much lobster and it was a bit on the dry side with mainly noodles. Definitely a skip and we really wanted to go down the line and tell people not to waste their tickets.

Perhaps the best value for your tickets is the BBQ turkey leg from Miller’s Pub, a Chicago tradition since 1935. It’s a whole lot of turkey leg and plenty to share when you’re also tasting so many other things. But get there early, because by the afternoon there was consistently a wait of about an hour for the turkey legs.

Each evening of Taste of Chicago, the Celebrity Chef du Jour pavilion features a different James Beard Foundation Award semifinalist, nominee or winning chef. The guest chef prepares a three-course dinner for a small group of guests at this ticketed event.

We attended just one of the five Celebrity Chef du Jour dinners, though we met a Chicago native that had attended every one of the dinners for the last five years since Taste of Chicago has added this event. He told us that he loves going because he gets to try a three-course meal from a variety of the city’s top chefs for a fraction of the price of booking a table in their restaurants.

At just $45 per person for the three-course Celebrity Chef du Jour dinner, our new friend is absolutely right. Plus, the chefs usually feature dishes not on their restaurant menu. As a bonus, the chef greets each and every guest at the event.

We dined on Chef Paul Fehribach’s southern cooking. His restaurant is Big Jones, where he told us his menu is inspired by the people, history and places of the South.

The soiree began with passed appetizers of Chef Fehribach’s famous beaten biscuits topped with green tomato relish, rolled oysters with remoulade and rope baloney with sweet chow on toast. The breaded oysters had a bit too much breading for my liking, but the other two appetizers were really delicious combinations of flavors.

It was really hard to decide between a favorite course because both the first course and main courses were incredible. The first course was sockeye salmon croquettes, which were like mini crab cakes made of salmon, on top of a salad of greens and a mixture of mushrooms, peas and blue barley. It was dressed with tarragon vinaigrette with creme fraiche.

We both devoured every bite of it, which particularly surprised me since Tim really doesn’t like mushrooms.

Mutton in Kentucky black barbecue sauce with hominy cakes followed as the main course. Mutton isn’t really very common in North America, so it was a surprising choice. But the mutton came apart like a slow roasted pulled pork and practically melted in your mouth.

We finished off the meal with a cherry Bavarian cream with almond cookies and chocolate drops. It was just the right amount of sweet to compliment the savory first and second courses.

As media, we got a peek in the kitchen where Chef Fehribach was overseeing the plating of our mutton main dish.

The meal definitely made us want to check out Big Jones, which we sadly didn’t have time for on our whirlwind trip in Chicago. But we’re always back since Tim’s family still lives there, and a meal at Big Jones will definitely be on our list.

Taste of ChicagoWhere To Stay
Taste of Chicago is held for five days every July in Grant Park. Entry is free and you can use cash or credit card to purchase tickets. The Celebrity Chef du Jour and Petrillo Music Shell concerts are additional tickets and should be booked as soon as possible, since these events sell out quickly.

Serious foodies can download the Taste of Chicago app on the App Store or Google Play to plan your visit, add events to your schedule and review the restaurants and food trucks you ate at.

W Chicago City Center is just a short walk down Adams directly to the Willis Tower. A more budget friendly option is the Central Loop Hotel, also on Adams. Both hotels are an excellent location for exploring Downtown Chicago, Millennium Park and the Museum Campus.

Our Celebrity Chef du Jour dinner was provided by the City of Chicago Department of Cultural Affairs and Special Events in order to bring you this story. However, Luxe Adventure Traveler maintains full editorial control of the content published on this site. As always, all thoughts, opinions, and enthusiasm for travel are entirely our own. This article contains affiliate links. When you book on Booking.com through our affiliate site, we earn a small commission at no additional cost to you. It just helps us keep things running here at Luxe Adventure Traveler!