You are here: Home / Europe / United Kingdom / Tower of London 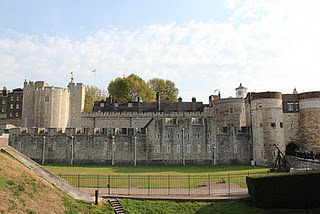 The Tower of London, with its 900 years of history, has earned itself a multitude of spine tingling stories, mainly due to its infamous reputation as a place of execution. There are many stories of ghosts, poltergeists and other malevolent spirits connected to the Tower of London. Who hasn’t heard the one about the headless apparition of Anne Boleyn stalking the Tower grounds at night or stories of the chained and headless Sir Walter Raliegh being seen on the ramparts close to where he was kept prisoner? One of the thirty-six Yeoman Warders that guard the Tower and live there may just take you on a tour and tell stories of the Tower’s many famous prisoners. The Yeoman Warders are also popularly known as the Beefeaters most likely because the Warders’ payment was in rations that included beef, mutton and veal, and various historical commentators have noted a preference for beef among the Warders and the Yeomen of the Guard.

Another of the Yeoman Warders is the Ravenmaster, who takes care of the Tower’s most celebrated residents: a colony of seven ravens. Legend has it that should the ravens ever leave the Tower of London the White Tower will crumble and a great disaster shall befall England. Ravens were not the only creatures to reside at the Tower. In 1235, King Henry III received three lions from Emperor Frederick II. The Emperor had just married Henry’s sister Isabella so this gift was a sign of their alliance and friendship.More exotic animals were to follow such as ‘a white bear’ (believed to be a Polar bear) from King Haakon of Norway in 1252 and a male African elephant from King Louis IX of France in 1255. Visiting the exotic animals at the Tower was a popular excursion and the only way that most people could see such creatures they would normally only have heard about in stories. Today the only live animals that remain are the ravens. Recreating the menagerie of various exotic animals in sculpture form, visitors can see lions, monkeys and all kinds of exotic beasts as you roam the Tower’s rooms. Of course, one of the highlights of the Tower of London is the Jewel House, which holds the Crown Jewels. The Crown Jewels are the regalia of crowns, scepters, orbs, and swords used at coronations and other state events. Most of the Crown Jewels date from 1661 when a new set was made for the coronation of Charles II. Parliament had destroyed the previous crowns and scepters after the execution of Charles I in 1649 and only a few pieces survived which had been hidden by the clergy of Westminster Abbey. The Crown Jewels contain some of the most famous diamonds in the world. The  First Star of Africa, now mounted at the top of the Sovereign’s Scepter, is the largest cut diamond in the world. The Imperial State Crown alone has 2,868 diamonds, 273 pearls, 17 sapphires, 11 emeralds and 5 rubies.