You are here: Home / Europe / Germany / A Wild Trabi Safari Around East Berlin 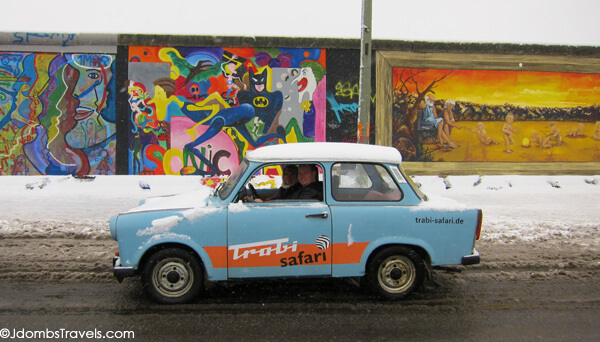 Driving our Trabi along the East Gallery

Produced by former East German auto maker VEB Sachsenring Automobilwerke Zwickau, the Trabant was the most common type of car in East Berlin during communist times. Tim and I piled into the Trabant (often referred to as a Trabi) and went on a Wild-East Trabi Safari, which took us almost entirely through the former East part of the city. 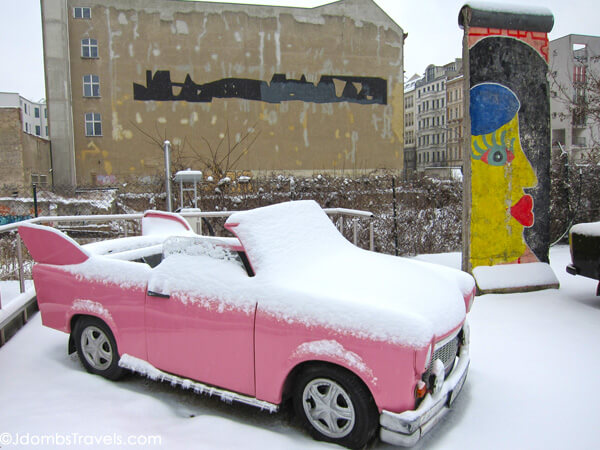 Great day for a convertible. Not!

All bundled up, the Trabi Safari guides joked “Great day for a convertible!” as they pointed to a little pink Trabi covered in snow. Had the snow not still been coming down steadily, I just may have braved the cold to bop around the city in such a cute little convertible.

In 2008 Time magazine rated the Trabant as one of the 50 worst cars ever made and as I climbed in on a very snowy morning, I questioned whether I was going to live to even tell this tale. Okay, maybe I’m exaggerating a wee bit. There was a notoriously long wait to get a brand new Trabi; the average wait list was 8 – 10 years. Once East Berliners finally received one, they treated their Trabi gently and were meticulous in maintaining and repairing them. 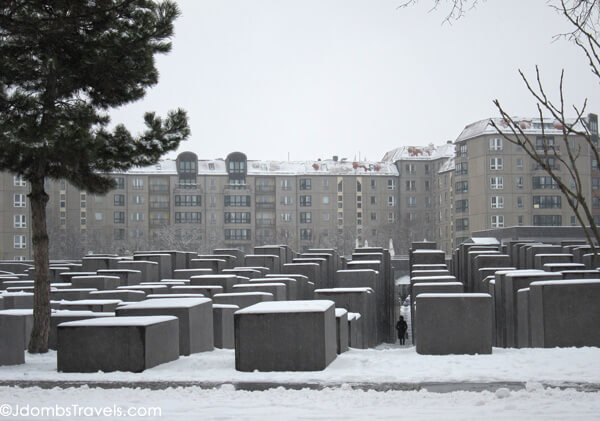 How different the Holocaust Memorial looked under a few inches of snow from when we walked between the concrete pillars the day before. Just a little more ominous; the 2,711 concrete stelae a reminder of the Jewish victims of the Holocaust. 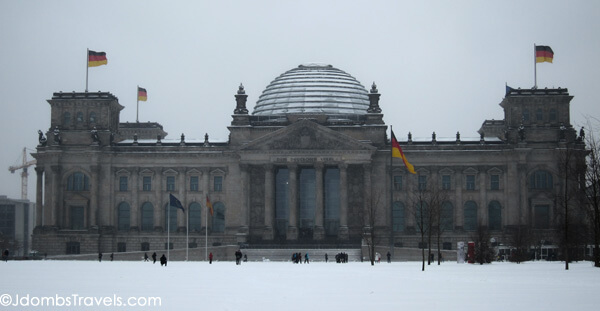 We zoomed past the Reichstag, Tim finally getting up to fourth gear. Built in 1871, it fell into disuse after World World II and didn’t undergo a restoration project until after the Berlin Wall fell. The Reichstag finally became the meeting place of the German parliament again in 1999. We idled at a light on the Unter den Linden and laughed as the voice crackled over the radio: “Zero to 100 kilometers per hour in 21 seconds!” And we were off, puttering along toward one of Germany’s most well-known landmarks, the Brandenburg Gate. Commissioned by King Frederick William II of Prussia in the 1730s, the Brandenburg Gate was one of 18 gates inside the Berlin Custom’s Wall. It’s the only remaining gate to the city. Tourists snapped photos as our convoy of six Trabis cruised side-by-side down the Unter den Linden. The Berliner Dom to our left, Tim hit the gas and we were headed straight for Germany’s tallest building, the TV Tower. A revolving restaurant is located in the glass ball and completes a revolution twice per hour. “If we continued on straight for 1000 kilometers, we’d be in Moscow,” came the voice over the CB radio.

Some heads by Thierry Noir 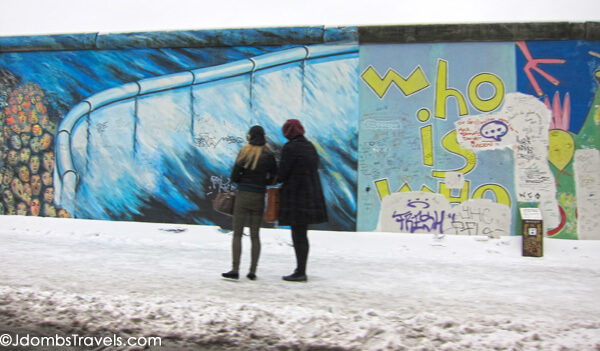 Finally the East Side Gallery, the longest remaining stretch of the Berlin Wall at 1.3 kilometers in length, came into view and we made a left to drive along it. 105 paintings from artists all over the world cover the East Side of the Wall, which were painted in 1990 after the fall of communism. Sadly, many of the paintings are badly damaged by erosion, graffiti, and vandalism. And a 23 meter section is supposed to come down this month to make room for luxury apartments to be built. 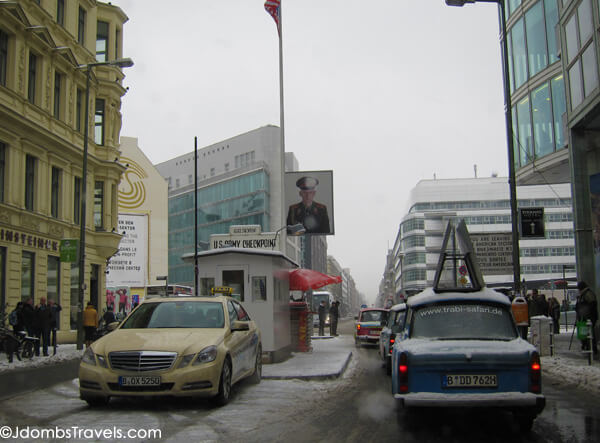 Appropriately our Trabi Safari ended just after we passed through Checkpoint Charlie, the best known Berlin Wall crossing. Our Trabi Safari around East Berlin was a fantastic way to see a lot of the city’s landmarks and a really fun and unique way to experience Berlin!

Thank you to Trabi Safari for hosting us on the Wild East Trabi Safari. As always, all opinions are entirely our own.