The vineyards of the Valpolicella are tucked between Verona and the shores of Lake Garda. Once with a reputation for churning out wine so cheap it was only suitable for ordering at pizzerias, the Valpolicella now produces some of Italy’s finest reds. So when we wanted to discover the wines of the valley of many cellars, we headed for not only the best wine maker in the Valpolicella, but one renowned as a leading wine producer in Italy and in the world. The Allegrini family has been a leader in wine making in the Valpolicella since the 16th century and has handed down the traditions of wine making for generations, seven to be exact. Franco and Marilisa Allegrini now run the Allegrini Estates, which produces 900,000 bottles each year, and have elevated the company to be one of the most prestigious producers in the region. Posing in front of the giant barrels

Our tour of the Allegrini Estates began behind the giant doors of the barrel room, where the fragrant scents of Allegrini’s wines tempted us as we learned about the region and the estate. The vineyards stretch out in two directions, east to Verona where these are younger vineyards and to the west to Lake Garda, which is known as the Valpolicella Classico area. The rows of barriques stretching before us in the cool cellar were introduced to the aging process by Franco as recently as 1995. Amarone is only aged in brand new barriques and then finishes its aging process in 40 year old barrels from Slovenia. 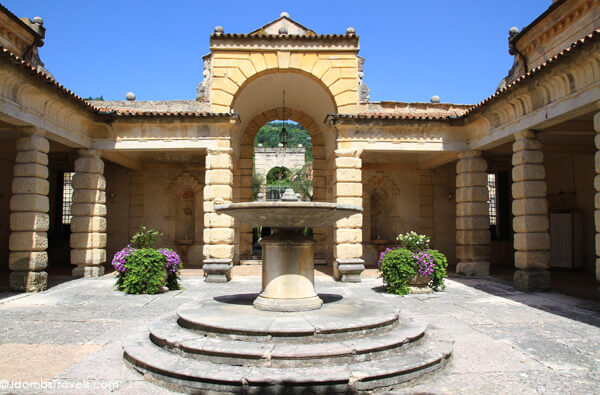 Allegrini believes a fine wine is best understood when it is meditated on, and as lovely as the barrel room was, our tour continued at the beautiful Renaissance Villa della Torre. The complex is extraordinarily picturesque and surrounded by vineyards. The Peristyle, or courtyard is the heart of the villa, and like the domus antiqua of ancient Rome, it welcomed us as soft music played and water gurgled from the fountains. Outside the courtyard, lily pads with yellow flowers bloom on the fish ponds and make for a tranquil setting for visitors to enjoy more of the fountains. The water symbolizes good in the ever present battle between good and evil in Renaissance architecture and also sustains all of the irrigation needs for the gardens and flower beds. An almost terrifying face in the Nymphaeum

Below the fish ponds, the mysterious Nymphaeum, or Cave of Mysteries, is almost concealed. It served as a Roman bath and forbidden dealings between the Europeans and Muslims took place. Through the other side of the courtyard, the perfectly preserved bell tower rises up behind the small chapel, where weddings are still held today. A massive restoration project is also underway in the small chapel and throughout the villa, as the walls were white washed and evidence of beautiful frescoes has been found buried beneath the layers. 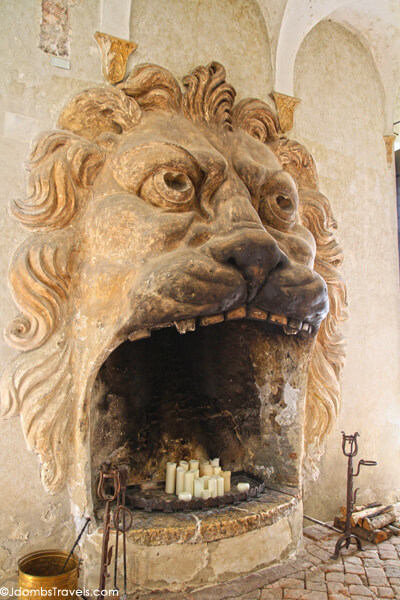 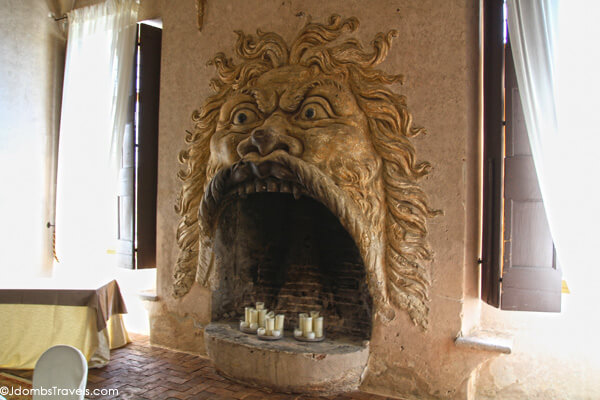 Inside, I am most struck by the four incredibly artistic fireplaces. Gargoyle-like figures of a lion, devil, fish, and an angel adorn the rooms. Our private wine tasting is set-up in front of the Angel’s Fireplace, and though it is far too hot outside to enjoy an actual fire, we enjoy the ambiance none-the-less. No whites are produced in the Valpolicella, but Allegrini Estates has vineyards in Tuscany as well. We begin our tasting with a while Solosole 2012 Poggio al Tesoro. The acidity tingles on the tongue, tantalizing the senses. It has a hint of spice and nuttiness.

Moving to the reds, we tried the Palazzo della Torre, named after the villa. It is the most sold of the Allegrini wines in the United States and is world famous because of its complexity. It has been included six times on the Wine Spectator’s list of the Top 100 Wines. It’s a blend of 70% Corvina, 25% Rondinella, and Sangiovese. Earthy, yet tastes of plum, cherry, and sweet blackberries, and is a very elegant wine. It can easily be enjoyed with or without food.

La Grola 2010, another blend with the dominant grape being Corvina, followed. This wine is produced from grapes in Allegrini’s vineyards closest to Lake Garda and has a bouquet of wild berries and tobacco. It’s a bit more intense than the Palazzo della Torre and would be best enjoyed with food like roasted meats or aged cheeses, like the Grana Padano we paired it with.

The 2008 Amarone has a spicy bouquet reminiscent of raisins, and for a reason. The grapes are dried for four months and loose about 40% of their water during this drying process. It has a slow fermentation process and is aged for 18 months in only new barriques. Amarone is then aged for 12 more months in barrels and an additional 12 months in the bottle. A four year old Amarone is ready to drink now, but will age beautifully for years to come.

We finished up with a sweet red, Recioto, that shares the same technique as Amarone but is aged for five months instead of four. Fermentation comes to a natural stop before all the sugars have been transformed into alcohol.

Usually during a tasting, we really like only 2 – 3 wines enough to bring them home with us. At Allegrini Estates, we liked all of the wines so much, it was almost hard to chose which we would be adding to our collection. In the end Amarone, Palazzo della Torre, and the white Solosole 2012 Poggio al Tesoro each found a place on our shelves.

Thank you to the Allegrini Family for hosting us for a tour and tasting at the Villa della Torre. As always, all opinions are entirely our own.