You are here: Home / Europe / Italy / Wine Wednesday: Dinner Amongst the Vines

I was absolutely starving. We had been wandering around the Roman Ruins and lakeside town of Sirmione all day in the heat. Every restaurant menu in Sirmione featured fish and seafood, presumably not fresh from the lake since I’ve never heard of a lake squid, at nearly triple the price I’ve seen anywhere else in Italy. Tim suggested we just head back toward the agriturismo we were staying at, which didn’t have a restaurant, and look for another agriturismo on the way to have dinner at. “There’s a sign for one!”, I exclaimed. Tim quickly flipped the car around – we’re always making crazy u-turns for agriturismi – and a couple minutes later we arrived at Cascina Capuzza. Cascina Capuzza is an ancient farmhouse that dates back to the 15th century. It’s amazing that it survived because the farmhouse is located right in the heart of a battlefield where the battle between San Martino and Solferino took place in 1859. It was the largest battle since Leipzig in 1813 and the Piedmontese army defeated the Austrian army, re-securing the region from Austrian grip. 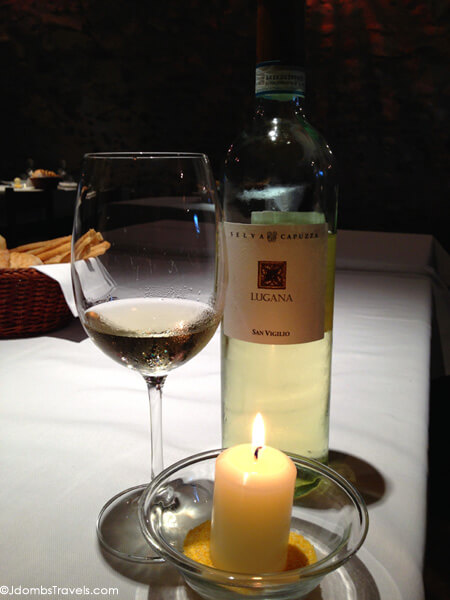 As we wandered the grounds with a glass of Prosecco in hand and escaped the blazing sun in the rows of vines, not knowing the history, you’d never guess such a bloody battle took place here. Today, it is incredibly romantic. The sun was slowly sinking lower and lower in the sky, literally illuminating the leaves and grapes on the vines. In summer, dinner is served at candlelit tables are set under the ancient mulberry trees surrounded by the vines. Cascina Capuzza focuses on the seasonal and local ingredients, with a tasting menu of several courses paired with wine produced by the Formentini family’s fourth generation of wine makers. Our wine and culinary journey began with a selection of appetizers paired with a bottle of Lugana San Vigilio, a white wine with a crisp, fresh finish. The appetizers were simple, yet delicious: a salad of green apples, fennel, and carrots drizzled with balsamic; cold rice salad with mushrooms and beans; a platter of proscuitto and mortadella with cheese; and bruschetta topped with tomatoes and eggplant. Two homemade pasta dishes followed, one vegetarian with carrots and zucchini and the other a tortellini with zucchini, mushrooms, and proscuitto cotto. The different courses changed the delicate palate of the Lugana San Vigilio, bringing out the citrus and apple tastes of the 100% Turbiana grapes. Our platter of grilled meats like sausage, chicken, thinly sliced beef, and spare ribs were delicious paired with the red Garda Classico Rosso Dunant. The red is a blend of Groppello, Marzemino, Sangiovese, and Barbera. It has juicy cherry flavors, perfect with barbecue and grilled meats like we were enjoying it with. Our meal finished with a glass of Prosecco with a selection of desserts including tiramisu, tortes, and a brownie.