You are here: Home / Europe / Iceland / A Walking Tour of Reykjavik, Iceland

A Walking Tour of Iceland’s Capital

There is really no better way to discover the small, compact Icelandic capital of Reykjavik than on foot. A mix of traditional and modern reveal the eclectic charms of the city. 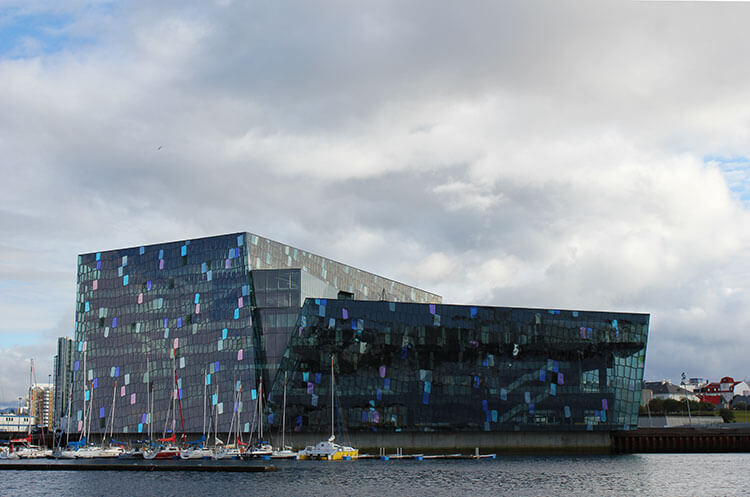 Harpa had just opened shortly before our first visit and brief time living in Iceland in 2011, after several years of the project being halted due to the Icelandic financial crisis. Inspired by the basalt landscapes and Arctic light of Iceland, the building was designed by the artists Olafur Eliasson and Henning Larsen Architects and the multi-colored glass panels glitter in the sun.

Harpa hosts a number of shows and concerts, including the one-man comedy How to Become Icelandic in 60 Minutes that is now in its sixth successful year.

If a show or concert isn’t your cup of tea, you can also take a 30-minute guided architectural tour of Harpa for a look inside. Of course, it’s a beautiful contemporary building to photograph on Reykjavik’s harbor whether you actually visit it or not.

Harpa makes an excellent starting point for an easy and self-guided walking tour of Reykjavik to see the city’s sights and monuments. Walk along Lækjargata Street, where some of Reykjavik’s oldest houses stand, to the Government House. It’s the current office of the Prime Minister of Iceland and an important spot for Iceland’s modern history.

The Danish government announced in 1904 that Iceland would be granted home rule. That announcement happened on the steps of the Government House and the Icelandic flag was hoisted up in front of the Government House for the first time. Iceland didn’t officially gain their independence from Denmark until 1918, but the building has officially been the government offices sine that day in 1904. The two statues in front are of Danish King Christian IX handing over Iceland’s first constitution in 1874 and of Hannes Hafstein, Iceland’s first prime minister in 1904.

Turn left at the Government House and walk uphill along Laugavegur Street. The longest shopping street in Reykjavik was actually once the route that Icelanders took to the hot springs to bath and wash their clothes, giving the street its name. The name “Laugavegur” translates to “Wash Street”. These days, it’s lined with Iceland’s coolest shops and bars. Design shops and clothing stores are bookended with hip cafes that you can come in out of the cold for a hot drink at.

Many shops along Laugavegur Street sell the lopapeysa, or Icelandic wool sweater, which is a favorite of visitors to bring back home with them. I have two of them, myself! You’ll see many Icelanders wearing the traditionally patterned lopapeysa and though the sweaters definitely look fashionable, they’re functional and well worth their expensive price tag. The yarn used is called lopi and is made from the wool of those cute Icelandic sheep you’ll see wandering about the countryside. Lopi isn’t spun, so it contains more air than spun yarn and is incredibly insulting, keeping Icelanders warm.

I don’t make a trip to the Arctic without packing my Icelandic wool sweaters, socks and long underwear.

Running from the corner of Laugavegur Street is Skólavörðustígur Street, which Icelanders proclaim the most beautiful street in Reykjavik. Walk along Skólavörðustígur up to the Hallgrímskirkja church, Iceland’s tallest building and most striking church. The church is named after the Icelandic poet and clergyman Hallgrímur Pétursson and the three bells in the bell tower represent Hallgrímur, his wife, and their daughter who died at a young age.

The statue in front of the church is of Leif Eríkson, an Icelandic/Norwegian explorer and the first European thought to have landed in North America. The monument was a gift from the United States for the 1930 Alþingi Millennial Festival, which marked the 1000th anniversary of Iceland’s parliament.

The bell tower is accessible via an elevator and awards views over the colorful city and harbor. 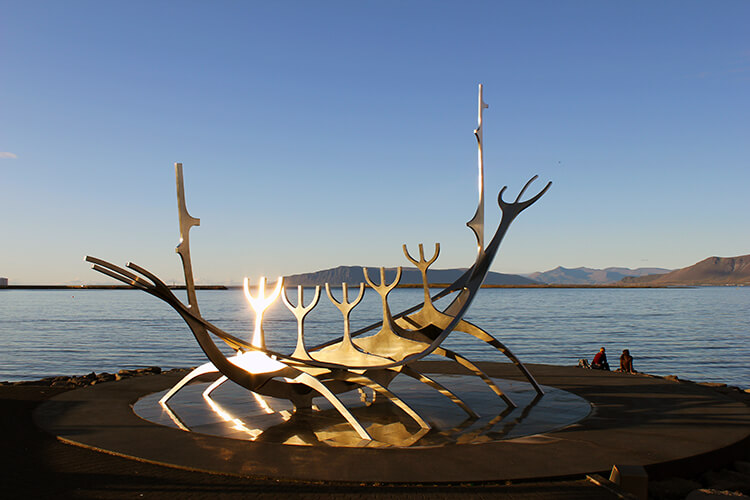 The Sun Voyager sculpture in Reykjavik

From the Hallgrímskirkja turn on to Frakkastígur Street and head back toward the water. At Sæbraut, the stunning Sólfarið (or Sun Voyager) sculpture comes into view. Made in 1971 by Jón Gunnar Árnason, it is a massive steel creation made to resemble a Viking ship floating on water.

Continue along the waterfront back in the direction of the Harpa. Stop by Bæjarins Beztu Pylsur, which translates to the “best hot dog stand in town”. The hot dog has been called the Icelandic national food and these are special. Made of lamb and topped with a mix of fresh and fried onions, remoulade and brown mustard, they’re unlike any hot dogs in the world. It’s no wonder even Bill Clinton and James Hetfield of Metallica have even eaten here.

After refueling on a few hot dogs, continue on to Lækjartorg (Brook Square) to admire the brightly colored buildings lining the square.

Austurvöllur is Reykjavik’s oldest square. The square was originally part of the hay fields of the city’s first settler, Ingólfur Arnarson. In the center of the square is the statue of Jón Sigurdsson, the Icelandic nationalist who led the country to independence from Denmark. The present parliament building, Alþingishús, which moved from Þingvellir in 1881 can be seen.

Across the street and adjacent to the Alþingishús is Reykjavik’s oldest church the Domkirkjan. It was here at the Domkirkjan that Iceland’s national anthem was first sung in 1874.

Venture up Túngata to find the Catholic church Landakotskirkja, which was also designed by the same architect that designed the Hallgrímskirkja. It is a Neo-gothic church with a distinctly flat top as opposed to the standard spire.

Finish the walking tour at Tjörnin Pond to feed the ducks, swans and geese. 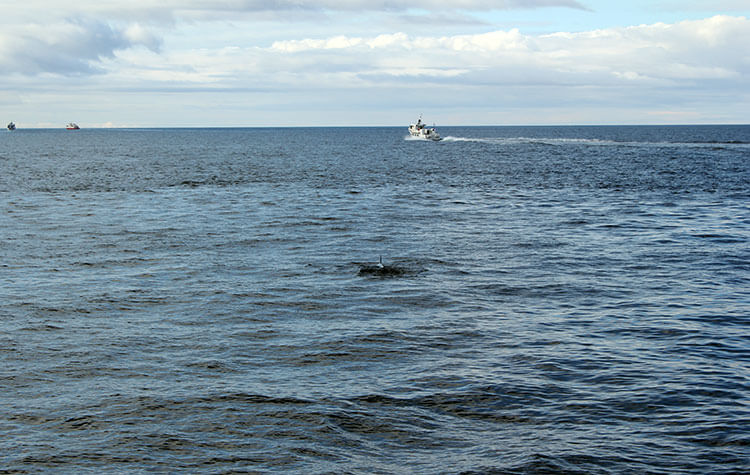 Whaling has a long history in the coastal waters around Iceland. After centuries of over exploitation, whaling was halted as recently as 1989. Whale watching in Iceland is still a relatively new tourist attraction with trips beginning just over 20 years ago in 1995.

We headed out of the Reykjavik Old Habour on the NÚMI with Sjosigling, a traditional Icelandic oak fishing boat that has been modified for whale watching and sea angling. Since there is no glass enclosing you on the boat, blankets are provided to bundle up in. We were lucky to have a calm, sunny day.

There are few places in the world where you can find as many species of whales so close to shore as in Iceland. These include blue, fin, humpback, minke, and even orcas. On our own whale watching trip, we were lucky to see minke whales and a pod of white-beaked dolphins. 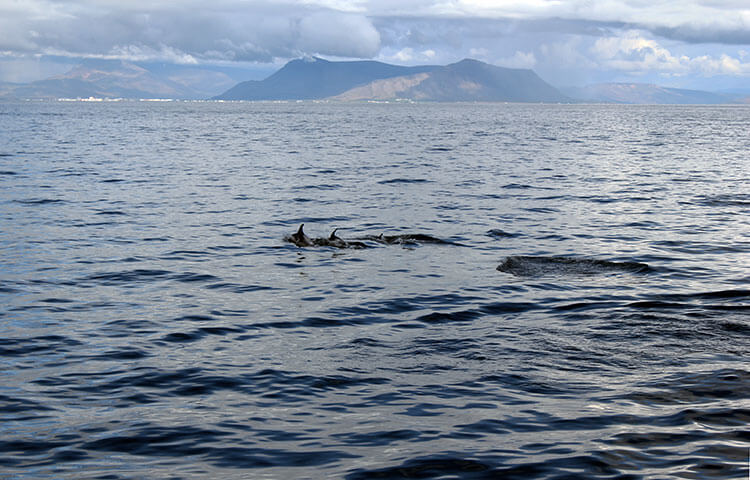 A pod of white-beaked dolphins play in the water

Minke whales are the smallest baleen whales and also the most abundant. White-beaked dolphins are attracted to boats and often bow ride. Most whale watching boats have a 100% success rate of seeing both minke whales and white-beak dolphins.

On the way back, the NÚMI’s engineer, who is an excellent cook, prepared fish soup to warm up with while we sailed back. You can also visit the Sjosigling Bird Museum for free if you go whale watching with them.