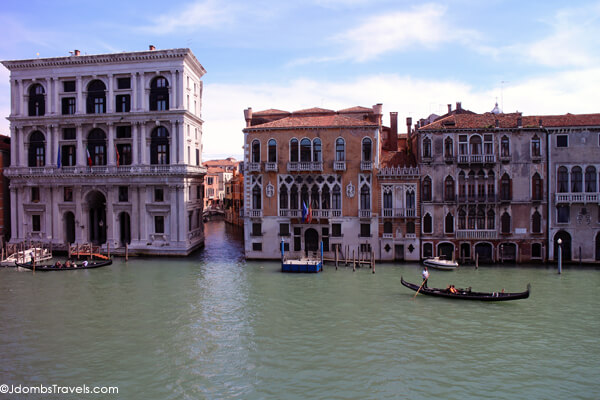 San Polo, one of the oldest parts of Venice and also the smallest of the six sestieri, is known for its beautiful palaces. Since 1097, San Polo has been the place to see and be seen in Venice. After all, the San Polo district is steps away from the Rialto and Venice’s main market scene frequented by chefs and locals alike. It’s no surprise, then, that when the noble Coccina family of Bergamo moved to Venice in the 16th century, they commissioned a palace to be built in San Polo right on the Grand Canal. Today that beautiful residence, known as the Palazzo Papadopoli, is the exclusive 24-room Aman Canal Grande.

As with most palazzos throughout Italy, ownership of the Palazzo Papadopoli has changed hands many times since the Coccina family called it home. In 1864 it became the seat of the brothers, Count Nicholas and Angel Papadopoli and then passed to the heirs of Papadopoli in 1922, the noble family Arrivabene Valenti Gonzaga. The family still lives there on the top floor and the rest has been rented out to Aman Resorts. 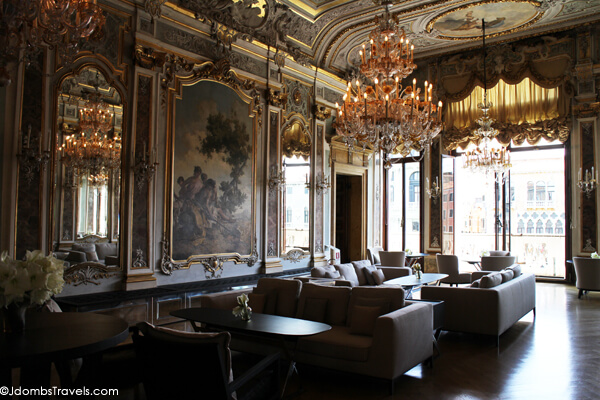 Arriving by foot (most guests will arrive by boat transfer from the airport or train station right to the palazzo’s private dock), was like arriving at someone’s grand home. I rang the bell and was buzzed in by way of one – they have two – massive private gardens. With real estate on the Grand Canal at a premium, these oases in the heart of historic San Polo are truly something special. Stepping through the door into the grand reception area, there is no check-in desk or concierge desk of  any sort. It truly feels am though we’ve come for a visit at a luxe private palazzo. 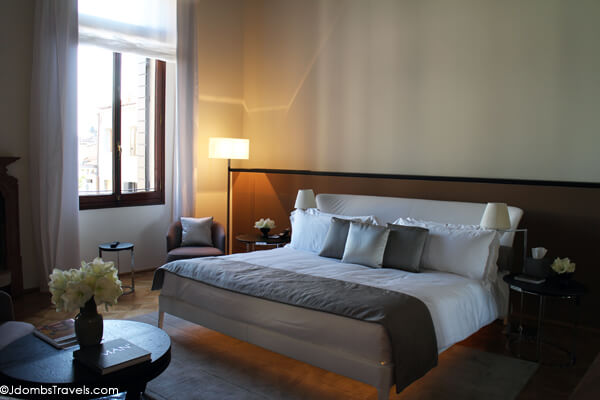 Aman Canal Grande has just 24 suites and the Palazzo Stanza suites all offer views over the Grand Canal. The staff enthusiastically tells us that the Papadopoli Stanza is the very best room in all of the hotel as the doors are swept open for us. It offers views over both the Grand Canal and the garden. Original Tiepolo frescoes adorn the ceilings in both the bedroom and the bathroom. The stucco is gilded, the radiators are crystal, and a discreet black tassel hangs near the door to be used as a do not disturb sign. 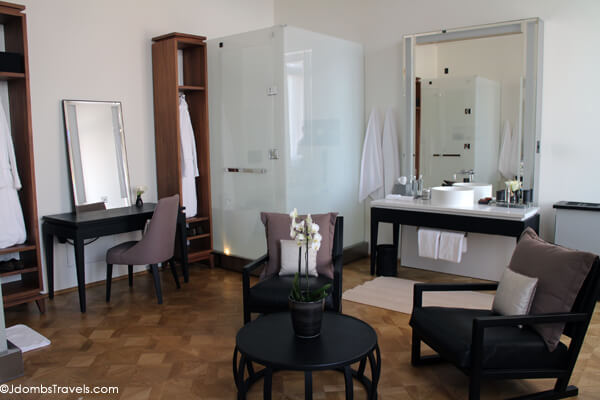 Though the bedroom with king size bed and fireplace is inviting, my favorite area of the suite is the bathroom. The large tub just beckons for you to relax in a bubble bath while drinking in the canal views. There is a separate rain shower, double vanities, a dressing table, and a central seating area that really looks perfect for curling up with a good book in the solace of your chamber. 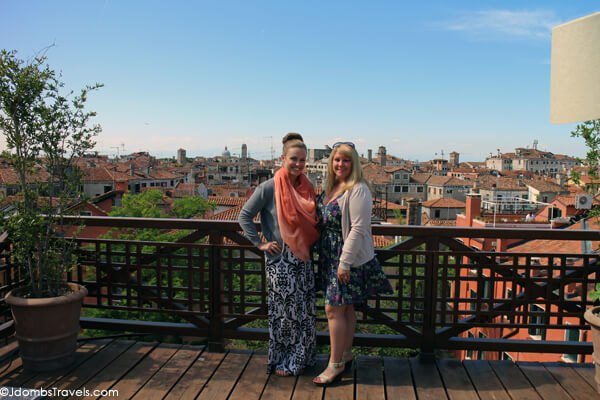 Up on the fifth floor, I step up onto the traditional altana – a rooftop terrace with stunning views of the terracotta-colored chimney pots and belfries. It’s a clear day and I can see all the way to the still snow-capped Dolomites. It is seriously one of the best view of Venice I’ve ever seen (and I’ve climbed a few belfries in Venice). It’s a perfect spot for relaxing with a cappuccino in the morning or one of Aman’s signature cocktails at sunset. 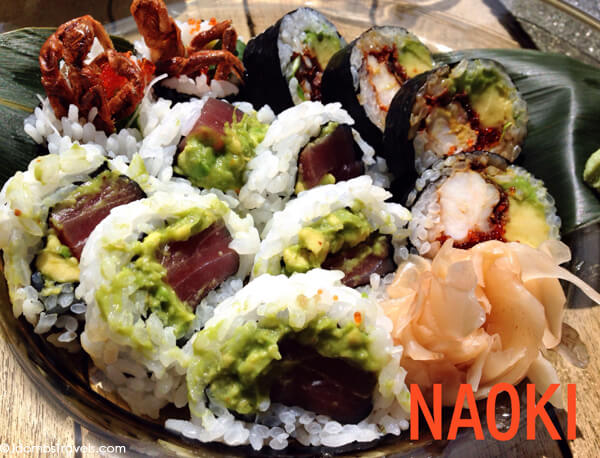 Aman Canal Grande has two restaurants – unsurprisingly, an Italian restaurant and a Japanese restaurant, which has just opened in the canal-facing garden for the summer only days ago. The Italian menu is served in the opulent red and yellow dining rooms, with canal views of course.

Naoki is the creation of Chef Naoki Okumura, chef-owner of the acclaimed Okumura in Kyoto, Japan. He calls his style of cuisine “kaiseki”, a combination of the best French techniques with Japanese artistry. Days later I’m still drooling over the memory of the meal. 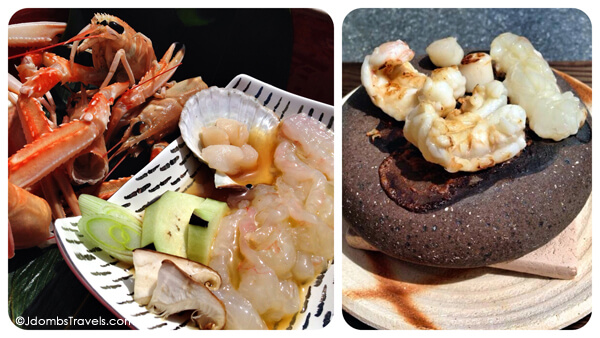 We started off with soft shell crab and spicy tuna with avocado sushi rolls (€22 each), which were plentiful. It was the best sushi I’ve had in ages, so it’s a good thing we only live a short train ride from Venice (or perhaps that’s a bad thing…). At our server’s recommendation, we also shared the king prawn tempura served with a hot soy dipping sauce and the grilled scampi. What I particularly loved about the grilled scampi is that you cook it right at the table on a sizzling hot stone. What I didn’t love about the scampi was the portion size, which I felt was a bit small for €38.

We could pass up something sweet to curb the saltiness of the Japanese food and I was delighted that my pear and chocolate sorbet was served in an edible chocolate cup. 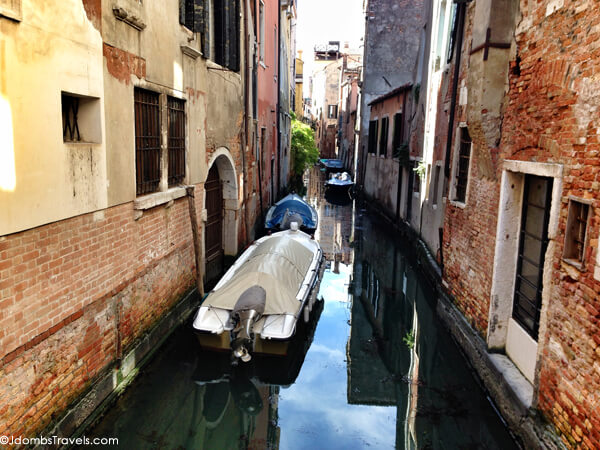 Aman Canal Grande plays down everything hotel-like. In the midst of sheer opulence, the sumptuous palace feels as cozy and welcoming as a private home. With just 24 suites, there are plenty of richly decorated common areas throughout the palazzo to find your own space. And while inside the palazzo, you completely forget the hustle and bustle of Venice’s busy calle happening just beyond. Aman Canal Grande is priced accordingly for a 7 star hotel with rates from €1150 to €3650 per night.

Our visit and lunch was hosted by Aman Canal Grande in order to bring you this story. As always, all opinions are entirely our own.