Iceland is full of hidden gems and the Land of Fire and Ice never fails to surprise you. Grjótagjá is one of those places. Looking like merely another rift in the ground and often nearly impossible to find when the this natural geothermal spring is blanketed in fog from the surrounding geothermal field or covered with snow, the cave is a magical place you won’t ever forget. 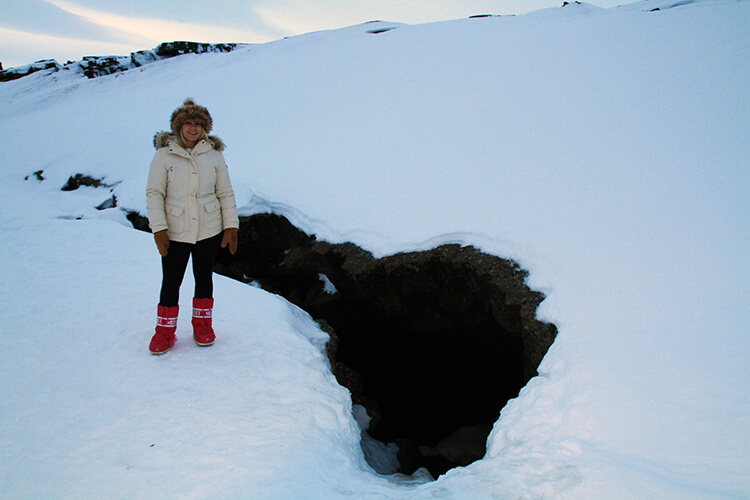 Grjótagjá can be hard to find, especially in winter

We’ve been to the Blue Lagoon and the Mývatn Nature Baths in Iceland. Both are fantastic and must visit attractions when in Iceland, but there’s just something extra special about soaking in a natural geothermal spring or hot pot. We learned about Grjótagjá, a natural geothermal spring in a cave, from our guide on our Lake Mývatn tour with Saga Travel. Our local guide is a regular Grjótagjá bather and encouraged us to come back and give it a try ourselves. 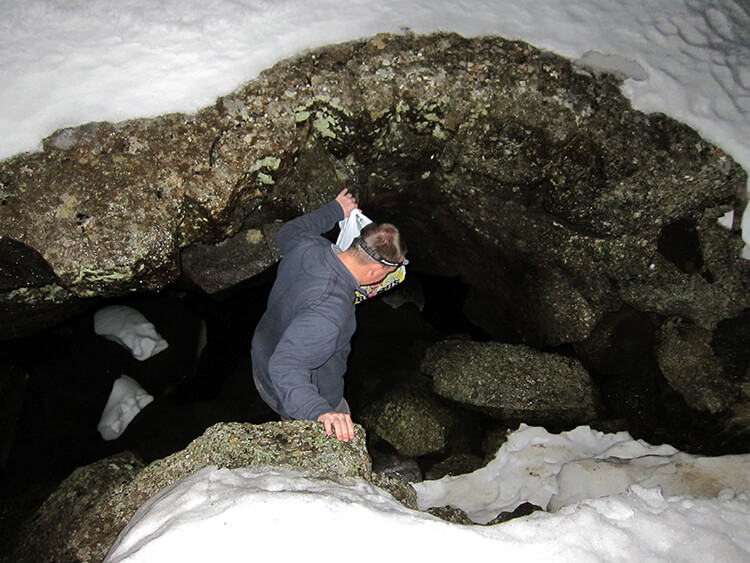 Tim climbing down in to the men’s cave at Grjótagjá

Grjótagjá is a small lava cave and the thermal spring is inside. The water is heated from volcanic activity deep within the earth. Bathing in the cave dates back to the 18th century when the Icelandic outlaw Jón Markússon lived in the area and bathed there. Until the 1970s many Icelanders bathed at Grjótagjá, men in one cave and women in another. The Krafla eruptions from 1975 to 1984 caused the water in the cave to rise above 50°C. Water temperatures forced the “closing” of the caves. The water temperature did eventually return to a more suitable degree in the ’90s and bathing has resumed in the men’s cave.

Grjótagjá did get its 15 minutes of fame when Jon Snow sealed the deal with Ygritte in Game of Thrones Season 3, so if you’re a fan of the show the cave should definitely be on your Iceland Game of Thrones filming locations bucket list.

It was already dark when we arrived back at the cave, since Icelandic winter days are so short. Tim put a headlamp on and we clambered down the snowy, icy entrance into the cave. A few of the rocks had snow on them, but mostly the steam kept the cave toasty warm. We quickly undressed and eased ourselves into the hot water. At 43°C or 109°F, it was easy to quickly forget that the wind was howling and it was snowing outside. 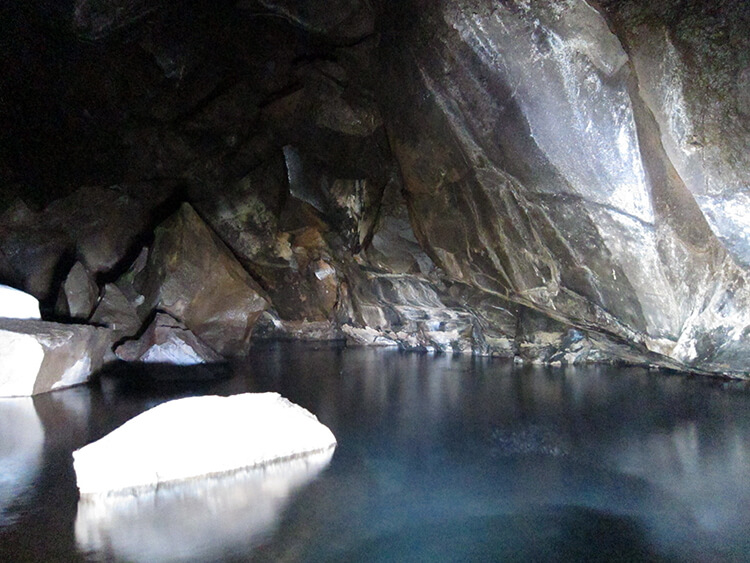 After a few minutes of wondering if it was really a good idea to be inside a cave in a country with 130 volcanoes and New Year’s Eve predictions that a huge eruption is imminent when no one knew where we were, the steamy hot water did its job and eased my tensions away. Holding up our little head lamp, we took turns swimming off the ledge and exploring the cave a bit. It was actually quite large inside and we estimated that probably 100 people could fit comfortably inside. 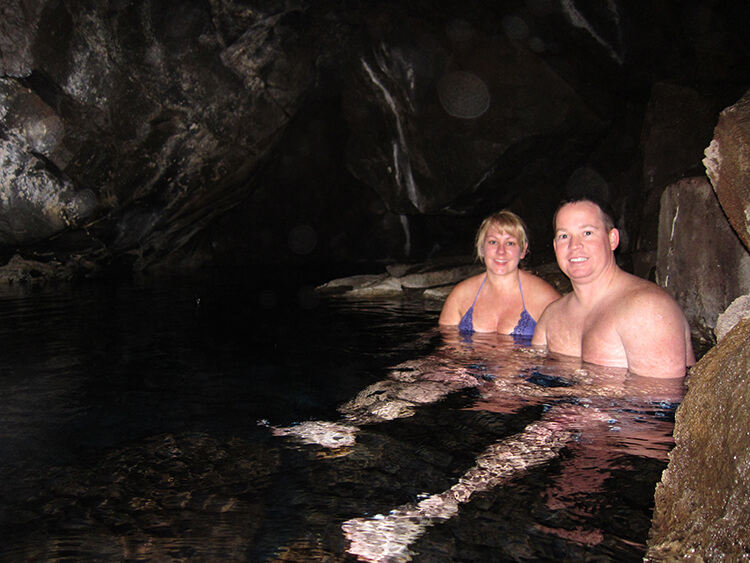 After a while, the beam of headlights reflecting off the snowy entrance to the cave alerted us that we were about to have company. I thought for sure that we would have the cave to ourselves. But soon enough two Icelanders quickly descended into the cave and disrobed. It was immediately clear that they bathe at Grjótagjá regularly; their speed with getting down into the cave was impressive and they knew just where to wedge two torches into the cave ceiling. The routine seemed to be soak and chat, swim off behind your own rock, shampoo up, dunk to rinse, and then relax on the rocks.

While nude bathing isn’t very typical in Iceland, the locals that joined us did strip down to their birthday suits. So don’t be surprised if you see locals using it like their bath tub at home.

The locals like to keep Grjótagjá somewhat secret, though our guide encouraged us to give it a try since we were staying nearby at Vogafjós Guesthouse. But you won’t find a bath in Grjótagjá cave on any tour.

*Note that we have received reports that bathing is prohibited at Grótagjá since we were last there for the second time in 2014. We have not been able to confirm this, though we suspect people may be finding the women’s cave which did have a sign even back when we first visited in 2013 that it is too hot to bathe in. At the time we bathed in the cave, the men’s cave was a suitable temperature for bathing and used by locals.

How To Get ThereTips
Drive east from the village Reykjahlid (Road #1) for a couple of kilometers and then turn right just before you reach the road to Myvatn Nature Baths. There is a road sign with the name “Grjótagjá” pointing to the gravel/sandy road that takes you to the caves.