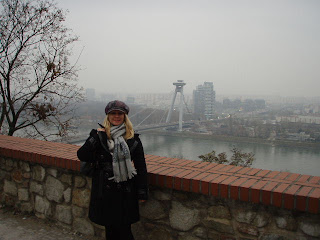 Arriving in Bratislava, the capital of Slovakia, was like taking a trip back in time to the 1980’s Soviet Union. Bratislava, much like Budapest, is divided by the River Danube following through the middle of the city. Driving from Vienna, we came upon the rows and rows of the Communist era gray concrete apartment buildings (look closely in the background for the rows of buildings). Some were painted multicolor now, others left to their original state. Bratislava and Vienna are the two European capital cities closest together at only 60km (37 miles) apart. It is truly amazing that the two cities can only be one hour drive, yet worlds apart. 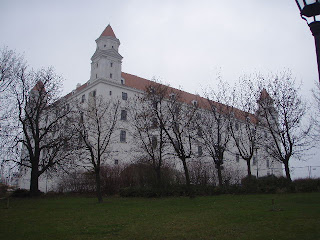 Crossing the river over the New Bridge, I didn’t get the immediate impression the other side of the river was much better. Our hotel was located on the hillside literally next to Bratislava Castle, so we hiked up the hill to the Castle. The site was inhabited as far back as Celtic and Great Moravian times and stands on the hill of the Little Carpathians directly above the Danube river. The Castle is currently under reconstruction but does house the expositions of the Slovak National Museum. A Baroque building which was formerly a stable now houses the famous restaurant, Restauracia Hrad, where we enjoyed a lunch of Slovakian hamburgers and pommes frites.

We headed back down the hill to the Main Square, where the Christmas Market was just opening for opening day. An Advent tradition, the market offered Christmas cabbage soup, the unique taste of smoked sausages, dried mushrooms, dried plums, and red paprika. The scents of hot mulled wine drifted around the square. This market was far more crowded than the Vienna market, making it nearly impossible to push through the crowds. 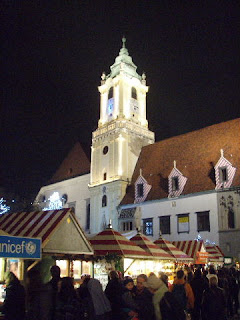 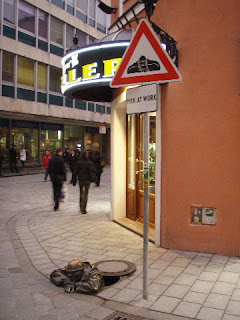 We came upon the statue of Rubberneck on Panska and Sedlarska street. No other city in the world has a statue sticking out of manhole. Rubberneck has lost his head twice due to careless drivers, so the city decided to help him by erecting a road sign to warn drivers. (Look across the street from him to see a Communist era building in the historic center.)

Celebrating the 20 year anniversary of the 1989 Velvet Revolution, the overthrow of the Communist government, Hviezdoslav Square displayed a history of Communist times of Poland, Hungary, and Czechoslovakia through pictures. The square is also home to the eclectic Reduta building in Rococo, Baroque, and Art-nouveau styles (where the Slovak Philharmonic Orchestra is housed) and the Slovak National Theater. 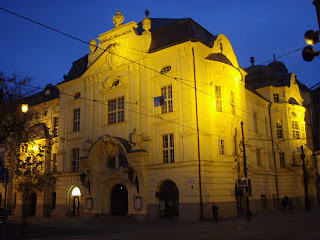 On our way to the Church of St. Elizabeth, we stopped at Deemer’s Teehaus, where I purchased black cherry black tea and lemongrass and apple roobios tea. 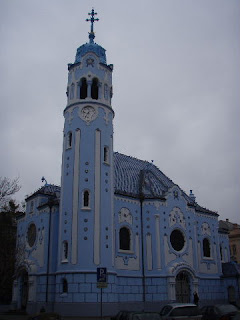 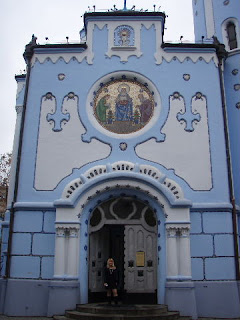 The Church of St. Elizabeth is also known as the Blue Church because of the color of its facade, mosaics, majolicas, and blue-glazed roof. The mosaic on the facade depicts the miracle of St. Elizabeth, and her relics are kept behind the main altar. We did pay another visit to the Blue Church in the morning before leaving because the church was so stunning in the dark, that we simply had to see it in the light.

Exhausted from walking all over Vienna in the morning, hiking up the hill to the Bratislava Castle, and traipsing all through the Old Town, we decided to relax for awhile at the Pulitzer. Tim had a cold Slovakian beer and I, having had Starbucks in Vienna, tried the Vienna coffee. The Vienna coffee is served in a tall glass and topped with whipped cream – a lot of whipped cream! Even Tim, who is not a coffee drinker, enjoyed the sweet taste of the Vienna coffee. Lingering there and letting our tired feet rest, we had another round and ordered food. Tim sampled the steak with Argentine sauce and roasted potatoes. 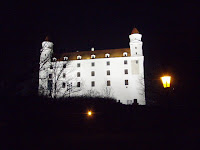 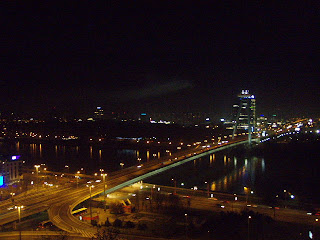 Refreshed, we headed back up the hill for a nighttime view and fireworks display over the city from Bratislava Castle. Bratislava is an interesting city and I am glad I didn’t let my first impressions scare me away!