You are here: Home / Europe / Austria / Weekend in Wien 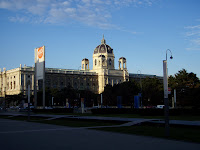 Vienna, or Wien in German, is the capital of the Republic of Austria. Blessed with sunshine and a clear blue sky, we got checked into our hotel and headed out to explore the city. The Museum Quarter was a short 10 minute walk from our hotel and the heart of the city. Formally the Imperial Stables which housed the horses and carriage of the Royal Court, the collection of old and new style buildings are now home to several museums such as the Leopold Museum, the Natural Histories Museum, and the twin Fine Arts Museum. 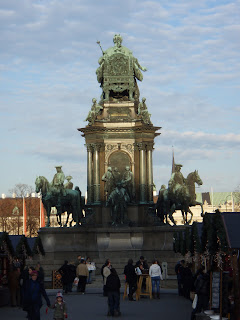 A small Christmas Market was open in the Maria-Theresien-Platz Square adjacent to the MQ. The Maria-Theresien-Platz memorial dominates the square. The Empress is seated on her throne, holding the Pragmatic Sanction of 1713 in her left hand. She is surrounded by major personages of her day: the standing figures are State Chancellor Kaunitz, Prince Liechtenstein, Count Haugwitz and her physician, van Swieten, while Generals Daun, Laudon, Traun and Khevenhüller are on horseback. The high reliefs depict illustrious figures from the fields of politics, economics and the arts, including Haydyn, Gluck and the child prodigy, Mozart. 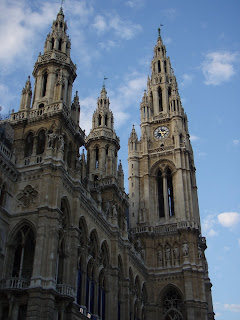 From here, we continued down the Ringroad to the Rathaus, or Town Hall. Built between 1872 and 1883, it is home to the mayor and City Council of the City of Vienna. On the top of the tower is the Rathausmann, one of the symbols of Vienna. Home to Vienna’s largest Christmas Market, it is only fitting that the Rathaus is decorated as an Advent Calendar. 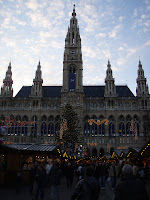 The beginnings of the Viennese Christmas Market date back to more than 7 centuries! In 1296, the emperor Albrecht I granted the privilege of organizing a “Dezembermarkt” (December Market) in order to ensure the supply for the urban population. In the 16th century, today’s “Christkindlmarkt” was named “Thomasmarkt” and took place around Christmas time and New Year’s Eve. Goods such as glass, leather, books, and toys can be purchased at the market. Most enjoyable for us was sampling all the delicious food! We tried chocolate covered bananas, Vienna sausages, and hot amaretto punch which was served in a collectible mug. 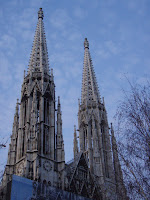 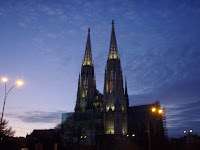 Carrying our steaming amaretto punches down the street, we stopped to enjoy them while admiring the setting sun over the Votivkirche, or Votiv Church. The Votivkirche is made out of white sandstone and has to be constantly renovated and protected from air-pollution and acid rain, which tends to colour and erode the soft stone. 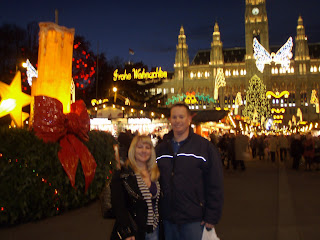 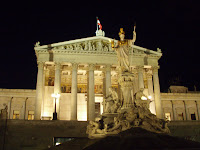 As night fell upon us (at only 4pm, mind you), the lights of the Christmas Market came alive for a truly spectacular scene. We ventured once again through the market and up the Ringroad to the Austrian Parliament building. The Athena Fountain (1893) stands in front, the four lying figures at the foot of Athena arerepresentations of the four most important rivers of the Austro-Hungarian Empire. They represent at the front the Danube and Inn, and in the back part, the Elbe and Vltava rivers.

We visited the Vienna Natural Histories Museum, which houses zoology, botanic, and mineral exhibitions. Darwin’s Evolution is a special exhibit on display to which I paid special attention since my History of Ideas course was discussing this topic at the time.

After a quick cat nap, we ventured back out for dinner. We found Neubauschenke where Tim sampled the Wiener Schnitzel, a cutlet of veal that is pounded flat, coated in flour, egg and breadcrumbs, and fried in clarified butter, with German potato salad. In Austria, the term Wiener Schnitzel is protected by law, and any schnitzel called by that name has to be made from veal. I had the Cordon Blue, a slice of Wiener Schnitzel rolled and filled with cheese and ham. Everything was delicious! Tim wasn’t too fond of the potato salad but I liked the sweet, vinegary taste and polished it off for him. 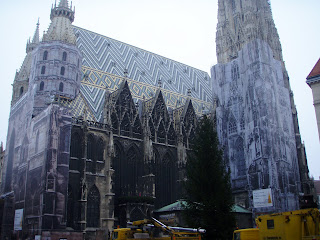 The morning brought a misty fog and brisk chill. After a stop in Starbucks (yay for Starbucks in Vienna!), we took a walk to Stephansdom, the most recognizable symbol in the city. It stands on the ruins of two previous churches and is 107 meters (350 ft) long, 40 meters (131 ft) wide, and 136 meters (445 ft) tall at its highest point. Soot and other forms of air pollution accumulating on the church have given it a black color, but recent restoration projects have again returned the building to its original white. 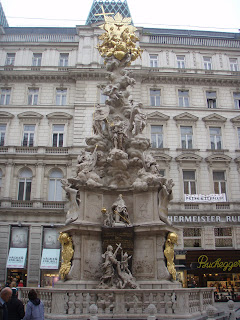 Continuing on down Der Graben, one of the most famous streets in Vienna, The Pestsäule (Plague Statue) holds court. In 1679, Vienna was visited by one of the last big plague epidemics. Fleeing the city, Emperor Leopold I vowed to erect a mercy column if the epidemic would end. In the same year, a provisional wooden column was inaugurated, showing the Holy Trinity on a Corinthian column together with nine sculpted angel (for the Nine Choirs of Angels).

Turning off Der Graben, Michaelerplatz is located at the old gates to Imperial Palace. Here Romans Ruins were found during excavation from 1990 – 1991. 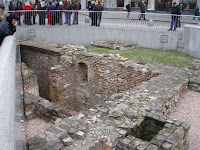