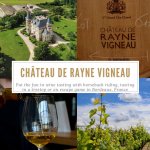 Who says wine tasting has to be stuffy sniff, swirl and sip affair? Certainly not Château de Rayne Vigneau, a 1st Grand Cru Classé in Bordeaux’s Sauternes sweet wine appellation. While other 1st Grand Cru Classé châteaux like Château Margaux remain shuttered to the public for visits and tastings, Château de Rayne Vigneau welcomes visitors from all over the world and knows how to have a whole lot of fun. From a horseback ride through the stunning their Sauternes vineyards to a tasting in the treetop of a 200-year old cedar tree with a birds-eye view of the château itself, a visit to Château de Rayne Vigneau is an experience you won’t soon forget.

The 1855 Classification of Sauternes and Barsac placed Château de Rayne Vigneau among the top wines of Sauternes. In fact, only Château d’Yquem was considered better nearly 200 years ago.

But the château was a wine making estate long before the 1855 Classification. It was originally named Vigneau de Bommes as a nod to the village of Bommes that the 84 hectare vineyard sits on a hill above and its’ owner, Gabriel de Vigneau. Documents mention the château and wine making activities as early as 1635. It’s also not too surprising that the château was already producing wines in the same league as Château d’Yquem in the 17th century. Étienne, the son of the château’s first owner, married the daughter of the Lord of Yquem in 1681 and took on the responsibilities of supervising the estate.

The Rayne part of the name came much later in the 19th century. It was 1834 when Madame de Rayne purchased the estate, though it was her great-nephew that renamed it Château de Rayne Vigneau in her honor. The renaming took place in 1867, following the 1855 Classification and a famous wine broker of the time ranking the château right after Château d’Yquem.

The estate remained in the Rayne family for over a century until it was purchased by Georges Raoux in 1961. As with many Bordeaux châteaux these days, it was purchased by the group Crédit Agricole in 2004. But unlike many estates owned by various companies in Bordeaux, the château itself is still privately lived in.

Sauternes is something truly special, and the visit fittingly begins in the vineyard. You’ll only truly understand botrytis, the fungus created by the unique micro-climate in Sauternes that sucks all moisture out to leave behind a raisin with a high sugar content, if you visit in the short period just before the harvest. But from this vantage point atop the third highest hill in Sauternes, you can easily see the rivers that converge to create the micro-climate of famously foggy mornings followed by hot, sunny afternoons.

These two rivers – the Garonne and the Ciron – are essential to producing Bordeaux’s sweet wine. Without the confluence of these two rivers, the unique effects of botrytis on the grape varietals grown would never happen. It’s been attempted to be reproduced elsewhere in the world, always unsuccessfully. So really, it’s a bit like magic.

From the red walls to the barrels with birds native to the southwest of France perched atop them, Château de Rayne Vigneau’s barrel room is a delight for all of your senses. The scents of caramel from the aging Sauternes tickle your nose. A row of beautiful canvases hangs down the center of the barrel room.

Here in the barrel room, we learn more about the particularities of producing Sauternes. Botrytis affects not only each individual vine differently, but really each individual bunch of grapes. Because of this, Château de Rayne Vigneau presses, ferments and ages each grape varietal by lot. This allows a lot of control to only produce the highest quality wine for their 1st Grand Cru Classé.

The visit concludes with the tasting, which includes from 3 – 6 wines depending on which visit you’ve selected. The tradition discovery visit and tasting, as well as horseback riding or the Sweet Escape game conclude with the tasting in the tasting room. Adventurous wine tasters can also choose the option to enjoy the 1st Grand Cru Classé in the 200-year old cedar treetop with a superb view over the château.

New at Château de Rayne Vigneau since 2018 is the Sweet Escape, an escape room game. If you’re never played one, we like to equate it to the game of Clue come to life. With a team of 3 – 8 people, you solve a series of puzzles using clues and hints to eventually solve a mystery and “escape” from the room by unlocking a final puzzle.

Once you’ve tried an escape room game, you’re hooked! Having tried out all of the various mysteries at the Escape Hunt Experience Bordeaux, we were keen to test our mystery solving skills at this latest escape room. We raced against the clock, motivated by a prize of our wine tasting of four Château de Rayne Vigneau wines once we escaped.

Without giving too much away, we’ll just say that we loved that the game incorporated elements of wine tasting and history of the château in to it. It’s a lot of fun and a unique way to spend an afternoon wine tasting in Bordeaux.

The treetop tasting at Château de Rayne Vigneau is only for the truly adventurous. It’s definitely the most physically demanding wine tasting we’ve ever done, but the view and unique experience of tasting Sauternes in a 200-year old tree is worth a little bit of sweat.

You’re given a safety harness, which Vincent (no doubt an expert tree climber at this point) ensures is fitted and secured properly. The climbing gear is a static climbing rope, just like the kind arborists use to climb trees. The way it works is you stand with one foot in the loop attached to the climbing rope, and push down with your foot to create a sort of pulley system for yourself to help you ascend. With the gloves also provided by Château de Rayne Vigneau, you push the hitch further up the rope and repeat pushing your foot down in the loop. It does take some arm strength to pull yourself up.

Vincent is incredibly patient if you’re just not getting the hang of it and helps every step of the way.

Once up in the tree, it’s time to relax while a picnic basket with the wine and glasses is hoisted up through an opening in the table. Everything is secured with ropes, so you don’t need to worry about dropping your glass or anything out of the tree.

From your perch, you have a birds-eye view of the château, which the owners still live in, and is otherwise sort of hidden by the trees when you’re on the ground.

Our Sweet Escape was hosted by Château de Rayne Vigneau in order to bring you this story. However, Luxe Adventure Traveler maintains full editorial control of the content published on this site. As always, all thoughts, opinions, and enthusiasm for travel are entirely our own.