The Côte d’Azur covers the coastline from the Italian border through the sovereign state of Monaco to Saint Tropez in the west. The name was given to the coast by the writer Stéphen Liégeard in his book, La Côte d’azur, published in December 1887.Liégeard was born in Dijon, in the French department of Côte-d’Or, and adapted that name by substituting the azure blue color of the Mediterranean for the gold of Côte-d’Or. 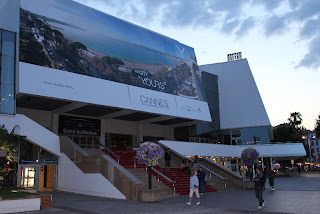 With the sun glistening off the azure blue Mediterranean, luxury cars zipping along La Croisette, casinos, villas, and other assorted glitz and glamor, it’s hard to image Cannes was once just a small fishing village. La Croisette is Cannes’ catwalk beside the sea and the center of the city’s tourist activity. 19th century villas and luxury hotels, such as the Ritz and the Hôtel de Villeline, designers such as Louis Vuitton, Prada, and Gucci, and private beach clubs line the boulevard. It is the place to see and be seen. 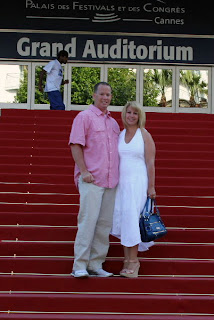 Wander down La Croisette to the Palais des Festivals, where stars of the screen gather and watch films screened during the world’s most famous film festival, the Festival de Cannes. It’s irresistible not to pose on the red carpet leading up to the entrance. Also surrounding the Palais is the Allee des Stars, a chain a bronze hand prints of the stars. 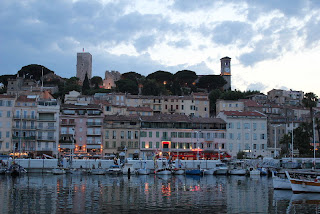 Le Suquet, or the Old Town, overlooks the west end of the port. The 12th-century Tour de Mt. Chevalier, ramparts and 12th-16th-century church Notre-Dame-de-l’Espérence give a touch of medieval flavor to the city. The Le Suquet area has narrow streets climbing up and around the hill, with a stunning view from the top. Standing on the ancient rampart wall in front of the church, you can see east across the city, the port and the bay to the Cap de la Croisette, and to the west across the Gulf of La Napoule to the Massif de l’Esterel mountains. 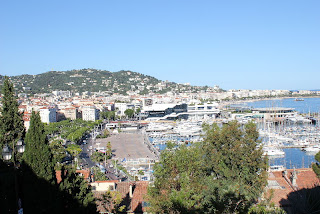 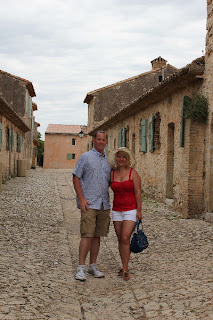 The Île Sainte-Marguerite is the largest of the Lérins Islands, about 1/2 mile offshore from Cannes. The village of Sainte-Marguerite is made up of about twenty buildings. Most of these are home to fishermen, but there is also a small boatyard and one or two restaurants. 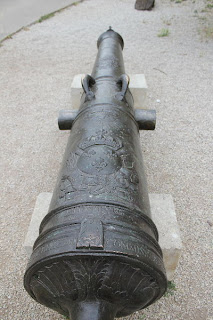 L’Incounnu (The Stranger) stands guard at the entrance to the fort. L’Incounnu is a French 24-pounder siege gun cast in Strasbourg in 1715. It was designed for siege warfare but is also capable of a 12kg iron cannonball up to 4 kilometers.

During the Thirty Years War, the Spanish occupied the island and built the fort from 1635 to 1637. After the Spanish were defeated, the French army completed the area’s fortification. A prison was added to its military function in 1637 which lasted until the twentieth century. The Fort Royal became home to a number of famous prisoners until its closure in the 20th century: Abdel Kadir (an Algerian rebel leader), Marquis Jouffroy d’Abbans (inventor of the steamboat) and Marshal Bazaine (the only successful escapee from the island) have all spent time there. It’s most famous prisoner is the Man in the Iron Mask, a mysterious prisoner whose identity remains unknown. 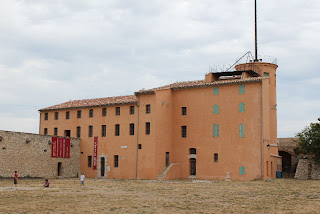 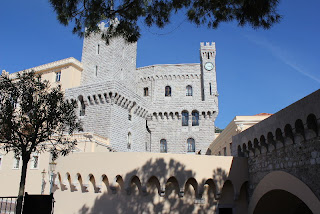 Monaco-Ville is the original fortified town of Monaco and home to the Palais Princier, the official residence of the Prince of Monaco. The palace is a blend of architectural styles; the principal facade appears as a terrace of Renaissance style palazzi from differing periods of the Renaissance era. This Renaissance architecture seems to mask earlier fortifications, the towers of which rise behind the differing classical facades. St Mary’s Tower was rebuilt by Charles III to resemble a medieval fortress. To the right is Albert I’s clock tower in white stone from La Turbie. Monaco-Ville also makes a great place to watch the Monaco Grand Prix from above to see all of the action as Formula 1 cars zip around the famous course! 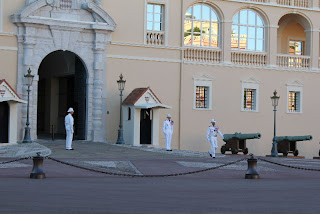 Sentries and cannons guard the entrance to the restored palace and the colorful changing of the guard occurs every day outside the Palais at 11:55 am. Today the palace is home to Grace Kelly and Prince Rainier’s son and successor, Prince Albert II.

The Cathédrale Notre-Dame-Immaculée is also known as the Saint Nicholas Cathedral, was consecrated in 1875, and is on the site of the first parish church in Monaco built in 1252 and dedicated to St. Nicholas. Many of the Grimaldis are buried here, including Grace Kelly and more recently, Rainier III. 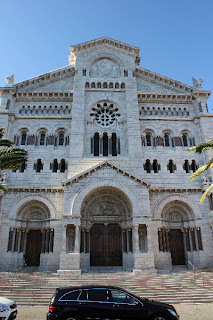 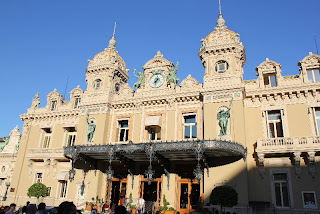 Monte Carlo has been visited by royalty as well as the general public and movie stars for decades. It’s no wonder! As you arrive at the Place du Casino, the sight of this masterpiece by the famous architect Charles Garnier will take your breath away.

During 1854 gambling was legalized by Prince Florestan I. The first casino was opened during 1856 in a villa near the harbor. Prince Charles III ordered the construction of a new complex named Monte Carlo. A new casino was also part of this plan. The construction of the current building started during 1858. To make the casino more successful a 50-year concession to operate the gaming rooms was granted to a private individual named François Blanc during 1861. The new facility opened during 1863. Adding to the glamor and legend of the poker tables and the roulette wheels is that Ian Fleming in his first James Bond book includes it as a setting in Casino Royale, and the 1995 Bond film Goldeneye includes it as one of the locations. 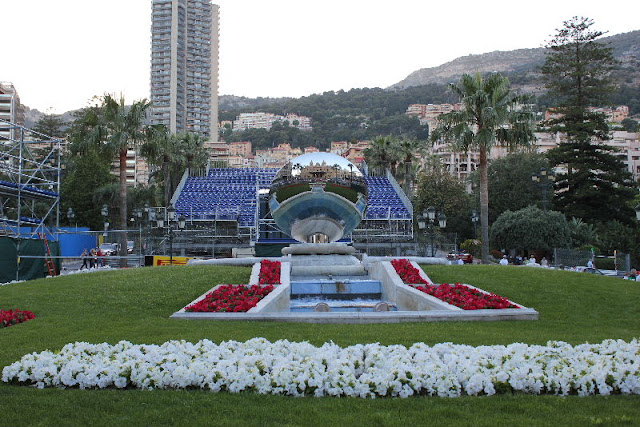 The Casino has been designed around an atrium surrounded by 28 onyx columns, behind which the Salle Garnier, an Italian theater decorated in red and gold is the veritable miniature replica of the Paris opera house. 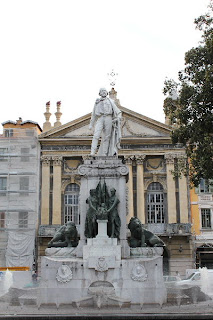 The area of today’s Nice is believed to be among the oldest human settlements in Europe. One of the archaeological sites, Terra Amata, displays evidence of a very early usage of fire. Around 350 BC, Greeks of Marseille founded a permanent settlement and called it Nikaia, after Nike, the goddess of victory.

The Place Garibaldi stands out for its architecture and history. It is named after Giuseppe Garibaldi, hero of the Italian unification (born in Nice in 1807 when Nice was part of the Napoleonic Empire, before reverting back to the Kingdom of Piedmont-Sardinia). The square was built at the end of the 18th century and served as the entry gate to the city and end of the road to Turin. A statue of Garibaldi, who was fiercely in favor of the union of Nice with Italy, stands in the center of the square. It is a crossroads between the Vieux Nice (old town) and the town center. 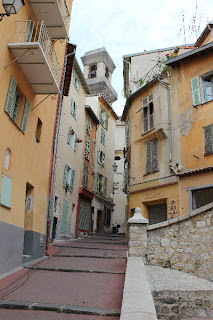 With its narrow, shadowy streets, cozy squares, colorful markets, baroque churches and jumble of pastel houses, Vieux Nice looks and feels much as it must have about two centuries ago.  We stumbled upon a road leading up to Le Chateau (Castle Hill) at the end of Vieux Nice. The name refers to the castle which was here once. On top of the mountain is a nice square with balustrades, the Terrasse Frédéric Nietzsche. From here one has a magnificent view over Nice. 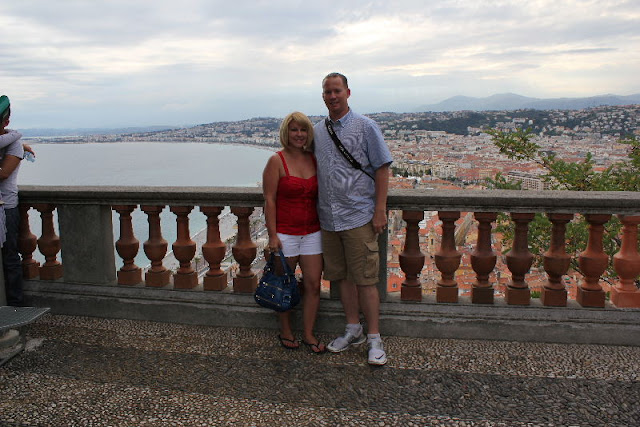