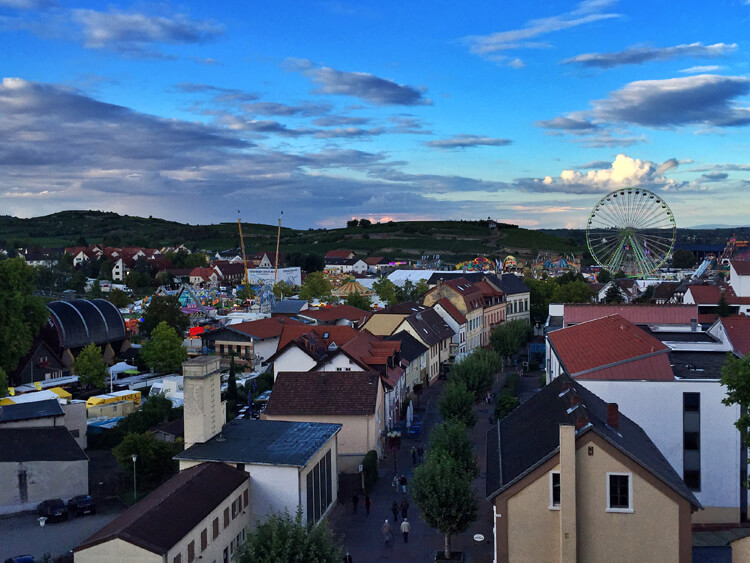 Time for a confession. Drinking liter after liter of beer while sitting around in a tent with 7500 of my closest friends has about the same appeal to me as eating fried tarantulas in Cambodia. I did it once – the drinking beer, not eating fried tarantulas – and while I’m glad to have experienced it, I’m happy to leave Oktoberfest to Tim for a guy’s trip. But when I heard about the Dürkheimer Wurstmarkt, essentially the Oktoberfest of wine festivals, I couldn’t grab a glass fast enough. These, I thought, are my people. 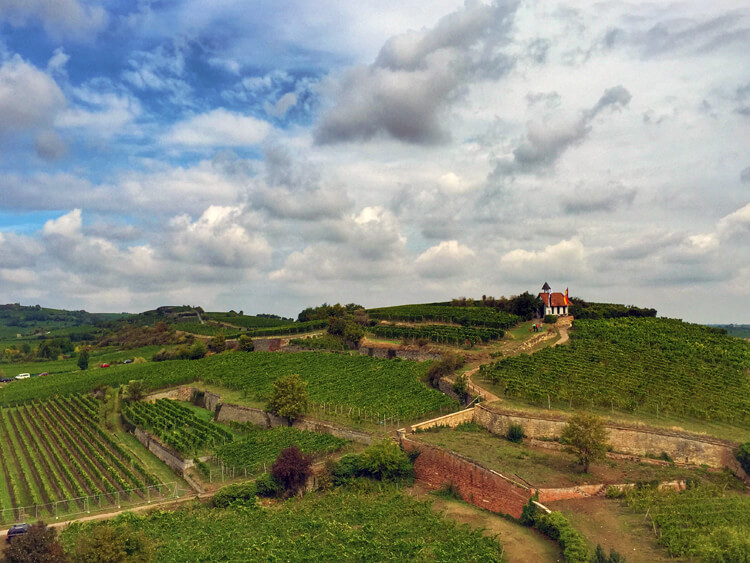 The Wurstmarkt started when farmers would sell produce to pilgrims heading to Michaelskapelle (St. Michael’s Chapel)

The Dürkheimer Wurstmarkt, which literally means sausage market, is the world’s largest wine festival and has been celebrated for over 590 years. It began in the 12th century when farmers and wine growers would gather to sell their harvest to the pilgrims heading up to Michaelskapelle (St. Michael’s Chapel) on the Michaelsberg mountain. Originally called the Michaelismarkt, people began calling the 3-day festival Wurstmarkt in 1832 because of the massive amount of sausages sold during the festival.

With the fair like atmosphere, food stalls, carnival rides and temporary tent structures where the festive “Prost!” erupts from the crowd as glasses are thrust into the air every few minutes, you’d almost think you were at Oktoberfest. Except the steins of beer are replaced by glasses of wine from Germany’s second largest wine region.

It’s too bad that the Dürkheimer Wurstmarkt only happens over two weekends, because I’d need two full weeks to try all 150 different wines from the Bad Dürkheim region. I found everything from Riesling to Rosé, and even special wine like ice wine which is made by allowing the grapes to freeze on the vine.

It looks tame at opening time, but after a few schoppen (the traditional wine glasses of the area that hold about half a liter) the tents are rockin’

The large wine halls have live music and popular songs that the bands play (and probably a little to do with the amount of wine drunk) had people dancing on the tables. The smaller Schubkärchler (small wine stands with more intimate round tables and smaller wooden picnic-style tables) were a bit more my speed, especially on a Sunday morning after drinking a few schoppen (the traditional wine glasses of the area that hold about half a liter) the night before. 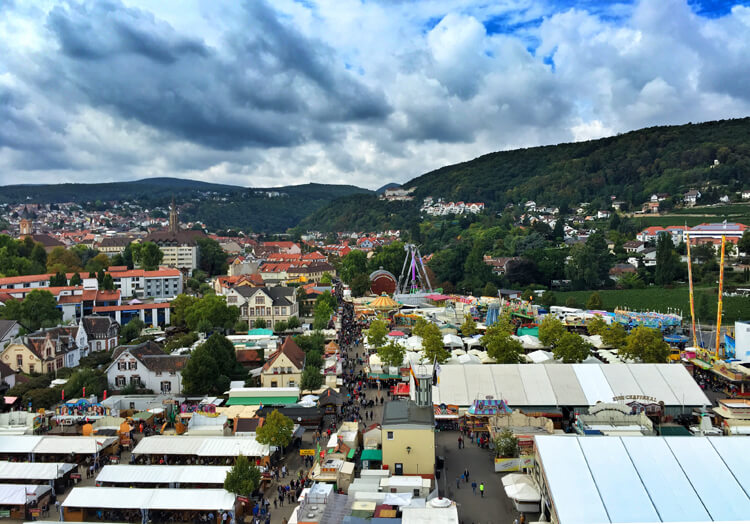 Can you spot the Dürkheimer Fass?

Or you can have a glass of wine in one of the most unique places you could ever sip vino – inside the world’s largest wine barrel. The Dürkheimer Fass sits in the heart of Bad Dürkheim and at the heart of the festival. Fritz Keller, a local wine grower, built the giant barrel in 1934 as a memorial to Palatine and German wine and it took some 200 pine trees to make it. Until 1934 the giant barrel at Heidelberg Castle had been the world’s largest wine barrel, but unlike that barrel the Dürkheimer Fass has never held wine. Instead it holds about 450 people who enjoy German wines at the rustic wine bar and restaurant.

And if you think choosing which wines to try is a difficult feat, just wait until you see the rows upon rows of food stalls. Crepes, donuts, every kind of sausage imaginable including a stall that offers and challenges you to finish off a ½ meter long sausage (over 1 ½ feet), fries with a toppings bar, roasted chestnuts and even chocolate dipped chili peppers are just a handful of the delicious options available. It was a good thing I was hiking 40 kilometers of the Rheinsteig Trail after my visit; I could eat and eat and eat some more without guilt. And I did!

Adventure and Wine on the Rheinsteig Trail 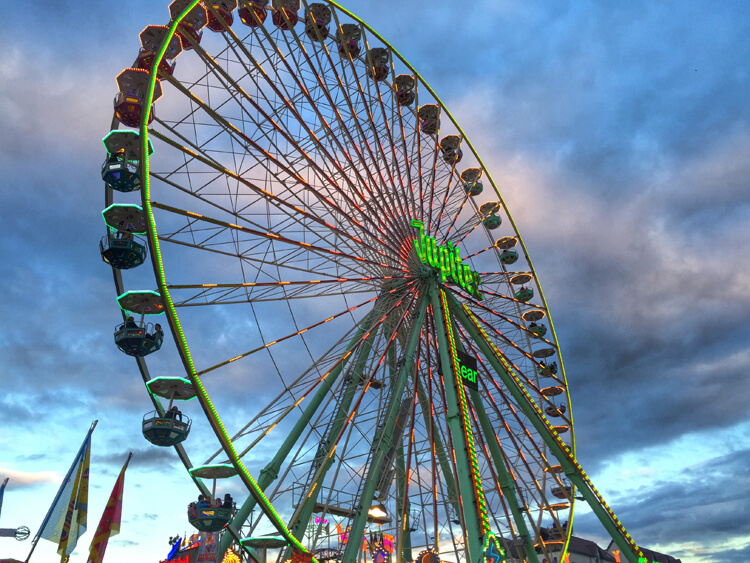 There are plenty of rides, games and attractions to entertain all ages. Children squealed with delight as tea cups twirled, but my favorite was the giant Ferris wheel that sits at the edge of the festival. You can really take in all that the Dürkheimer Wurstmarkt has to offer as you’re gently whisked up toward the sky. 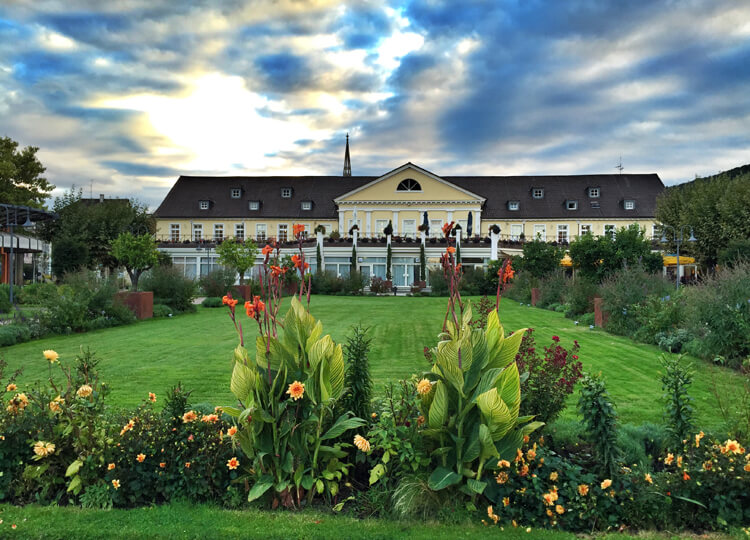 Bad Dürkheim is a spa town nestled into the hills of the Palatinate Forest and surrounded by vineyards. It was in 1338 that salt springs were discovered here and the town became associated with wellness, as well as wine.

Not only was I steps away from the action of the Dürkheimer Wurstmarkt, as a guest of the Kurpark-Hotel I had access to the lovely spa amenities including a hammam, saunas and treatment rooms, as well as a swimming pool and a fitness center. The rooms are modern and simple, but there is a certain charm in knowing you’re a guest in the former Castle Leiningen.

Getting ThereWhere To StayDürkheimer Wurstmarkt
Bad Dürkheim is about 70 kilometers from Frankfurt and easily accessible via Deutsche Bahn train.
Stay at the Kurpark-Hotel. Rooms start from €99 per night and include breakfast, use of the Vitalis wellness and fitness area and free entrance to the casino. Parking is available for a fee onsite.
Dürkheimer Wurstmarkt will be held September 9 – 13 and 16 – 19, 2016.

My visit to Bad Dürkheim and Dürkheimer Wurstmarkt was provided by the German National Tourist Office in order to bring you this story. However, Luxe Adventure Traveler maintains full editorial control of the content published on this site. As always, all thoughts, opinions, and enthusiasm for travel are entirely our own.