You are here: Home / Europe / Italy / Tasting the Original Tiramisu at Le Beccherie

Many so-called Italian dishes aren’t really Italian at all. Spaghetti and meatballs, chicken parmesan and loads of other dishes you’ll find on the menus of many Italian restaurants in the United States are modifications of classic Italian recipes because immigrants had to work with the ingredients they had. I always thought that tiramisu, perhaps the most famous Italian dessert found just about everywhere in Italy, was also an Italian-American creation. It was only a few years ago that I learned tiramisu was invented here in Italy, and in a nearby town to where I’ve been living for the last seven years no less. The very restaurant where the coffee-flavored dessert was invented in the 1960s still serves up that very recipe today. So off we went to sample the Le Beccherie tiramisu. 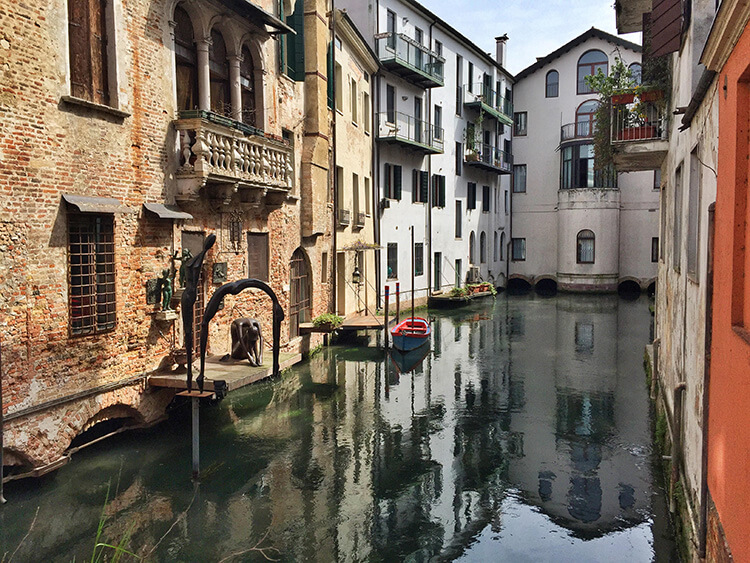 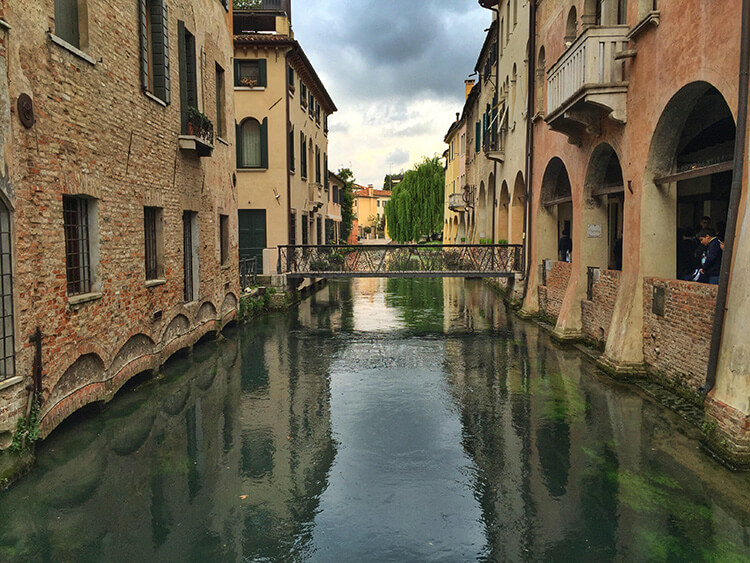 Le Beccherie is located in the small town of Treviso, easily accessible from Venice on a 30-minute train ride. Treviso, the production center of Prosecco and one bookend of the Prosecco Road, is well worth a visit, though, even if you aren’t keen on the Italian dessert. It counts itself among some of the Veneto’s best preserved walled towns and sits at the confluence of two rivers. Just 3000 people live inside the historic center and it’s relatively off the tourist path, so you can wander the cobbled streets and linger on the numerous bridges that cross the canals running through the city without all the crowds of Venice. And while Milan is home to the fashion power houses like Valentino and Armani, Treviso is home to the more affordable fashion retailers including Benetton, Sisley and Stefanel. Gorgeous scenery, good wine, shopping and home to one of Italy’s most beloved desserts – what’s not to like?

The Luxe Adventure Traveler Guide to The Prosecco Road

The original Le Beccherie opened in 1939, but it wasn’t until 1969 when tiramisu was invented at the restaurant by owner Aldo Campeol‘s wife, Ada. Accounts say she wanted a pick-me-up, which is the literal translation of tiramisu, after the birth of her son. Ada made a light-as-air layer cake from ladyfingers dipped in coffee, mascarpone cheese, sugar, cocoa powder and egg yolks.

In the 1970s the dessert became popular among Treviso’s bordello customers as an aphrodisiac. The first printed mention of the word tiramisu came in 1980, according to traces done by the Italian-language dictionary Sabatini Coletti. It was then that recipes for the dessert started appearing in cookbooks. The mayor of the town even campaigned for the European Union to recognize Treviso officially as the home of tiramisu just as Naples has been recognized as the home of pizza in 2014.

I mentioned the original Le Beccherie. That’s because after 76 years in business, the restaurant was feeling the effects of the economic crisis here in Italy and closed their doors in March 2014 much to the dismay of many who were proud of the birthplace of tiramisu. Le Beccherie was revamped and re-opened with a modern meets traditional vibe in the menu and a very chic, modern interior design. The restaurant isn’t operated any longer by the Campeol family, who are credited with the invention of tiramisu, but the original recipe is still supposedly served. 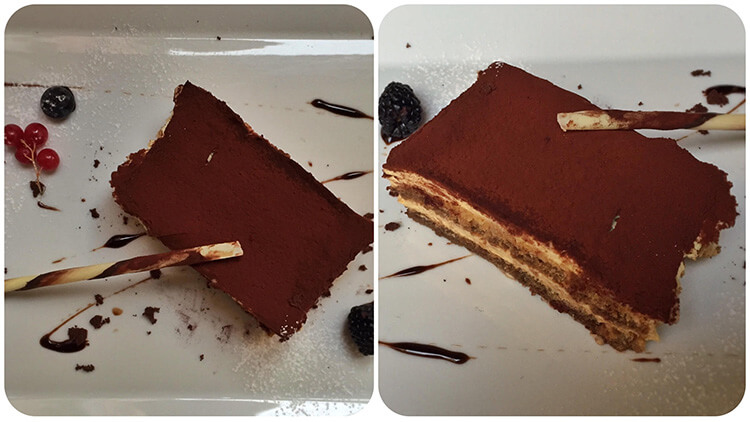 The original tiramisu at Le Beccherie

Both the original and a deconstructed version are offered at Le Beccherie. We wouldn’t be good journalists if we didn’t try both – it’s a tough job, but someone has to do it! While both were good, the mark of a good tiramisu for me is when I can take a blissful bite without choking on cocoa powder. The original had just a bit too much for both Tim and I’s liking. The deconstructed tiramisu mixed the cocoa powder well into the dessert and was a much more delicious bite, allowing us to savor all of the flavors. 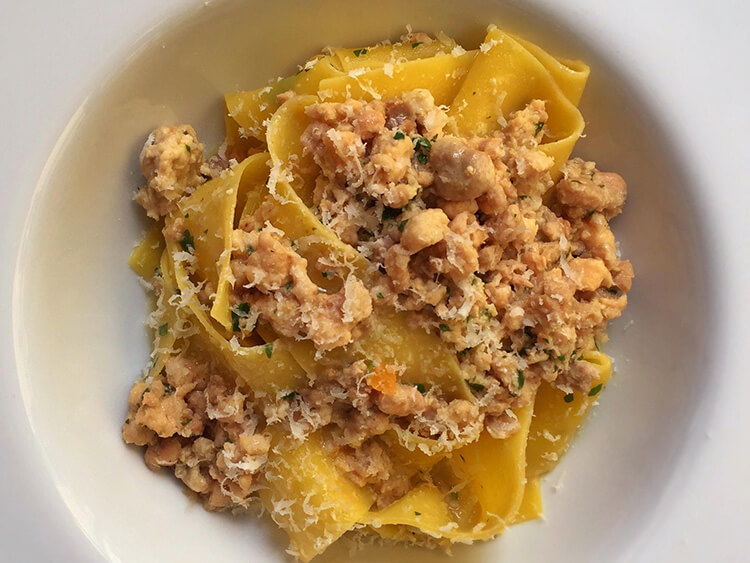 Don’t just go for the tiramisu, though. The menu offers a variety of classics from the Veneto like pasta e fagioli (which is entirely different than the Americanized version Olive Garden serves up) and tagliatelle with wild rabbit ragu. We can definitely highly recommend the tagliatelle with the rabbit ragu, as it was extremely flavorful. We also tried the gnocchi and ravioli, both of which weren’t anything particularly special in our opinion. 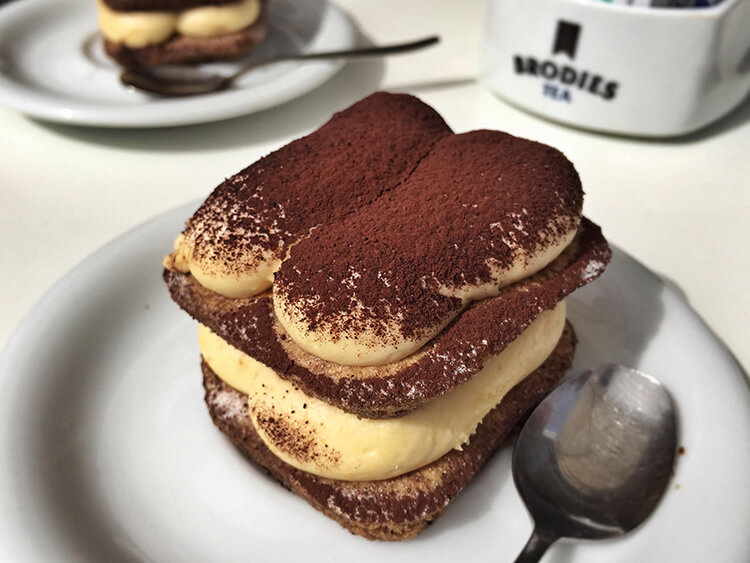 The tiramisu at Pasticceria Nascimben is light-as-air

Treviso has plenty of other restaurants as we would say that Le Beccherie is priced at Venice restaurant prices. If you’re looking for an excellent traditional tiramisu, try the tiramisu at Pasticceria Nascimben tucked away in the tiny Piazza dei Signori and who has been making pastries and Italian treats there since 1865.

Getting ThereWhere To Find Tiramisu
Treviso is easily reached from Venice on Trenitalia in approximately 30 minutes.